The Blue Oval's sales in China were down in February, but 2016 is still looking bright for Ford's growth ambitions in the Middle Kingdom. Here's what's happening.

What's happening: Ford Motor Company (F -1.56%) said on Monday that its sales in China fell 9% in February. But that's not the whole story.

What it means: First of all, it doesn't mean that Ford is suddenly having a bad time in China.

When we look at auto sales in China in the first two months of the year, we have to take the Chinese New Year celebration into account. It's a major celebration. Many Chinese businesses, including new-car dealerships, close for a week around the New Year's holiday.

But here's the thing that complicates our year-over-year auto sales comparisons: Chinese New Year is a lunar holiday, meaning that the date isn't driven by the calendar. Sometimes it falls in late January and sometimes in February.

Long story short: Most analysts add January and February together when looking at year-over-year comparisons for new-car sales in China.

So how did Ford do by that standard?
Not so badly, it turns out: Ford's overall sales in China were up 18% through the first two months of 2016.

But there's good news and bad in that figure. Ford has two joint ventures in China, and one is doing a lot better than the other at the moment. Changan Ford Automobile makes "passenger cars," including popular SUVs like the Ford Edge and other vehicles familiar to Americans.

Changan Ford sales were up 29% in the first two months of the year, led by strong sales of the Escort, an affordable compact sedan developed specifically for the Chinese market. (Ford also offers the familiar Focus in China, but it's positioned as a deluxe model, an upscale alternative.) The new-for-2016 Edge, which is offered in a seven-passenger ("three-row," as Ford calls it) version in China, has also been a very hot seller. 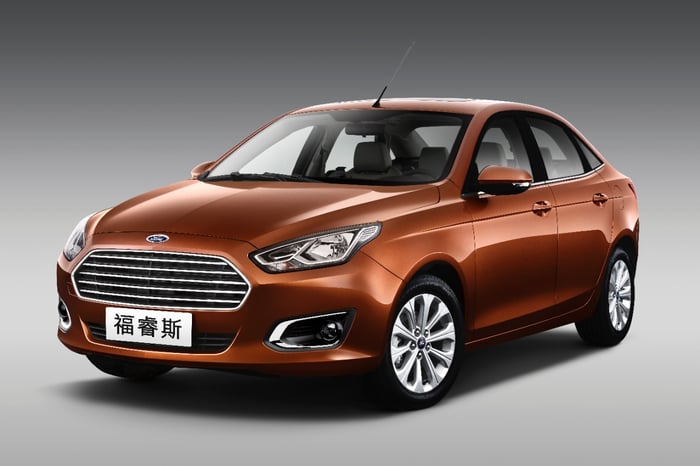 The Ford Escort, launched in 2014, is a simple, affordable compact sedan developed specifically for the Chinese market. Sales were up 15% in February. Image source: Ford Motor Company.

But Ford's other joint venture isn't doing quite as well. That venture, called Jiangling Motors Corporation, builds several versions of Ford's Transit commercial vans as well as the truck-based Ford Everest SUV. Sales at Jiangling Motors were actually up slightly (3%) in February, but they're down 13% through the first two months of 2016. Sales of commercial vehicles across the board have slumped in China over the last several months, as the country's construction boom has ebbed.

How does that compare with other big names?
Ford's gains in the mainstream passenger-vehicle market look pretty good when compared to many of its global-brand rivals.

What does it mean for Ford investors?
It means that despite the much-talked-about Chinese economic slump, Ford is still managing to post sales gains and increase its market share. As we saw in Ford's fourth-quarter results, it's also managing to improve its "mix" in China, meaning that it's selling more of its more profitable products (like that all-new Edge).

With two-thirds of the first quarter in the books, it looks like those favorable trends have continued in Ford's operation in China. That bodes well for Ford's first-quarter earnings, at least from its Asia-Pacific region.