The company has shown that it can pull off adding new stores while maintaining profitability.

Potbelly Corporation (PBPB -2.15%) saw its stock jump after it reported earnings on Feb. 16, helping boost it for the month.

The company's shares closed at $10.70 on Jan. 29, rising to $12.55 on Feb. 29, when trading closed for the month, a 17.3% gain, according to data provided by S&P Global Market Intelligence. The run-up started when the sandwich shop chain released its Q4 and full-year numbers on Feb. 16. 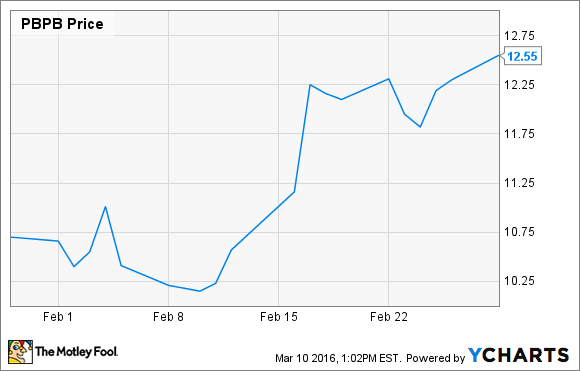 So what: Potbelly put up solid numbers during a year in which a number of quick-serve chains struggled to grow at all. Though the chain is still relatively small, it showed that it can add locations while maintaining profitability. That's a good sign for 2016, when it plans to ramp up growth even further, adding another 55-65 locations, including 45-50 that would be company-owned.

Now what: It's all about growth as the sandwich chain heads into 2016, according to CEO Aylwin Lewis.

"The 2015 results reinforce our ability to achieve our long-term financial goals of at least 10% annual new unit growth for the foreseeable future, low single-digit comps, at least 20% annual adjusted net income growth and at least 25% return on shop investments," he said in the earnings release.

Potbelly has been on a slow and steady growth path, and there is no reason to believe it will stumble in 2016. The chain is expanding in a similar fashion to its past-year growth, so it should be able to deliver on Lewis's promises as it continues to add company-owned stores as well as franchisees.

Daniel Kline has no position in any stocks mentioned. He has never eaten at a Potbelly because he has a gluten allergy making sandwiches a challenge. The Motley Fool has no position in any of the stocks mentioned. We Fools may not all hold the same opinions, but we all believe that considering a diverse range of insights makes us better investors. The Motley Fool has a disclosure policy.