GE had a fantastic 2015 in terms of divesting its GE Capital holdings. But 2016 may not be going according to plan.

When the going gets tough, the tough get going. General Electric (NYSE: GE) knows a thing or two about that. Its current transition, led by CEO Jeff Immelt, is anything but easy.

The storied company is moving its headquarters to Boston, selling its appliances unit, and -- most importantly for shareholders -- divesting itself of the capital assets that weighed so heavily on its earnings during the Great Recession. The last part is the most difficult and is also the most critical.

But recent developments -- or, rather, the lack thereof -- raise questions about the company's ability to fully execute its plans.

The story so far
In 2015, GE projected that it would return up to $90 billion to its shareholders by 2018 through a combination of dividends, with GE Capital asset sales, and through its Synchrony Financial (NYSE: SYF) spinoff. The spinoff resulted in a reduced share count, which removed $20.4 billion of GE shares from the market, effectively creating that much value for the remaining shareholders.

Investors who participated in the share swap may wish they hadn't. Synchrony shares have mostly underperformed GE shares since the swap was tendered in November, even after a strong fourth-quarter earnings report in late January.

At the beginning of February, the stock fell off a cliff, dropping 14% on heavy volume along with other financial stocks, but on no company-specific news, so there's no reason to think the thesis for the stock has fundamentally changed. 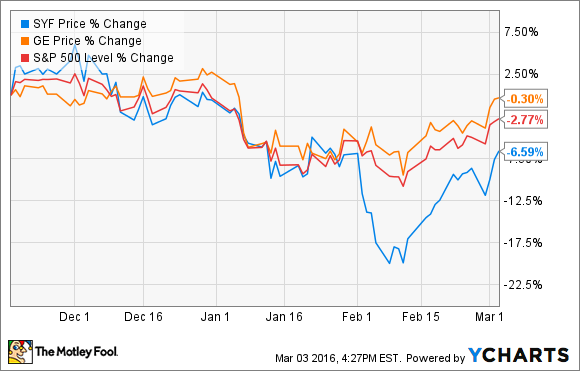 Along with the $20 billion from the Synchrony spinoff, GE was going to issue $35 billion in dividends, which it is on track to do. The remaining $35 billion was to come from sales of GE Capital assets. But while some previously announced sales continue to close, new sales seem to have tapered off.

Time will tell
In early December, almost eight months to the day since GE announced its plan, it reported that it had signed deals worth about $146 billion in "ENI," the metric by which it measures sales. That's an average of about $18.5 billion in ENI per month.

Months went by with no reports of new transactions, but on March 1, the company announced it had signed deals totaling $157 billion in ENI. That means GE signed deals to sell assets worth just $11 billion in ENI in the three intervening months, or an average of about $3.7 billion per month -- a far cry from the previous rate.

If GE could maintain the rate of $3.7 billion in ENI in average asset sales per month, it would take just under a year to dispose of the remaining $43 billion ENI in assets. That would keep GE well ahead of its 2018 deadline. But the rate seems likely to fall even further as the more desirable assets get sold, leaving ones that are more difficult to get rid of.

Upping the ante
Even if GE is able to sell all of the assets it plans to sell, and collect the $35 billion it plans to collect, getting that cash to shareholders may be easier said than done. GE Capital is still classified as a non-bank SIFI, a status that restricts how much cash it can return to its parent company. GE Capital plans to apply for de-designation as a SIFI this year, but there are no guarantees that it will be successful. And if it isn't, well, that $35 billion isn't finding its way into investors' pockets anytime soon.

Immelt, though, seems confident that his plans will come to fruition. So confident, in fact, that in his recent letter to shareholders, he declared that GE would return "roughly $100 billion" to investors in buybacks and dividends by 2018 -- $10 billion more than was promised last year. Some of this cash may be coming from the $5.4 billion appliances unit sale, but Immelt doesn't specify.

The Foolish bottom line
In spite of the slowdown in asset sales, and the uncertainty surrounding sale prices and SIFI status, GE seems likely to be able to execute its GE Capital divestiture plan by 2018. That said, it's not as cut and dried as it seemed just last year. Intelligent investors will keep an eye on the pace of GE Capital asset sales, and especially on the company's SIFI status -- because if these plans get derailed, the stock may take a short-term hit. However, the fundamental thesis for buying GE-its economy of scale, brand power, and ability to invest in and develop new technology-remains unchanged.