The past year has proven decidedly more down than up for digital radio innovator Pandora Media (NYSE:P). 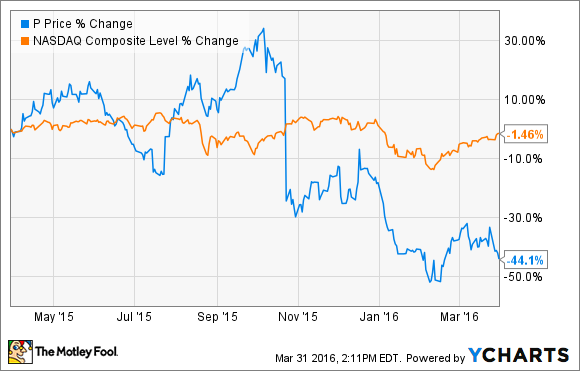 After the firm's bruising post-earnings sell-off in late October, Pandora's stock has trended steadily down. These clear and continued struggles led to rumors earlier this year that Pandora might be looking to sell itself. And even more recently, the firm once-again reshuffled its leadership, which will unfortunately do little to reverse the course of a company dealing with more fundamental problems than its C-suite.

The most important news in this week's press release about Pandora's management team reshuffle was that it brought back founder and former CEO Tim Westergren to re-assume the CEO position. In the characteristically optimistic, "ra ra" nature of such announcements, Westergren is quoted as saying:

I am incredibly excited about the future of Pandora. We're on the cusp of realizing an extraordinary vision. ... We are pursuing a once-in-a-generation opportunity to create a massive, vibrant music marketplace. We have the audience, the technology infrastructure, the monetization engine and most importantly the right team with the passion and commitment to do it.

All of this sounds great on paper. However, Pandora's new executive team has its work cut out for it to reverse the firm's money-losing ways.

A more fundamental flaw
Pandora's problem isn't a leadership issue. The company's core ad-based online radio product simply doesn't scale. Not only has the company never turned a profit in its 16 cumulative years of existence, but it has failed to do so even as sales have skyrocketed. 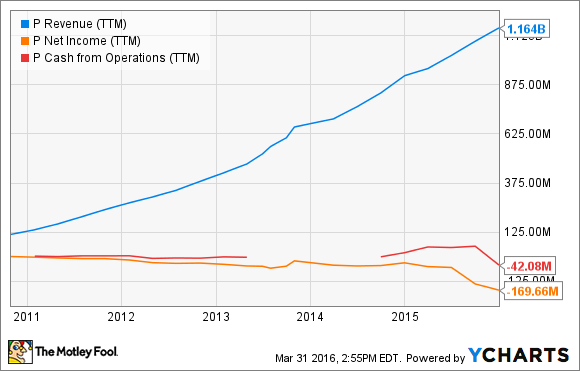 Worse yet, the firm's average per-song royalty rates will increase in 2016 from $0.00153 to $0.00176, creating an additional headwind for a company working diligently to optimize its average revenue per user.

Worse yet, Pandora's efforts to launch an on-demand product this year could prove too little too late. Apple Music continues to steam ahead with its exclusive content strategy. SoundCloud has launched its own subscription service . And perhaps most importantly, Spotify recently raised $1 billion in new financing to invest in growth and conversion initiatives, which lays the groundwork for a Spotify IPO in the not-too-distant future. Presumably, when Pandora launches its new on-demand service, it will be doing so into an increasingly crowded space.

There's also the potential acquisition angle to consider. As mentioned earlier in this article, The New York Times reported in February that Pandora has retained Morgan Stanley to explore a possible sale of the company. However, given the rapid evolution of the digital music space and Pandora's profitless history, I find myself questioning what value a strategic buyer might gain by spending more than $2 billion on Pandora. The numbers simply don't add up.

To be fair, Westergren is something of a visionary in the music industry. He founded Pandora and its Music Genome Project in 2000, at a time when the Internet remained largely a novelty to many investors and music fans. Westergren could conceivably have concocted an equally prescient rescue plan to help steer his company toward calmer, more profitable waters. However, as far as bankable scenarios go, this one doesn't seem to have much in the way of evidence to support it. As such, I'm skeptical that new management alone can right Pandora's ship.