Please ensure Javascript is enabled for purposes of website accessibility
Log In Help Join The Motley Fool
Free Article Join Over 1 Million Premium Members And Get More In-Depth Stock Guidance and Research
By Lee Samaha - Apr 14, 2016 at 9:25AM

Competition in the bulk power market is always fierce, but what can the industrial giant and rivals like Siemens expect from end demand in the future?

Power matters to General Electric Company (GE 1.30%). In fact, the segment is the company's largest industrial business, contributing 25% of industrial segmental profit in 2015. Within the power segment, gas turbines -- traditionally the company's most important product -- are a key part of its future prospects. But what can investors expect in the next five to 10 years from end demand from bulk power spending, and how is General Electric Company positioned in this market?

Positive spending outlook, but risks remain
Ultimately, spending on bulk power solutions is determined by a combination of end demand for electricity and the capacity of the network in question to deal with demand loads. Focusing on the domestic market, the projections of the North American Electric Reliability Corporation (NERC) -- an authority charged to ensure and enforce reliability standards -- is a good place to start.

Delving into NERC's 2015 Long-Term Reliability Assessment, the general picture is of a moderate outlook for utility spending in the next five years, but conditions could improve in the medium term. It's a broadly positive outlook, but subject to economic conditions. NERC usually uses a metric called the reserve margin -- a measure of how much additional resources a network has to meet demand -- to judge network capacity. A lower number signals more spending on capacity is needed.

Moreover, despite reserve margins declining, and weak electricity demand, NERC argues that "none of the Assessment Areas' Reserve Margins fall below Reference Margin levels in the short-term horizon" in the period between 2016 and 2021.

All told, there is no immediate pressure on utilities to ramp up spending, but since reserve margins are falling, spending is likely to increase in the medium term. The fly in the ointment could come from an economic slowdown acting to reduce electricity demand, which, as NERC outlines above, is declining in growth.

Low gas prices to the rescue
If gas prices remain low, then gas turbines are likely to be run more -- a boon to services demand for companies with large installed bases such as General Electric and Siemens. Moreover, retirements of plants using competing energy sources (such as coal) could accelerate due to the relatively more attractive price of gas coupled with government regulation against coal.

Is it safe to assume, as some well-respected observers think, that lower gas prices are a net benefit to the gas turbine demand?

Not so fast. The reality is that a lot of the growth in electricity spending is coming from emerging market countries, some of which are reliant on high energy prices in order to support government spending on utilities. Moreover, electric capacity expansion is often tied to oil and gas projects, which may be curtailed because of low energy prices.

As you can see below, a significant part of General Electric's 2015 power revenue comes from the Middle East and Africa. 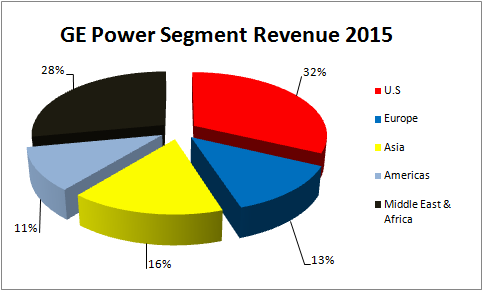 General Electric Company is well positioned
Siemens' management believes the turbine market is very competitive, with overcapacity in the large turbine market. In such conditions, it's usually a good idea for large players to consolidate the industry (as in Siemens' acquisition of Dresser-Rand) or develop game-changing technologies.

Here's what General Electric has been doing:

In short, management should be lauded for its strategic moves in an otherwise moderately growing market.

The bottom line
The power spending outlook is moderately positive, but cyclical risk remains. Lower gas prices offer an opportunity, but they are also creating a threat to revenue generation. It all sounds inconclusive, but what isn't in doubt is management's maneuvering to generate growth in power.

General Electric's purchase of Alstom's energy assets increasingly looks like a good move, and the company's IIoT initiatives and focus on services growth is ensuring the company can outperform a moderately growing power market.