Please ensure Javascript is enabled for purposes of website accessibility
Log In Help Join The Motley Fool
Free Article Join Over 1 Million Premium Members And Get More In-Depth Stock Guidance and Research
By Ashraf Eassa - Apr 19, 2016 at 8:30AM

It's a solid improvement, but maybe not as big as the chip guru's process technology experts claim.

A good deal of the presentation was spent discussing the chip area and, ultimately, cost-per-transistor reductions that this new technology enabled. This is what Intel seems to like to talk about quite a lot these days, but in Bohr's presentation was also information around the improvements in performance-per-watt that the new 14-nanometer technology brought.

Per Bohr, for server, laptop, and mobile applications, the 14-nanometer process technology is expected to bring a roughly 1.6-times improvement in performance-per-watt over the prior generation. 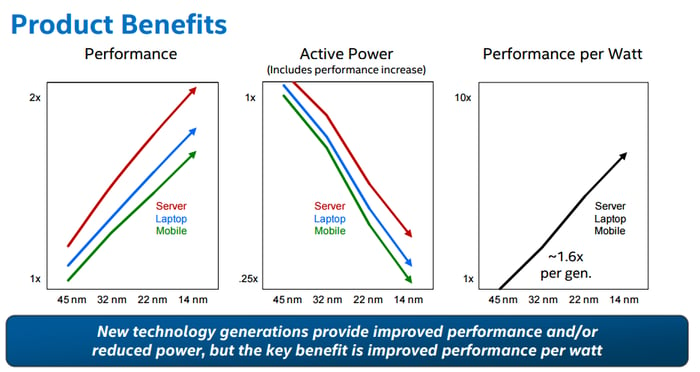 22-core Broadwell-EP versus 18 core Haswell-EP
The most powerful server processor that Intel built on its 22-nanometer chip manufacturing technology featured 18 of the company's Haswell CPU cores. The chip ran at a base frequency of 2.3 gigahertz, with maximum turbo (likely on a single core) of 3.6 gigahertz. Intel rated the chip at a 145 watt thermal design power.

Late last month, Intel released the successor to Haswell-EP known as Broadwell-EP. This chip is built on the company's 14-nanometer manufacturing technology and uses slightly improved versions of the Haswell CPU core. Broadwell-EP also scales up to a greater number of CPU cores than Haswell-EP does.

If we assume equivalent power consumption for the two chips, then the 22-core 14-nanometer Broadwell part should be along the lines of 23.3% faster than the 18-core 22-nanometer Haswell-EP chip.

There is a clear improvement in performance-per-watt, but it looks to be more on the order of 23.3% rather than the approximately 60% generation-per-generation improvement that Intel claims for each new chip manufacturing technology.

Where does the 1.6x improvement come from?
Although real-world power consumption numbers could paint Intel's 14-nanometer in a more favorable light than the "paper" comparison done here, it's likely that the "real world" performance-per-watt increase attributable to 14-nanometer in fairly high performance server processors is closer to ~1.23x rather than the quoted 1.6x.

What's also interesting is that in Intel's paper describing its 14-nanometer process technology, the company claims that saturated drive currents increase by 15% and 41% for NMOS and PMOS transistors, respectively, over the prior generation 22-nanometer technology at the same voltage/leakage.

Perhaps transistor performance, rather than transistor density, should be the focus of Intel's next investor-targeted presentation on process technology?