Please ensure Javascript is enabled for purposes of website accessibility
Log In Help Join The Motley Fool
Free Article Join Over 1 Million Premium Members And Get More In-Depth Stock Guidance and Research
By George Budwell, Neha Chamaria, and Steve Symington - Apr 22, 2016 at 9:39AM

Our Foolish contributors think the market's wild ways have transformed these three stocks into compelling bargains.

Stocks have been on a wild ride so far this year, because of the confluence of falling oil prices and the ongoing U.S. presidential election. Our Foolish contributors, though, think that this volatility has created some compelling buying opportunities for patient investors. Read on to find out which three stocks they're buying again, and why they're doing so.

Neha Chamaria: This will probably be a tough year for Potash Corporation of Saskatchewan (POT), as demand for fertilizers continues to exceed supply, but much of the pessimism appears to be baked into the stock price. Having lost half its value in the past year, PotashCorp is currently trading close to its 52-week lows and commanding historically low valuations. 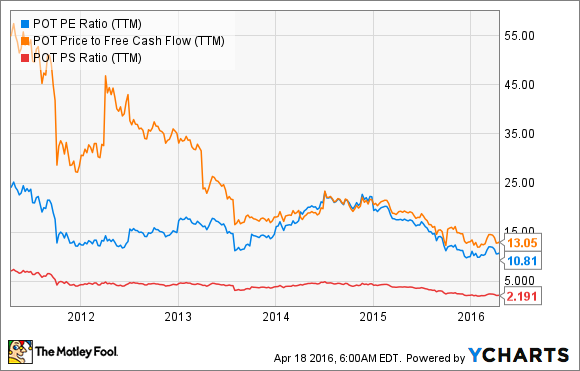 That looks like a compelling opportunity to get into a company that manufactures fertilizers that help improve crop productivity -- an urgent need in this hour of erratic climate changes, shrinking arable land, and a growing population.

According to the latest industry updates, India -- a key market for potash -- will probably call off its potash import holiday earlier than planned and negotiate contracts in a few weeks' time. Meanwhile, prices of key crop corn have climbed steadily in recent months in anticipation of lower yields from Brazil, and projections for the U.S. corn acreage have bumped up, too. That's encouraging for PotashCorp, because corn requires large amounts of fertilizers, and higher crop prices boost farmers' income and demand for nutrients.

It also helps that PotashCorp is striving hard to boost margins while it awaits the end markets to turn around. For instance, it is aggressively ramping up its lowest-cost plant at Rocanville to bring down its cost of production substantially in the near future.

Long story short, PotashCorp may grow slowly, but I don't see much downside in its earnings in the years to come. At barely 10 times trailing earnings and a dividend yield that tops 5%, I'm willing to stomach some of the volatility and bet on the stock today for greater long-term returns.

George Budwell: I'm currently buying shares of Allergan (AGN), again, for a couple of reasons. First off, Allergan's stock absolutely crumbled after its planned merger with Pfizer went south earlier this month. And while such a dramatic downturn may normally be cause for concern, I think it represents an amazing opportunity to buy a quality company at a substantial discount. In fact, Allergan's shares are currently trading near their 52-week lows and are down by over 35% from their former highs, according to data provided by S&P Global Market Intelligence: 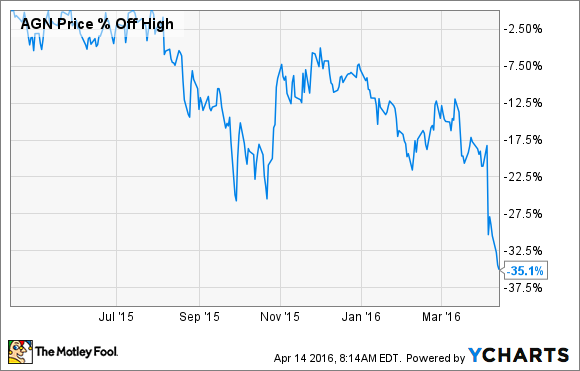 Besides its far lower share price compared with just a few months ago, I think Allergan's diverse branded pharma portfolio, which sports medical aesthetics products such as Botox, the chronic-dry-eye drug Restasis, and the Alzheimer's disease treatment Namenda XR, is worth a deeper dive by value investors. All three of these products posted double-digit annual sales growth last year, helping to drive Allergan's total revenues up by 10% on a pro forma basis in 2015. And with multiple commercial launches for newer products such as the double-chin treatment Kybella and the novel antibiotic Dalvance under way, Allergan looks, to me, like it offers considerable deep value for patient shareholders as well.

Allergan's shares were performing admirably before this merger with Pfizer was even announced -- primarily because of its top-flight product portfolio and compelling long-term growth profile. That's why I think the market will eventually forget about this botched merger with Pfizer and remember that Allergan remains a solid stand alone investing vehicle. .

Steve Symington: When I bought my first shares of Whole Foods Market (WFM) almost exactly three years ago, I wrote at the time that I intended to hold the stock in my personal portfolio for at least a decade. And even with shares down around 40% from their 52-week-high -- and roughly 30% below my original cost basis -- my resolve to continue buying and holding Whole Foods stock hasn't changed. In fact, I think now is a great time for investors to open or add to their positions in Whole Foods.

That's not to say the organic grocer's business isn't facing some legitimate concerns. Competition for its lucrative niche has continued to intensify as both smaller organic grocers and entrenched traditional competitors expand their presence, which means Whole Foods has had to focus more on value-oriented items and, in turn, take a hit on margins. But Whole Foods also unveiled a nine-point plan this past November to differentiate itself, including notable near-term goals of improving its cost structure, technology and strategic marketing investments, building consumers' perception of Whole Foods' value proposition and brand differentiation, and next month's launch of its first store featuring the new smaller footprint 365 concept, which holds promise to drive growth with modern designs, innovative technology, and carefully curated product mixes.

That's not mention Whole Foods sees the potential to nearly triple its U.S. store base to 1,200 locations over the long term, and that number could increase further depending on the success of the 365 concept. So even in the face of stiff competition and less lucrative margins than we've seen in the past, Whole Foods should still be able to drive shareholder value by combining that sheer growth potential with its renewed focus on operational efficiency.