Please ensure Javascript is enabled for purposes of website accessibility
Log In Help Join The Motley Fool
Free Article Join Over 1 Million Premium Members And Get More In-Depth Stock Guidance and Research
By Sean Williams - Apr 23, 2016 at 11:41AM

These two fast-casual chains tied for first in this review of customer loyalty at 21 eateries, survey shows.

It's pretty safe to say that the restaurant business in the United States is about as healthy as it's ever been. According to a Bloomberg report, March 2015 marked the first time since data began being collected by the U.S. Commerce Department in 1992 that Americans spent more eating out at bars and restaurants than on purchasing groceries in stores and supermarkets.

The importance of brand loyalty
These figures imply a substantial opportunity for investors, but only if they invest in companies that have the ability to keep consumers happy and loyal to their brand. Unfortunately, deciphering which restaurant brands are top among consumers isn't cut-and-dried. For that, we'll turn to New York-based research firm Brand Keys and its 2016 Customer Loyalty Engagement Index (CLEI).

Perhaps even more important, loyal customers are more than happy to tell their friends and family about good (or bad) experiences. Word-of-mouth advertising is completely free to businesses, and it often can have a far greater impact than any national digital or print campaign. Chances are you're more likely to try a restaurant if a friend or family member said they liked it than simply because of an advertisement you heard on the TV or radio.

Restaurants that can build large, loyal customer bases can typically use that popularity to grow their business and their profits, which is great news for investors. That's why Brand Keys interviewed nearly 43,000 consumers across the U.S. to understand how businesses are engaging with them to earn their loyalty. The result? After reviewing 21 fast-casual restaurants, two tied for the top spot. But before we get into discussing these top-tier fast-casual restaurants, let's have a look at three surprises in the rankings.

Three big surprises in these fast-casual restaurant loyalty rankings
Hands down, the biggest jaw-dropper in this year's rankings is Darden Restaurants' (DRI -1.98%) Olive Garden, which ranked 14th of 16 in last year's rankings and came in as No. 5 of the 21 listed fast-casual restaurants in 2016. After investor activists took control of Darden's board, we're seeing a more streamlined kitchen, an increase in higher-margin alcohol sales, and consumer satisfaction with its trademark breadsticks on the rise. The difference has been night and day, with Olive Garden delivering positive same-restaurant sales comps in six straight quarters. 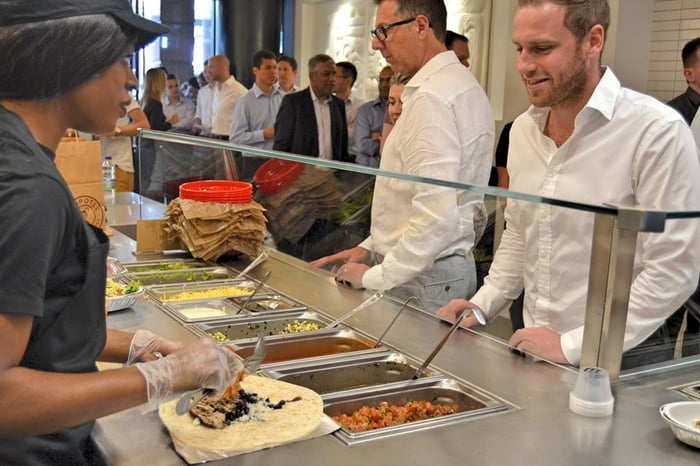 Another major surprise (or perhaps not-so-major if you've been following the news) is Chipotle Mexican Grill's (CMG -2.01%) tumble from the top spot in Brand Keys' 2015 CLEI rankings. Multiple recent instances of E. coli and norovirus across the United States have stymied sales at the fresh-Mex restaurant chain, causing Chipotle to reduce the reliance on local produce providers that had separated it from other fast-casual dining chains, and instead turn toward central preparation of some of its vegetables and ingredients to minimize the chances that another food-based health scare occurs. The good news here is Chipotle has plenty of time to right the ship, but this didn't prevent the company from dipping below Olive Garden in this year's loyalty rankings, or 6th overall.

Lastly, DineEquity (DIN -3.09%) had a pretty poor showing with both IHOP and Applebee's dropping substantially from last year's rankings of 7th and 8th, respectively. This year, IHOP finished just outside the bottom third (13th overall), while Applebee's (18th) finished ahead of only Outback Steakhouse, TGI Friday's (last year's bottom-feeder), and Cosi, in that order.  Applebee's has been a particular sore point as its menu features hamburger and steak items, both of which have been rising in cost. Catering to a middle-class audience, Applebee's menu has simply been unable to offer much excitement, but at the same time that hasn't stopped it from passing along higher costs to the consumer.

America's favorite fast-casual restaurant is...a tie!
On the other end of the spectrum, Brand Keys' survey showed a tie for the top spot. The winning fast-casual restaurants? None other than Panera Bread (PNRA), which came in second in 2015 and was No. 1 in 2014, and new entrant to the rankings, Shake Shack (SHAK -4.78%).

For Panera Bread it was business as usual. The same aspects that have made Panera popular with consumers in the past continue to drive new and returning customers into its restaurants.

To begin with, Panera believes in offering smaller portions for its meals, catering to a more health-conscious audience. We've also seen Panera speed up its service by installing drive-thrus in certain locations. As icing on the cake, Panera has also pledged to remove more than 150 artificial ingredient from its menu by the end of 2016. What we have is a company pledging to use fresh ingredients, serving well-thought-out proportions, and delivering to the consumer in a reasonable time frame. In other words, it's the perfect restaurant chain to cater to on-the-go millennials. As long as Panera sticks to its game plan, it should command strong customer loyalty.

On the other hand, Shake Shack sells hamburgers and fries, which is a bit of a contrast from Panera Bread. Nonetheless, its efforts to drive customer loyalty aren't going unnoticed.

For example, Shake Shack invests a lot of time and money into its restaurants and staff. Company founder Danny Meyer has a background in fine dining, meaning he brings a more upscale feel to a restaurant segment that traditionally feels inexpensive. Shake Shack also pays far above the minimum wage to employees and provides stock options to its managers and full-time staff in order to keep happiness and satisfaction up. A happier workforce is more likely to provide the customer with a positive experience.

Shake Shack also puts its ear to the ground and listens to its customers. In 2013, the company began offering fresh, hand-cut fries, abandoning its frozen but iconic fries with crinkles. Shake Shack thought consumers would prefer fresher fries, but customers complained and preferred the frozen fries with crinkles. The company relented and brought back its iconic fries.

Based on the strong customer loyalty shown to Panera Bread and Shake Shack, as well as their double-digit percentage annual EPS growth opportunity, these could be two companies for investors to consider adding to their investment portfolios.