If they don't cut it out soon, this good news could be habit-forming. 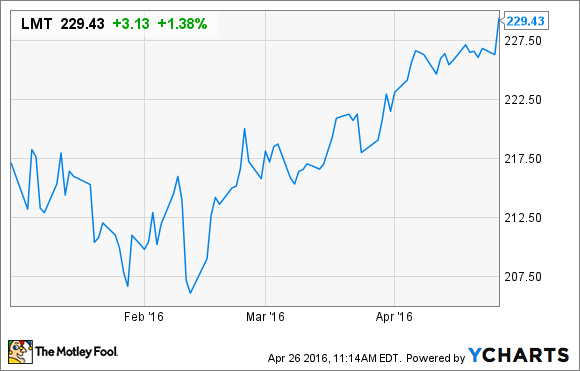 Lockheed Martin stock is having a very good year. LMT data by YCharts.

Across the stock markets, indices are bleeding red this morning. But over at Lockheed Martin, the stock is up more than 2%, and for good reason: Lockheed Martin just topped analyst estimates again.

What the news means
What does all of this mean to investors in Lockheed Martin stock? Well, the very high-level story is this: Profit margins are down significantly, but this was to be expected.

Profit margins are down because when Lockheed Martin bought Sikorsky from United Technologies (RTX 0.61%) for $9 billion last year, it gained a large stream of new revenues that earned very low profit margins. The influx of low-margin revenues diluted Lockheed Martin's own stream of high-margin revenues, lowering the company's overall profitability.

(Hint: That's the opposite of ramping sales, guys).

Valuation
But it wasn't all bad news for Lockheed Martin -- far from it. Cash from operations at the company surged 63% in Q1 compared to Q1 2015. Rising capital expenditures hardly put a dent in the flow of new money, and free cash flow for the quarter rose to $1.4 billion. That was a 68% improvement, and it stands in marked contrast to the apparent decline in GAAP "earnings."