Please ensure Javascript is enabled for purposes of website accessibility
Log In Help Join The Motley Fool
Free Article Join Over 1 Million Premium Members And Get More In-Depth Stock Guidance and Research
By Rich Smith - May 2, 2016 at 1:13PM

It may not be the wrong call, but it sure is weird timing. 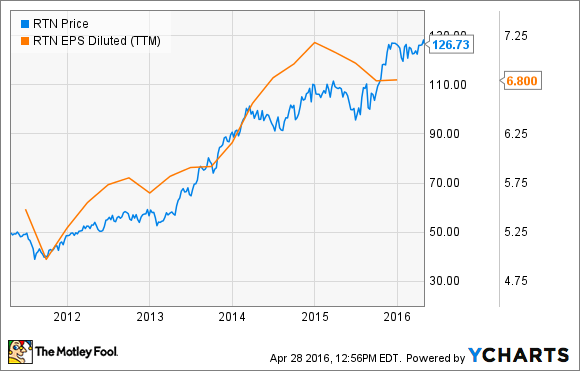 Raytheon's stock keeps rising, but did it maybe just get a little bit ahead of itself? RTN data by YCharts.

How did that happen?

The news
Before addressing that question, let's get specific. Here's how the Q1 numbers played out in detail:

With both revenue and earnings coming in ahead of estimates, Raytheon now believes it will earn more this year than previously thought possible -- anywhere from $6.93 to $7.13 per share. With consensus estimates hovering around $7.03 per share, however, this is no more than analysts were already expecting. And that probably explains why news of twin revenue-and-earnings beats has failed to lift Raytheon's stock price.

But it still doesn't explain why the stock price actually fell.

Valuation matters
Currently, Raytheon shares sell for 19.3 times trailing-12-month earnings. Even factoring a 2.3% dividend yield into the picture, that's a princely sum to pay for a stock that analysts, on average, expect to grow at barely 8% annually during the next five years. Simply put, it's my considered opinion that Raytheon shares were overvalued before earnings -- sufficiently so that even a better-than-expected earnings report wasn't enough to keep the stock moving up.

Still, the timing of investors realizing this does seem strange. Raytheon shares were already overvalued before earnings came out. I also think they're a bit less overvalued today. Here's why:

Yesterday, I told you that the one number I'd be focusing most intently on in Raytheon's earnings report was its free cash flow -- its cash profits, calculated by subtracting capital expenditures from operating cash flow. Historically, Raytheon's been a pretty weak cash producer. But this morning, that began to change.

You have to dig pretty deep within Raytheon's earnings report to find this, but it turns out that Raytheon roughly sextupled the amount of cash generated from operations last quarter, from $55 million in Q1 2015 to $325 million in Q1 2016. Capital spending also increased, but "only" three times. When all's said and done, Raytheon came out of the quarter producing positive free cash flow of $175 million. According to S&P Global Market Intelligence data, that was enough to lift Raytheon's trailing-12-month FCF number past $2.1 billion, and past its $1.95 billion reported "net income."

Suffice it to say, this is a positive development for Raytheon shareholders. It's been more than two years since Raytheon last generated free cash flow superior to reported net income. And now that it's done it, the company's price-to-free cash flow ratio has fallen below its P/E ratio, to just 17.9.

Is that price cheap? I'd have to say no. Is it cheap enough to convince me to rush out and buy more Raytheon stock for myself? Also no.

But it's a cheaper price than what Raytheon cost just last Wednesday. And that's anything but a reason to sell Raytheon now.