After what seemed like an eternity (although it was really "just" 17 months), oilfield services company Halliburton (NYSE: HAL) has officially killed its bid to acquire smaller rival Baker Hughes (NYSE: BHI). It's an outcome that nobody, except the regulators, was hoping for. Here's a rundown of the winners and losers, which surprisingly includes General Electric (NYSE: GE).

The biggest loser
Halliburton, of course, had the most to lose if the deal fell through. The company was hoping to realize cost synergies and to increase its market share in the U.S. and overseas. Through doing so, it could have improved its pricing power and rivaled current industry heavyweight Schlumberger (NYSE: SLB) in annual revenue.

Of course, these were the things that U.S. regulators absolutely did not want to occur. They were concerned about the lack of competition in the U.S. market that would result in certain areas if Halliburton and Baker Hughes were allowed to join forces. As a result, Halliburton proposed billions of dollars in asset sales and divestitures to satisfy the regulators. But the regulators weren't impressed, reportedly urging Halliburton to sell even more.

Adding insult to injury, Halliburton will now have to pay Baker Hughes a breakup fee of $3.5 billion in cash. As of the end of its most recent quarter, Halliburton had $9.6 billion in cash on its balance sheet, which means at least it won't have to finance the fee through debt. But that's about the only silver lining for the company.

Money can't buy success
Another big loser in all this is Baker Hughes. That may sound surprising -- didn't I just say that Baker Hughes was getting a massive breakup fee from Halliburton? Yes, but that short-term infusion of cash doesn't do much to change Baker Hughes' overall situation, which isn't good.

Baker Hughes is a distant third in the oilfield services market, and as a result it has far less pricing power than its larger rivals, as evidenced by its profit margin and return on equity, which have been been lower than the others' for nearly a decade. . Not to mention, the company's fortunes have been in decline along with the collapse of oil prices. Its stock has dropped 35% over the past year, nearly double Halliburton's or Schlumberger's losses: 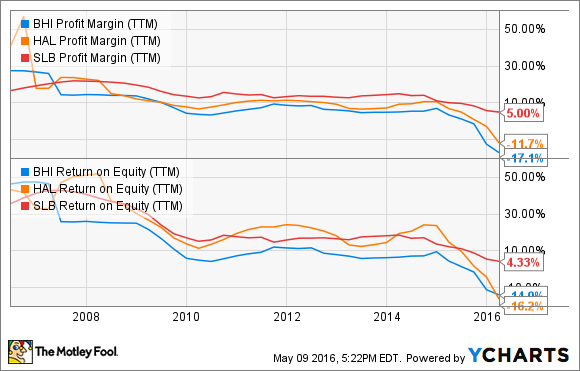 Getting together with Halliburton wouldn't have altered the industry fundamentals that are weighing on all three companies, of course. But Baker Hughes is now left in the unenviable distant-third position it was in before.

The indirect effect
The collapse of the deal also has an impact on an unlikely player: General Electric. Along with its many other businesses, such as jet engines and light bulbs, GE has a large energy business. And while oil prices have been hitting that business hard over the past year, CEO Jeff Immelt is looking to expand it.

Specifically, Immelt was considering purchasing Halliburton's drilling unit. The advantages for GE were obvious enough: GE manufactures big, complicated pieces of machinery, and oil and gas drills certainly fit that bill. Even better for GE, with the overall industry in such turmoil, it was likely to be one of only a few -- at most -- prospective buyers. This, coupled with Halliburton's urgent need to sell off portions of its business to appease regulators, should have resulted in a very favorable price for GE.

Alas, now that Halliburton has no need to sell, it's probably not going to let go of its drilling unit, and certainly not at a bargain price. Immelt will have to look elsewhere for opportunities to add value to his own energy unit.

Winning the losers' game
Perhaps the only company to come out ahead in all this is Schlumberger, although you could argue that all of these companies' customers win by avoiding potential pricing increases that could have resulted from the deal. Schlumberger's status as the undisputed largest oilfield services company in the world will almost certainly remain unchallenged. And what company wouldn't breathe a sigh of relief when a potential major competitor vanishes in a puff of regulatory smoke?

Of course, the term "winner" here is somewhat ironic: The failure of this deal simply preserves the industry's status quo. And it's a status quo of unprecedented price declines, bankrupt customers, and falling stock prices. In short, it's not a safe place for investors' money right now.