Please ensure Javascript is enabled for purposes of website accessibility
Log In Help Join The Motley Fool
Free Article Join Over 1 Million Premium Members And Get More In-Depth Stock Guidance and Research
By Rich Smith - May 19, 2016 at 5:09PM

Earnings news, and a big change in management rock the stock. 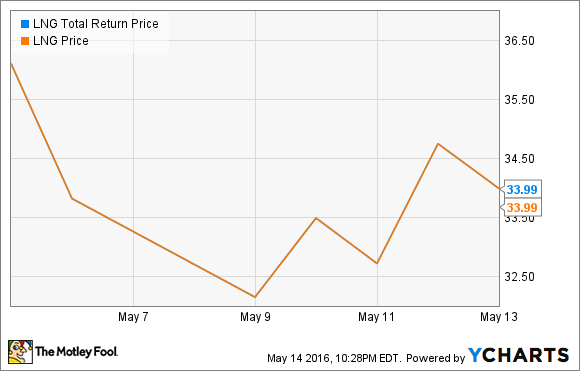 It's been an eventful week and a half for Cheniere Energy (LNG -0.81%), the Houston-based natural gas company that's trying to build a business exporting American liquefied natural gas to the world. Let's run down the events as they happened and see if we can make sense of how Mr. Market is reacting to them.

We'll begin with earnings. On Thursday, May 5, Cheniere announced its fiscal first-quarter 2016 earnings results -- or rather, its fiscal Q1 "loss results." Cheniere, which according to data from S&P Global Market Intelligence hasn't earned a single full-year profit in any of its past 20-odd years as a public company, held true to form in Q1 2016, reporting $1.41 per share in losses over the past three months. That was 19% more money than it lost in the year-ago quarter -- and you can see how investors reacted to this news in the preceding chart.

Cheniere has finally begun exporting LNG to the global market, but is still ramping up operations. As management reported, it exported a total of four "LNG commissioning cargoes" in Q1, and had exported a further three in the month since Q1 officially ended (seven total). This implies a run-rate of approximately nine cargoes per quarter going out at present, more than twice as many as left port last quarter.

In management's opinion, this increase in the pace of LNG exports marked the company's "transition from a development company into an operating one." In further demonstration of the transition, Cheniere is proceeding with plans to activate a second "train" for liquefying gas for transport. From that point on, export activity should only accelerate. Management has outlined plans to open at least 11 separate trains eventually, and has made equity investments in another two.

Unfortunately for investors looking for a sign that Cheniere will turn profitable in the near future, continuing to build out the company's infrastructure comes at a cost -- in this case, operating costs 24% higher than Cheniere incurred in Q1 2015. Revenues to offset those operating costs, on the other hand, are still a ways off. They will not begin flowing in significant quantity until the company's Cheniere Energy Partners subsidiary, which owns most of the company's assets, begins generating significant profits. Cheniere Energy Partners was profitable last quarter, but earned only $0.02 per share..

Cheniere's next major development came seven days after earnings -- and again, you can see the market's reaction to it in the preceding chart. On the morning of May 12, Cheniere announced that interim CEO Neal Shear has stepped down from his post to be replaced by new hire Jack Fusco, the one-time CEO, and most recently executive chairman, of Calpine Corporation (NYSE: CPN), a wholesale power generation company that is itself a big consumer of natural gas.

After selling off Cheniere Energy stock in response to the earnings news, investors flocked back to the stock on learning of the change in management -- but perhaps they returned too soon.

Cheniere Chairman G. Andrea Botta, you see, hailed Fusco as a man who "has spent over 30 years in the energy industry and has significant experience leading companies with large-scale, asset-intensive portfolios," and that is true. What's also true, however, is that Fusco's term at Calpine wasn't exactly what many investors would describe as a "success."

Navigating the turbulent natural gas market can't have been easy these past eight years, and Fusco deserves credit for keeping his old company (mostly) profitable during his tenure at Calpine. Still, when Fusco took over as CEO of Calpine in August 2008, the company's stock was selling for roughly $18 per share. Nearly eight years later, when he left Calpine, the stock was selling for less than $15 per share -- down 20%. So while Cheniere shareholders may have been looking forward to a change in management, I'm not convinced this is a change they can believe in.

Could I be wrong? Certainly. And there's certainly an argument to be made that Cheniere's transformation from what was essentially a concept in development, to a fully fledged LNG export operation, called for a change in management style. That said, Fusco has just come aboard a tanker loaded not just with LNG, but with $16.6 billion in long-term debt, no profits to pay it with, and $7.7 billion in annual cash burn.

If you ask me, the biggest problem with Cheniere going forward isn't just its new captain. It's the ship itself.