King Digital Entertainment is set to go public with the ticker "KING." The maker of the wildly popular Candy Crush Saga is the latest to take advantage of a hot IPO market; management is seeking an IPO price of up to $24 per share, which translates into a valuation of almost $8 billion. Given the recent track record of the IPO market, shares that become available to the public after trading commences will likely command a premium on top of $24 per share. Investors must determine if this valuation is reasonable.

Competitive landscape
King operates in the highly competitive field of video game development, which is occupied by a wide range of video game developers including Activision Blizzard (NASDAQ: ATVI), Electronic Arts (NASDAQ:EA), Take-Two Interactive (NASDAQ:TTWO), and Zynga (NASDAQ:ZNGA). Below is a quick comparison of these companies to King based on the company's recent SEC filing:

Source: Yahoo! Finance-March 20, 2014
* King valuation and multiples based on share price of $24 and information from Form F-1 filed with the SEC.

To put this in context, the table above projects a valuation for King that is more four times as much as Take-Two. Is this sizable valuation justified?

The bullish argument
Investors eagerly awaiting the King IPO are often looking at two simple concepts. First, King's revenue growth has exploded, from more than 1,000% from just $164 million in revenue in 2012 to $1.88 billion in 2013. Very few businesses can ever produce growth of that magnitude, so credit is due to management for accomplishing such an impressive growth rate.

With this growth and valuation combination, many may wonder whether King's shares will spike much higher after the company makes its debut. It is possible, but before jumping on the bandwagon there are several risks to consider.

Risks to the investment thesis
EA was the preeminent developer 20 years ago, yet the company's stock has sagged in recent years due to profitability struggles. Zynga, a mobile-focused developer that created a similar buzz to the King IPO, fell flat due to its inability to monetize "freemium" games. Take-Two, which has the lowest P/E ratio in the table above, has also struggled to remain profitable, despite having a broad assortment of titles. Several years of losses were reported before 2013's strong earnings. These struggles have translated to weak share performance over the past several years: 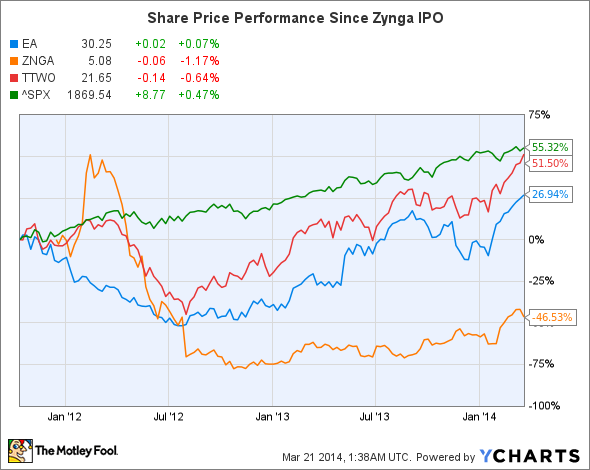 All three companies have failed to beat the market since Zynga's highly anticipated IPO in late 2011.

Video game developers' inconsistent performance should be especially alarming to potential King shareholders. While the company currently has the second, fourth, and sixth top-grossing games on the iOS App Store, the company has only monetized one type of game. These top selling titles, Candy Crush Saga, Farm Heroes Saga, and Pet Rescue Saga, are all variations on the same concept, as are several other King games.

In King's F-1 filing, it notes that 95% of total gross bookings come from these three games. So, until King demonstrates the ability to develop other successful franchises, an investment in the company is a wager that Candy Crush will drive results for the foreseeable future.

There are already signs that point to the beginning of a decline in King's Saga popularity, with App Store downloads of its big three titles dropping to the 10th, 14th, and 41st spots on the charts. Whether it is Flappy Birds or whatever comes next, there hasn't been a great track record of mobile apps staying popular for long.

Best of the video game developers
Rather than speculate on the duration of Candy Crush's popularity, or whether King can develop a second winning concept, it makes more sense to pick a video game developer that already has a long track record of profitability, several franchises that have reached $1 billion in revenue, and a rich pipeline.

This company is Activision Blizzard. Unlike its peers, Activision Blizzard has been consistently profitable and has demonstrated the stability of its business model by regularly returning value to shareholders via dividend and share repurchases. While Activision Blizzard is making a push into mobile in 2014, the company has a stable revenue base from leading console titles like the Call of Duty series as well as subscription revenue from games such as World of Warcraft. Investors also can look forward to a pipeline in 2014 that includes Destiny, a title that management expects to reach $1 billion in revenue.

Even though shares of Activision have almost doubled since I first declared 2013 to be "the year of the Activision breakout," the market still hasn't quite appreciated just how solid and consistent of a business it is. As a result, there remains upside from investing in the best-in-class company in video game development rather than speculating on the flashy newcomer that carries significant risk.