As bread-and-grains-free diets proliferate with greater understanding of how gluten effects the body, the fast-casual restaurant chain could grow a bit moldy.

Grains and bread form the foundation of the government's food pyramid, recommending anywhere from five to 12 servings daily, and Panera Bread (PNRA), whose name drips with redundancy -- panera, after all, is Italian for "bread" -- would heartily agree.

Will bread soon fade to become a grainy image? Greater health consciousness by consumers is working against seeing bread rise.

But with the growth of gluten-free diets that seem to continuously increasing in number, the risk to the fast-casual restaurant's business model would appear to be at risk.

A crusty leader leads the charge
Panera seems to recognize the threat and recently called on bakers "to stand strong on bread." At the annual meeting of the American Association of Cereal Chemists International, the restaurateur said it would be "taking back bread" over the coming year from those who were spreading a bad message about the key food group.

As well it might. Last quarter comparable net bakery-cafe sales at company owned restaurants rose an anemic 0.1% while franchised locations fell 0.2% leading to flat companywide comps. After peaking in 2012, bakery sales have fallen through the floor. 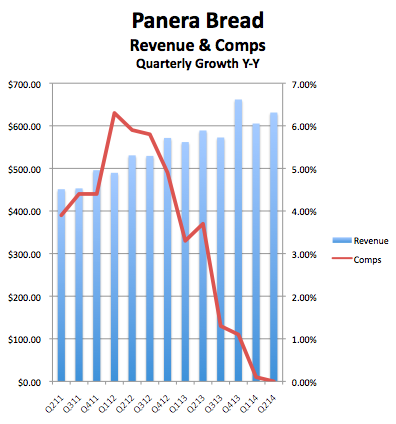 The numbers are actually even worse than what the chart shows because of the 1,818 systemwide restaurants it operates, slightly more than half (51%) are franchised, and comps at those stores have turned negative for the first time. 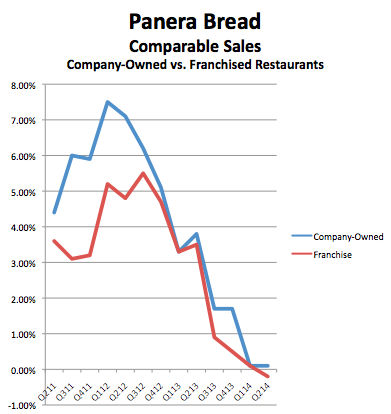 It doesn't matter who's minding the store, seas are only heading in one direction. Data: Panera Bread quarterly SEC filings

It's no surprise the decline has come about at the same time there's been a rise in awareness of celiac disease and of gluten intolerance, topics Panera assiduously avoids in its conference calls with Wall Street analysts.

Fast-casual is hot, Panera Bread is not
It perhaps also explains why other fast-casual chains like Chipotle Mexican Grill (CMG 0.38%) continue to do well while Panera lags. While storewide sales at the bread maker have gone flat after a long downward spiral, the healthier burritos and taco maker are seeing comps soar. 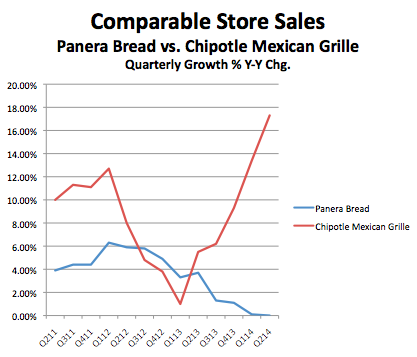 Consider it a contest between breads that rise and those that are flat, but the gulf between the two is growing wider. Data: Company quarterly SEC filings

Gluten is a punch to the gut
Celiac disease is a chronic, inherited, autoimmune digestive disease that damages the small intestine and interferes with absorption of minerals nutrients from food. Brought on by an intolerance to gluten, or a protein that is found in wheat, rye, barley, and sometimes oats, it causes inflammation that can lead to malnourishment as nutrients are prohibited from being absorbed through the intestinal tract into the blood.

It's estimated 2 million people in the U.S. have celiac disease, and according to the National Institutes of Health the only known cure for it is complete avoidance of gluten-containing products.

The market analysts at Datamonitor says some 20% of consumers globally regularly avoid certain foods due to allergies or intolerance and 22% more do it occasionally. Sales of gluten-free foods are expected to hit $5.5 billion by 2015 though Mintel, with a broad definition of what defines "gluten-free," believes it already surpassed $10 billion and could reach $15.6 billion by 2016.

Others, with a narrower field of view, put the opportunity at $4.2 billion back in 2012 but still anticipated massive, double-digit growth rates for the niche.

Indeed, gluten-free bread products are the biggest category (naturally) and are witnessing the biggest surge. Sales of such items grew from $1.43 billion in 2011 to $2.52 billion last year, a 76% increase, outpacing the 58% rise witnessed in the dairy and dairy-alternatives category.

Gluten-free is more than just the diet du jour
From Atkins to paleo and the books Wheat Belly to Grain Brain, diets promoting wheat and grain avoidance are all the rage, but doctors too are increasingly coming to the conclusion grains are a leading cause of what's making us fat. Yet the USDA continues to recommend we eat two to three times more servings of bread than healthier items like fruits and vegetables.

Grain-free meals like this paleo diet offering eschew the USDA's recommended dietary intake and opt instead to bulk up on various proteins and carbs realized from fruits and vegetables. Photo: Flickr user Katherine Lim

Panera Bread, as a result, is facing a difficult task then, even if it is trying to rally the troops around the cause of "taking back bread," though it does given a nod to those avoiding grains by offering what many refer to as its "secret" or "hidden" menu, a selection of grain-free soups and salads (so long as you hold the croutons).

To counteract the larger threat to its business, Panera says bakers need to target what it calls "engaged food influencers," or EFI's, who are women aged 25 to 44 who, while representing just 18% of the company's traffic, account for 40% of its revenue.

Targeting its strengths
The trade site Bakery and Snacks reports Panera told the bakers at AAACCI's meeting that nearly three-quarters of EFI's didn't realize the fast-casual chain baked its own bread on premises so it plans to be baking throughout the day now.

Because EFI's also tend to view the food group as a valuable part of a healthy diet, there was no need to be apologetic about bread being central to its mission, though it needed to show it was a quality product in which one could indulge.

Inspiring words, perhaps, for an industry that's been under the gun, but as more is learned about the effects of gluten on the gut and the overall health of the individual, it can only mean that Panera Bread will face an ever higher wall of worry that it will become even more difficult to surmount.

Why Investors Should Be Cheering This Record-Setting Restaurant Buyout
401%