After falling by 10%, the Nasdaq seems to be warning of more pain ahead

It's been a miserable month for the markets.

Since the start of September, all three of America's major market indices are down by more than 5%, and most of that drop has kicked in since the beginning of October. The Nasdaq Composite (^IXIC) is in full-on correction territory, as it's edged down by 10% since the start of September. That's not even the worst of it -- the small-cap-focused Russell 2000 (INDEX: ^RUT) is now down a full 10%, and many growth-focused investors are hurting far worse as former highfliers fall off cliff after cliff. 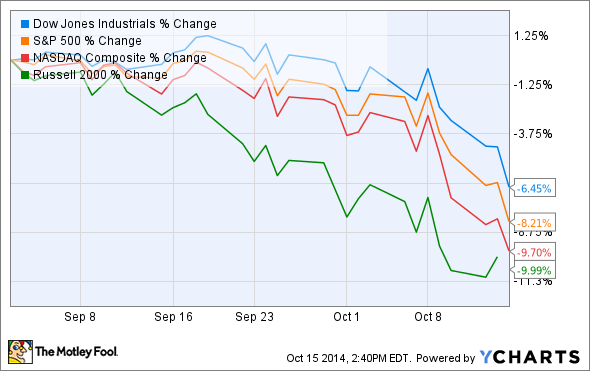 While October's been a middle-of-the-pack month for index returns, it's witnessed some of the worst days (and months) in market history, including the Great Crash of 1929 and the Black Monday crash of 1987. A 22% drop in October of 1987 and a 17% decline in October of 2008 are the S&P 500's two worst monthly performances since 1950.

To market bears, the past two months are incontrovertible evidence of a coming catastrophe. Perma-bear John Hussman began warning this month that the market is likely to fall by half  from its summertime peaks, an apocalyptic scenario that even notorious dotcom-bubble analyst and current Business Insider editor-in-chief Henry Blodget has started to echo this week in an article highlighting the dangers of a market swinging from extreme bullishness toward frantic selling.

Blodget's evidence for a potential stock-pocalypse is compelling, at least on the surface. The market's cyclically adjusted P/E ratio (CAPE) is higher than it's been at any time in history, with the exception of megatops in 1999 and 1929: 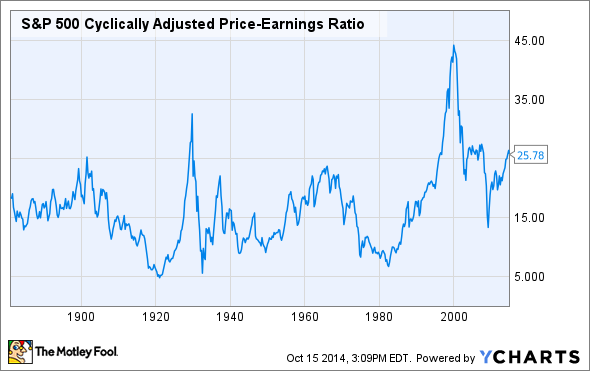 Corporate profit margins are also at all-time highs as a percentage of GDP: 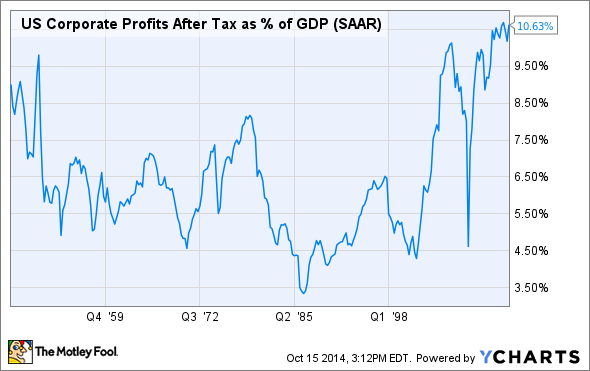 So, is it time to panic? Sure seems like it, right?

Well, calm down. We're not doomed yet.

Debunking the super-bears
Anyone who's been in the market for more than five years is still stinging from the memory of 2008, which still ranks as the second-worst crash in American market history behind the Great Depression. These recent memories make us worried that another megacrash is on the way. But here's the thing -- 50% declines in blue-chip indices are extraordinarily rare in modern times.

Since the Dow Jones Industrial Average (^DJI) was created in 1896, it's only suffered from two bear markets that have destroyed more than 50% of its value: those that began in 1929 and 2007. Add in 40% drops and the number of megabear markets grows to eight, but only one of those 40% declines (the OPEC oil-driven recession of 1973 and 1974) has happened since the end of World War II.

Smaller drops are far more common. Data compiled by market commentator Josh Brown shows us that 27 corrections have shaved 10% or more off the S&P 500's value since the end of World War II. Roughly half of these drops happened in the 1970s or the 2000s, two particularly lousy decades for stocks. Since the market bottomed out in 2009, we've had three 10% corrections, with one in 2010, one in 2011 (this one nearly fell into bear market territory), and one in 2012. Despite these drops, the Dow is still up 145%, and the S&P 500 is up 174%, since the bear market ended in 2009. The Nasdaq and the Russell 2000 have each more than tripled since the 2009 market bottom, even after pricing in the "crash" of the past two months: 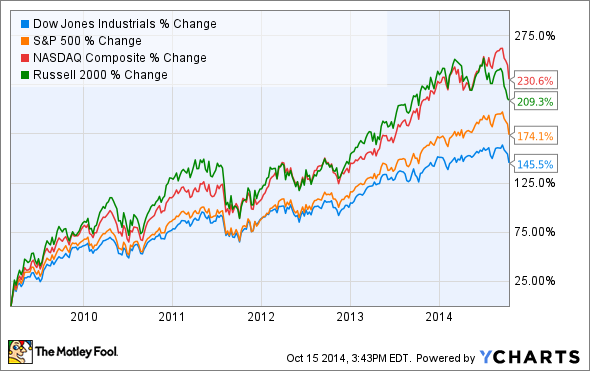 The two large-cap indices haven't even lost 10% yet, and these 5%-plus drops are so common that they've hit the Dow on average every month and a half since the start of the 20th century. If the Dow and S&P continue to fall beyond losses of 10%, they'll have merely endured their fourth corrections of the past five and a half years.

Corrections are common. Could we still be heading into a catastrophe? Let's dig into the details on Blodget's and Hussman's claims that the market is historically overvalued, to see just how relevant this long-term historical view is to the present day.

The market's CAPE is overvalued by historical norms. That much is indisputable. But when we stretch our viewpoint out across nearly 150 years of market history, we wind up assessing our current situation based on scenarios that will never happen again. The market hasn't had single-digit CAPE ratios since the early 1980s in part because there are so many more investors than there ever have been before. For example, the market is extremely overvalued compared to, say, the 1960s, but only 15% of Americans owned any stocks in the 1960s, compared to more than half of the populace today.

I've written on the modernization of American markets before, and I peg the dawn of the "modern" market at 1974, when individual retirement accounts were first created by law. Before its modernizations, the market's average CAPE was 15.2. Since 1974 the market's CAPE has averaged 19.8, thanks to millions of ordinary Americans pouring trillions of dollars into their retirement funds -- and since the start of the great bull market of the 1980s and 1990s, the market's CAPE has averaged 22.3, a mere 14% lower than its current CAPE ratio of 25.8.

As far as corporate profits go, they are at all-time highs compared to GDP only when you discount the impact of overseas profits. After World War II, the American industrial machine produced corporate profits equal to roughly 8% of GDP. Nearly all of these profits were from domestic sources. Today, roughly a quarter of all profit earned by American corporations comes from overseas sales, and when we start accounting for the fact that American businesses are increasingly global in nature, we find that their domestically sourced profits are actually... about 8% of GDP, the same as it was in the late 1940s. Granted, this figure has more than doubled since the 1980s, but it's still not "historically" high when we discount foreign earnings.

There are risks, of course. China's economy could stagnate. Europe has never really recovered from 2008, and recent data doesn't paint a particularly rosy picture. America's economy could run out of steam after more than five years of growth that's been driven in large part by efficiency gains at its largest companies. Even if stocks don't fall by half, we could be looking at years of subpar returns from here on out, a risk Fool analyst Robert Brokamp highlighted last month. Investors shouldn't shrug off recent market volatility and ignore the warning signs now flashing, but you should be more prepared for the possibility of a 20% decline and a year of weakness than a 50% drop and a catastrophic lost decade. The former is relatively common on long-term investing horizons. The latter tends to hit investors only once in a generation.