Many retirees count on Social Security to help cover their living expenses. But helpful as those benefits tend to be, they're generally not enough to sustain seniors without additional income. That's why it's critical to establish a nest egg during your working years -- so you'll have savings to withdraw from once you're no longer actively generating an income.

A nest egg is a sum of money being saved so that it can be used in the future. Typically, when we use the term "nest egg," we're referring a retirement account. By putting money aside during your working years, and establishing a strong investment portfolio with that money, you'll help ensure that you have enough income to support yourself financially once you're no longer working. 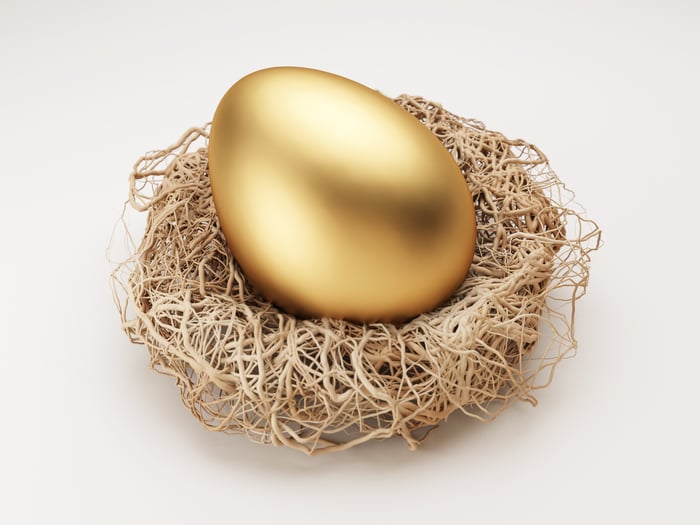 Origin of the term

You'll often hear financial advisors or writers talk about retirement nest eggs, which is really just a way of referring to whatever funds a person has set aside for his or her golden years. The term "nest egg" itself is said to be derived from the practice of farmers putting eggs into hens' nests to induce them to lay more eggs. When you put money into a retirement account and invest it, that money will grow into an even greater sum over time -- just like giving a hen an egg might prompt her to produce even more eggs, thus perpetuating a fruitful cycle.

There's no one-size-fits-all approach for establishing a nest egg. Some folks, for example, will say you need a $1 million nest egg to retire comfortably, but that definitely doesn't apply to everyone. Some retirees can get by on much less, while others may actually need more.

But what you should know about building your nest egg is that the sooner you start putting money away, the more you stand to accumulate, and it's all thanks to a concept known as compounding. Compounding is the notion of earning interest on interest, and it's what allows you to turn a series of relatively small contributions into a much larger sum over time. That's because as you add money to your nest egg and invest it, your returns will get added to your account balance, and you'll then be free to keep reinvesting them to generate even more earnings.

Here's an illustration. Say you begin saving $300 a month for retirement at age 25, and continue to do so for a total of 40 years. Let's also assume you invest heavily in stocks, and therefore generate an average annual 7% return, which is a few points below the market's average. By the time you reach 65, you'll have contributed a total of $144,000 of your own money to your nest egg. But thanks to all that investment growth, what you'll actually wind up with by age 65 is a rather impressive $719,000. That's why it pays to start building your nest egg as early on in your career as possible.

Where to house your nest egg

Though you have several options for where to actually keep the money you're putting aside for the future, your best bet is to use a tax-advantaged retirement account like a traditional IRA or 401(k). Both accounts offer an immediate benefit in the form of tax-free contributions, and just as importantly, they allow your money to grow on a tax-deferred basis over time. This means that as your investments generate income, you won't pay taxes on your gains until the time comes to take withdrawals in retirement.

There's also the option to put your money into a Roth IRA or 401(k). Doing so won't give you an up-front tax break, but your money will get to grow completely tax-free, and you won't pay taxes on the withdrawals you take down the line.

No matter where you choose to house your nest egg, the key is to work on saving as much as possible, as early as possible, to give your money the most opportunity to grow. Having a strong nest egg is the best way to ensure a comfortable retirement lifestyle, so the sooner you begin funding that account, the more financially secure you'll be when you're older.