Many parents worry about the day when they'll need to sit down with their children for the infamous "birds and the bees" talk. But here's another topic to discuss with your kids that's just as critical and possibly less awkward: money. In fact, today's baby boomers (roughly ages 52 to 70 years old) agree that talking finances is even more important than rehashing the science of human reproduction.

According to a recent study by Chase, boomers feel that being open about money and teaching kids smart financial habits should trump all other parent-child discussions. This attitude, in fact, has given millennials a better grasp on the importance of budgeting and saving for retirement. And that's a step in a very positive direction. 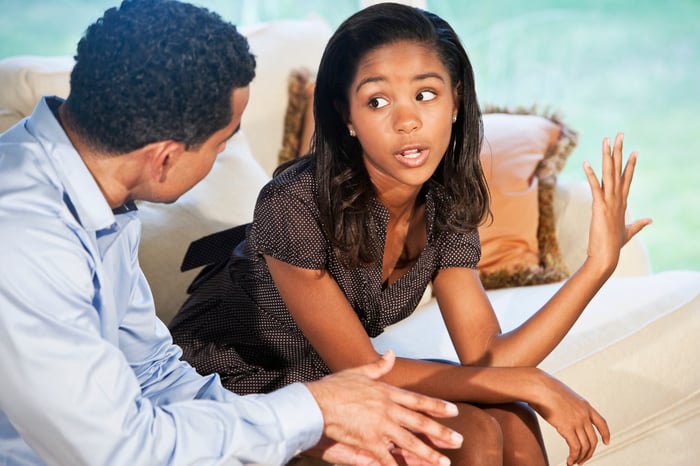 Being open about finances

It used to be the case that talking money was a major no-no, even among family. But that attitude has shifted over time, as evidenced by the fact that millennials are twice as likely as boomers to have discussed financial matters with their parents. An estimated 74% of millennials say they regularly talked about money with their parents growing up, whereas only 34% of boomers and 56% of Gen Xers could say the same. Not only that but 54% of millennials were aware of what their parents earned, versus just 20% of boomers and 36% of Gen Xers.

It's not surprising, then, that millennials today are generally more open about discussing their finances than boomers. Almost 80% of millennials are willing to talk money with friends, as opposed to just 50% of boomers. And millennials are also far more likely to trust financial advisors than their older counterparts.

What your kids need to know about money

Being open with your children about money is a great way to set them on a solid financial path. No matter how old your children are, it's never too early to start teaching them some valuable lessons, like the importance of budgeting and saving for retirement.

The latter is especially important given that pension plans have all but disappeared in the workplace, leaving most Americans to take retirement savings into their own hands. Unfortunately, many of us are already falling behind. An estimated 33% of Americans have failed to save a penny for retirement, but even scarier is the fact that 30% of those 55 and over are in the same boat. In fact, millennials are actually doing a better job of saving for retirement than baby boomers. Furthermore, 67% of millennials claim they stick to a budget, while only 55% of boomers say the same.

The danger of not keeping a budget is failing to grasp where your money goes -- and if you don't know how much you're spending, you're less likely to manage to save. If you currently have a household budget, don't shy away from sharing it with your children. It'll teach them to distinguish between needs and wants at an early age while highlighting the importance of always being money-aware. It also pays to be open with your children about your finances to keep their expectations in check when the time comes to apply to college.

The retirement talk is just as crucial, because for most of us, starting early is key. Case in point: Saving $200 a month for 20 years will result in an ending balance of $88,000 if your investments generate an average annual 6% return, which is well below the stock market's historical average. But if you double your savings horizon by starting two decades earlier, after 40 years, you'll have $371,000 -- more than quadruple what you would've had in the previous scenario. And while your children may be too young to contribute money to a retirement account now, they should know how essential it is to start saving the moment they start working.

Talking to your kids about money could be one of the most valuable things you'll ever do as a parent, and the more transparent you're willing to be, the more your children stand to learn. It may not be the most comfortable conversation you'll ever have, but it sure beats busting out those anatomy drawings and watching your kids' faces turn red.