There's no question that the stock market is a notoriously unpredictable beast. It's this volatility, in fact, that causes some folks to avoid stocks altogether and stick to more conservative investments. But if there's a more positive quality the stock market is known for, it's the ability to generate strong returns and help investors reach their savings goals.

However, a growing number of older Americans seem to be losing confidence in the stock market's potential. According to a newly released study by United Income, between 2002 and 2014, the average older adult thought the stock market had a less than 50% chance of increasing on an annual basis -- even though most major indexes increased in all but two years during this period. On the flipside, younger Americans maintained their confidence in the stock market during that time and believed it had a more than 50% chance of increasing for the bulk of that period. 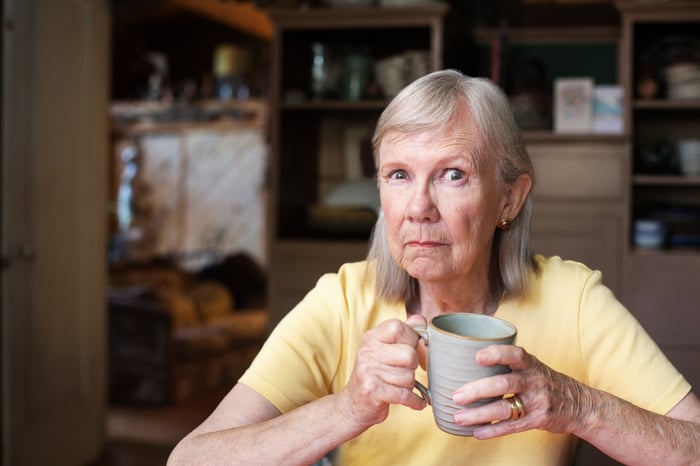 While it's difficult to pinpoint an exact reason for the shift in thinking among older Americans, this prevailing attitude poses a significant problem. If older investors aren't confident in the stock market, they're not going to put their money in it. And if they don't, they'll risk coming up short in retirement.

Those who follow the stock market know it has the potential to decline at any time. In fact, countless investors consistently spin their wheels trying to time the next big recession. But the thing to remember about the stock market is that more so than anything, it has a tendency to recover from whatever hits it takes.

That's what makes older Americans' view of the stock market so surprising. The 1990s were a period of relatively strong market growth, and though things took a turn for the worse in the early 2000s, the 2001 recession was fairly brief in the grand scheme of things -- and it shouldn't have been enough to change older Americans' sentiments as early as the following year. Yet according to the aforementioned study, senior investors had a more negative view of the market by 2002.

One explanation is that investors just plain get more nervous and less confident about finances in general as they age. In other words, this attitude may be a symptom of getting older, and less so a reflection of the market's actual performance. In 2014, for example, adults 64 and older were more than 40% less optimistic about their future financial health, over 30% more skeptical about future economic growth, and 40% less confident in future stock market increases, compared with adults 35 and under.

Of course, the period of 2002 through 2014 did see its share of market upheaval -- notably, the onslaught that came to define 2008. But had older folks not invested in stocks during this period, they would've missed out on a near doubling in stock prices over that decade and change, despite the major market hit that fell smack in the middle.

And there lies the danger of losing faith in stocks. If negative feelings about the market cause too many older adults to pull out of it, they'll end up compromising their long-term financial security. Talk about a self-fulfilling prophecy.

Stocks can fuel your retirement

Given the increasing reliance on independent savings to fund retirement, older Americans who shy away from stocks, whether because of pessimism or old-school fear, risk building inadequate nest eggs. Imagine you're able to contribute $500 a month to a retirement plan over a 20-year-period -- say, age 50 to age 70. A stock-heavy portfolio might easily deliver an average annual 8% return (that figure is actually a bit below the market's average), which would leave you with roughly $275,000 in total savings. But if, under the same circumstances, you were to build a portfolio where stocks are glaringly absent, you might only see an average annual 4% return, which would leave you with nearly $100,000 less in retirement income.

Staying away from stocks means limiting your investments' opportunity for growth, and when you go that route, you risk running out of money later in life. Another thing to consider is that the 4% rule, which countless financial experts have relied on for years to guide withdrawal strategies in retirement, assumes a relatively healthy mix of stocks and bonds in retirement. If your negative feelings about stocks lead you to avoid them completely, you may come to find that your investments don't hold up in the face of retirement expenses and inflation.

While changing your attitude about stocks might be easier said than done, don't let those unsavory sentiments destroy your retirement in the process. Stocks have long been the cornerstone for successful long-term investing, and while you may not like them, you should think twice before shunning them completely.