The student debt crisis isn't limited to 20- and 30-somethings. A growing number of parents are borrowing money to send their kids to college and putting their retirement at risk in the process.

We hear a lot about how students are graduating from college with even greater debt loads than ever before. Case in point: The average class of 2016 grad owes a whopping $37,172, up 6% from just one year prior.

But it's not just students themselves who are shouldering the burden of educational debt. In a recent survey by Student Loan Hero, 55% of parents who helped their kids pay for college are now walking around with more than $40,000 in student debt -- debt that technically shouldn't be theirs. Worse yet, 23% of parents owe more than $50,000 for their kids' education. And while some parents will inevitably ask their children to help pay down that debt, of those surveyed, 39% are convinced their kids won't contribute a dime. 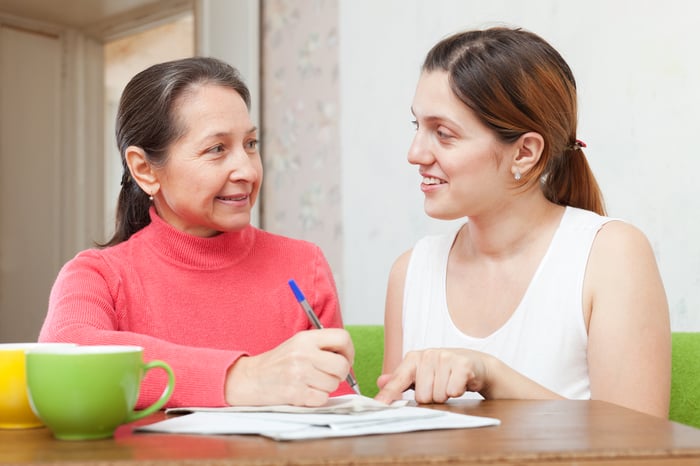 Of course, paying for a child's education is a noble undertaking in its own right. But if you're among those parents who are now loaded with debt, you may come to regret the decision later on.

Student debt can destroy your retirement

The danger of taking out loans to fund your child's education is that unlike your newly minted graduate, you have a pretty limited window for repaying that debt. Think about it: A 22-year-old college grad has his or her entire career to pay back that sum of money, but by the time your child graduates, you're most likely in your 50s, which means you get, at most, a decade and a half to eliminate that debt in time for retirement.

What happens if you don't pay off those loans by the time you retire? Nothing, technically, except for the fact that you'll be living on a fixed income at that point, and will need whatever money you come by just to pay your basic living expenses. Forking over a portion of your limited income to repay a student loan balance could make for a rather cash-strapped retirement, and if you think you can get away with evading that debt once you reach a certain age, think again. If you don't make your loan payments as scheduled, you risk having your Social Security benefits garnished -- because that's what happened to an estimated 173,000 seniors back in 2015.

Furthermore, if you don't pay off the student loans you took out for your kids' sake in time for retirement (which is a tall order, considering you'll most likely be trying to knock out your mortgage simultaneously), you risk carrying that debt with you to the grave. And that's not a risk worth taking.

How much do older borrowers owe?

According to the U.S. Government Accountability Office, as of 2015, there were 2.8 million people aged 60 and over saddled with student debt. Ten years prior, just 700,000 folks in that same age group still held student loans.

Honorable as it may be to shield your offspring from the horrors of student debt, you'll only end up doing yourself a disservice by taking out loans so that they don't have to. A better bet is to start saving for college while your children are young (or, better yet, before they're even born) to help cover the ever-growing cost of higher education. If you open a 529 plan, you'll get the benefit of tax-free growth on your investments, provided you use that money for qualified purposes. If you're eligible, you might also look at a Roth IRA as a practical college savings tool. Though neither account gives you an immediate federal tax break for contributing, because of the tax treatment involved, you can grow a series of modest contributions into a sizable sum if you start early enough.

Say you begin saving for college in either type of account when your child is born. If you consistently put away $200 a month, and your investments generate an average annual 7% return, you'll be sitting on over $81,000 by the time college becomes a reality.

Even if you aren't able to save enough to avoid student loans, let that debt be your children's problem and not your own. Otherwise, you run the very real risk of struggling financially in retirement as a result of those nagging payments. And, really, you deserve better.