Though the fact that women typically earn less money than men has always spelled trouble on the retirement front, recent data reveals that most women don't have the knowledge necessary to make long-term financial decisions. Specifically, only 18% of retirement-age women could pass a basic quiz on planning for the future, whereas 35% of men could do the same.

But that's not the only negative piece of data on women and retirement to come out lately. According to new research from the George Washington University Global Financial Literacy Excellence Center, women in their 50s are more financially fragile today than they were a generation ago. Not only has debt doubled for women in their 50s since the early 1990s, but twice as many 50-something females have less than $25,000 in savings. And that's a real problem, because women who are already in their 50s are generally looking at just 10 to 15 years to eliminate debt before retirement and catch up on building a nest egg. When we throw in the fact that women tend to live longer than men, and therefore require more savings, it becomes all the more critical for older female workers to clean up their finances while they still have an opportunity to do so. 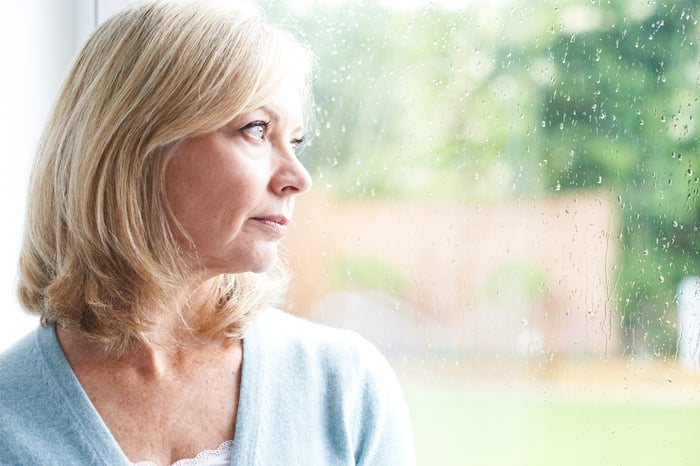 Why older women struggle to save

It stands to reason that the less money you earn, the less you'll have available to save. Now the wage gap numbers (meaning, the extent to which men outearn women) tend to bounce around from year to year, but generally speaking, women are said to earn anywhere from $0.77 to $0.83 for every dollar taken in by their comparably qualified male counterparts. This means that even if they save the same amount of their salaries percentage-wise, they're still apt to lag behind men. It's no wonder, then, that women typically have less money available during retirement.

Furthermore, because women earn less, it's difficult for them to pay off debt once they incur it. And new data tells us that females' debt problems may begin as early as college, with women borrowing $3,100 more, on average, than men to finance an education. As such, it takes women almost two years longer, on average, to repay their student loans.

The bad news in all of this, obviously, is that the above research spells trouble for women on many fronts. The good news, however, is that women have options for overcoming the obstacles they face and improving their finances, both now and in the future.

A proactive approach to a healthy financial future

Despite their lack of retirement-planning knowledge, women are generally good investors, and a lot of that boils down to their tendency to ask questions, be patient, and take a disciplined approach to building wealth. That said, it's clear that women still have some catching up to do -- especially those in their 50s who have yet to amass $25,000 for retirement. If you're one of them, your best move is to ramp up your savings rate immediately and get as much cash into your IRA or 401(k) as possible.

If you're 50 or older, you can contribute up to $6,500 a year to the former and a rather generous $24,000 a year to the latter. Even if you can't max out either of these limits, saving $5,000 a year for 15 years will give you an additional $108,000 to work with in retirement, assuming your investments are able to generate a relatively conservative average annual 5% return during that decade and a half.

Furthermore, if you're offered a 401(k) through your job, increasing your savings rate will help ensure that you're able to capitalize on whatever matching incentive your employer offers. And that's an easy way to snag some extra cash for the future.

At the same time, you'll want to work on knocking out debt (especially the non-mortgage kind) so that those payments cease to hang over your head once retirement rolls around. If your current income doesn't allow you to rapidly rid yourself of debt, it pays to consider a side job. Another option, of course, is to cut back on certain living expenses to free up that cash, whether it's downsizing your home or forgoing certain luxuries for a couple of years, like cable or restaurant meals.

No matter what steps you take to save more and owe less, the key is to act while you still have some time left on your side. It's your best hope for retiring on time and not struggling financially during your senior years.

Older Women Are in Worse Financial Shape Than Before, Data Says @themotleyfool #stocks Next Article
Current