Half of baby boomers have $100,000 or less saved for retirement -- and this cost could bankrupt many of them.

The statistics are scary: Roughly 81% of Americans admit to not knowing how much they'll spend in retirement. And who can blame them? The conventional wisdom, which is that you'll end up spending a little less per year on day-to-day than you do before you retire, might actually be wrong.

And while much ink has been spilled about how expensive healthcare is in retirement, even the most rigorous numbers (like Fidelity's estimates that healthcare will cost $275,000 per couple retiring today) are based on averages that cannot take into account all the possibilities. In fact, those estimates neglect a major healthcare expense that could dwarf your other costs -- one that, according to BlackRock, 70% of retirees will likely encounter in some form. 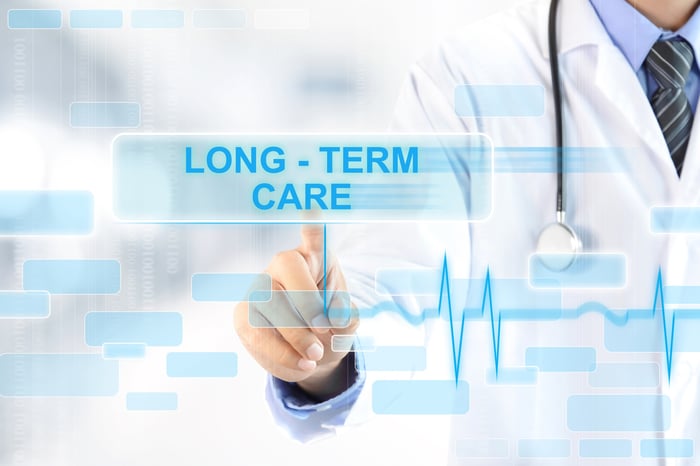 As you age, your body begins to break down. You become more susceptible to a lot of nasty diseases and conditions, many of which either result in death or chronic illnesses that need outside support. In fact, 80% of older Americans suffer from at least one chronic disease. Whether it's partial paralysis from a stroke or mental difficulties from dementia -- or, for that matter, just age-related physical weakness -- many elderly Americans struggle with activities of daily living (ADLs).

When that happens to a loved one, you're faced with some tough choices. Think of the necessary interventions as points on a spectrum stretching from more freedom to more support. On the "more freedom" side, the elderly person is staying in their house but will need regular, daily assistance of some kind. Support from their spouse -- likely similarly aged -- is a possibility but carries the obvious problem that they may also suffer from chronic conditions. Support from another family member is possible but comes with significant time and money costs (more on that below). It's also possible to hire a home health aide who can help with those ADLs (such as bathing).

Depending on the severity of the condition, stronger interventions may be required. Assisted-living facilities allow elderly residents to maintain some freedom, usually with a private apartment and regular support from staff to ensure residents can complete their ADLs. Some have memory care wards to specifically cater to dementia patients, too. Nursing homes occupy the extreme "more support" end of the spectrum, as they provide an inpatient setting for long-term treatment.

The only long-term care option that doesn't have a direct dollar cost is moving in with your elderly loved ones and providing daily support yourself. It's a popular decision -- according to statistics provided by the National Alliance for Caregiving and the AARP in 2015, approximately 34 million Americans have provided unpaid care to an elderly adult in the trailing 12 months.

Of course, it's tough to hold down a job and be on-call for someone's health at the same time. So while there may not be direct costs, there are plenty of indirect, hidden ones.

The costs for other interventions are fairly straightforward, according to LongTermCare.gov:

*Assuming eight hours of work per day on the reported hourly wage of $20.50.

What's worse, Medicare doesn't cover most long-term care. (Technically speaking, Medicare may pay for up to a 100-day stay at a skilled nursing facility, but on average it only covers 22 days, and frankly even 100 days isn't a long stay if an elderly person's health is in permanent decline.) Medicaid will help in many circumstances, but being eligible for Medicaid means the person has exhausted most of their financial resources. Not an ideal outcome.

I mentioned above that Medicare doesn't pay for long-term care. Fortunately, there is insurance for long-term care -- titled, not shockingly, "long-term care insurance." And if you buy it while you're young, your premium is usually quite low since the insurer expects to just pocket that monthly payment for decades before it has to pay out a dime.

One of the problems with this strategy is that plenty of long-term care insurers reserve the right to increase your premium. That could leave you in a nasty bind further along in life, having paid thousands of dollars for protection you didn't yet need, only to have the terms of the agreement changed when you actually start needing it. Bottom line: If you go this route (or if a parent did a long time ago when they were a young adult), make sure you understand exactly when and by how much the insurer can change the premium.

Some life insurance policies provide access to Accelerated Death Benefits (ADBs), which enable policyholders to tap their policy before they die if they need long-term care. Now, whole life insurance is usually not a good investment, but if your parent already has it, it's worth checking to see whether they can tap it in one of the situations I outlined above.

Unfortunately, the solutions I laid out above -- as well as other possibilities, like annuities and tapping savings -- aren't terribly attractive. At its core, our system isn't designed to make long-term care affordable, which makes the already heart-wrenching decision of whether to pull your parent out of their home financially stressful as well.

For now, the best you can do is approach your savings with the knowledge that you will likely need to tap them to pay for either your or someone else's long-term care -- and sock more away as a result. Fortunately, there are plenty of creative ways you can boost your retirement savings -- and plenty of tax benefits to doing so.