If you think buying a house is your biggest financial decision, you might be doing it wrong.

Every time I tell someone that my wife and I are buying a house, we get bombarded with blatantly false financial tropes. "Real estate is a great investment," someone will say, or "home equity is a great savings vehicle." Those are both objectively false -- real estate has barely beaten inflation historically, and your house is an incredibly illiquid asset, so it's hard to get access to all that home equity when you need it. (That's usually the point of a savings account.)

But the one that really gets me going is. "It's the most important financial decision you'll ever make."

That one's way off base. 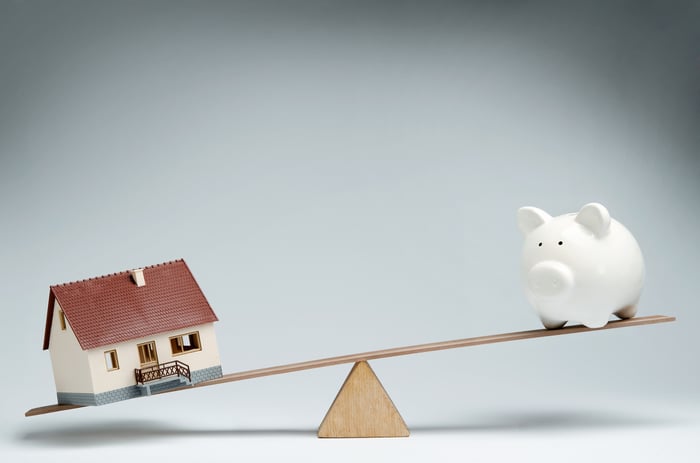 Let's break it down for a minute. According to research from the St. Louis Federal Reserve, the median price for a home sold in August 2017 was $300,200, which means the actual cost of your down payment plus mortgage is more like $463,000 over the course of the loan based on current interest rates. So it's easy to see why many Americans think it's their biggest financial decision.

It's certainly your largest individual outlay of money unless you buy a bigger house, develop a taste for private jets, or experience the sort of disaster that makes you glad your lender forced you to get home insurance.

I'm not saying buying a home isn't important -- it is. It's a big financial decision.

But it's not nearly your biggest one. Off the top of my head, I can name five that matter far more -- so make sure you're focusing as much time and energy on them as on stressing about buying that house.

1. Finding your retirement number -- and committing to it

Everyone loves the idea of retiring with enough money -- golf in the morning, bridge at 4:00, seeing the grandkids, growing old in comfort. But until you put specific dollars and cents to what all that will cost, it's just a nice dream. A full 81% of Americans don't know what they need to save for retirement, so it's no wonder we're in a savings crisis.

Start by estimating your annual retirement expenses. Don't forget to factor in healthcare; the average 65-year-old couple retiring today will spend a whopping $404,000 over the course of their retirement on healthcare, according to one study. Once you have that number, subtract your expected annual Social Security benefits, and you now know the amount you'll have to pay out from savings each year.

Multiply that by 25. You have the total amount you'll have to have in savings before you retire, using the common 4% retirement rule of thumb. Odds are, it's more than a million dollars -- and, unlike buying a house, achieving that number will have an enormous impact on your quality of life for your final 30-plus years.

According to a recent Bankrate study, American households on average carry $16,000 of credit card debt.

But it's actually quite a bit bigger, because the interest rate on that credit card debt is probably 15% or higher. The average right now is over 16%. Let's assume for the moment that you're a "revolver" -- that's the term the credit card companies use to identify people who don't pay off their credit card balance each month, and it applies to 44% of credit card accounts.

And that's assuming you don't take out any additional credit card debt over those 27 years. That's entirely unrealistic, because if you're paying out the minimums on your credit cards, chances are good that you're stretched to your financial limit and are therefore highly likely to take out more credit card debt. If you do, that amount goes up by several multiples. (And if you are maxed out on your credit cards, chances are good the interest rate charged will increase -- I've seen 25%-plus interest rates, which turn your payment plan into over 29 years and $32,000 in interest.) That's money going straight into the credit card company's wallet, leaving you poorer and probably with a worse credit score too -- which makes buying a home a lot more expensive.

Commit instead to paying down your credit card debt quickly -- taking this month's minimum payment and then paying that same amount each month, even as your actual required minimum declines, would enable you to pay everything off in five years and six months, at a cost of $7,500 in interest.

Once you've paid down credit card debt, an emergency fund with three to six months of expenses in it should be your next priority. Unlike the other decisions on this list, I cannot prove an emergency fund's importance with numbers. I can't show you how interest payments or returns will be enough to make the lack of an emergency fund cost more than a house.

What I can tell you is that half of Americans can't come up with $400 in an emergency without selling something or taking on debt. Half of Americans are one bad visit to the dentist, HVAC replacement, lost job, or failed state inspection away from financial disaster.

Perhaps not surprisingly, about half of middle-class Americans report that they're stressed about money. I can't quantify what that stress looks like. I can't predict exactly what will happen if you don't have any money for a repair and have to put it all on a credit card or take out a payday loan.

But I know that for me, the peace of mind that came from having enough money locked away that I never needed to worry about making rent was a necessary prerequisite for me to endure the stress of buying a house. And the budgeting my wife and I had to do to build that emergency fund and save for a house will leave us in a good place when the HVAC inevitably breaks.

About 40% of Americans employed in the private sector lack access to a 401(k)-style workplace retirement plan. The 401(k) plan comes with a host of benefits, not least of which is that you don't have to pay taxes on the money you contribute to a Traditional 401(k). The 2018 401(k) contribution limit is $18,500, meaning that you can get a sizable tax break for adding to your savings. Plus, that money grows tax-free until withdrawal.

What's more, the employer offering a 401(k) usually offers some matching funds to entice you to commit to saving toward your retirement (see decision No. 1). It's pretty common for employers to offer a 3% match if you contribute 6% of your paycheck.

Let's take a hypothetical example. The median U.S. household income in 2016 was $59,039, according to the U.S. Census Bureau. Let's assume you're making that amount, plan to retire in 30 years, contribute 6% of your paycheck each year (and get a 3% match from your employer), never get a raise or contribute more, and achieve 6% annual returns in the funds offered by your plan.

At the end of those 30 years, you'd have $445,258.42. That's probably not quite the retirement number amount you calculated in the first section, but it's not a bad chunk of change. If instead you maxed out your 401(k) at next year's rate of $18,500 (plus your employer match) and achieved the same returns, that'd be a cool $1.7 million sitting in your retirement account.

5. Investing in stocks (or index funds)

You don't have to be some genius stock picker to achieve those returns, either. Just be average! Index funds are a great way to get broad, low-cost exposure to the stock market without all the stress and hassle of picking individual stocks.

The 401(k) example I used assumed you were invested in stocks -- hence the 6% annual returns -- so you already know what a powerful multiplier those kinds of returns can provide for your savings. Every dollar you save today will be worth about $6.50 in 30 years if those returns hold true.

So whether it's in a 401(k) or an IRA, or a traditional brokerage account, put that cash to work in the stock market. That's how you get the million-dollar-plus retirement.

Bigger than a house -- and easier, too

The funny thing about the five decisions I just laid out is that they appear much smaller on first glance than that house purchase. What's $18,000 in credit card debt when you're buying a $300,000 house and putting sixty grand into a down payment? Why does saving a few bucks in a 401(k) matter against something that size?

And the answer is simple: It's all about the time value of money. Given time, decisions with few ramifications today can affect your wealth in massive ways. Interest rates and inflation either work for or against you. Remember that all kinds of money decisions can be much bigger than your choice of house -- so it's good to give those decisions the time and attention they deserve.