Many seniors are caught off guard when they learn that they are, in fact, responsible for paying taxes in retirement. But while you may have heard that you'll be taxed on your traditional IRA or 401(k) withdrawals, as well as any income you receive from a part-time job, you may be surprised to learn that depending on where you live, your Social Security benefits could be taxed as well.

There are currently 13 states that tax Social Security income to varying degrees: 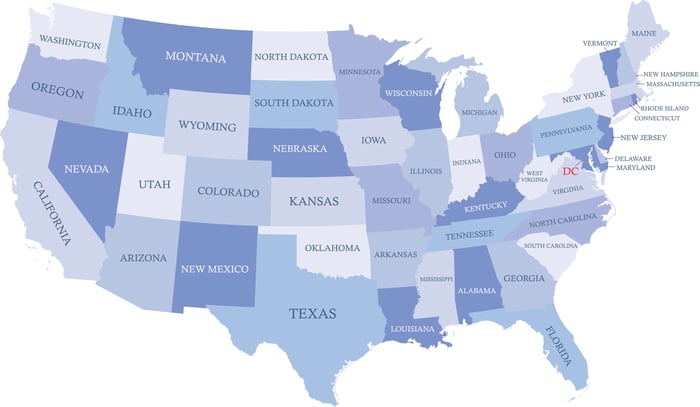 That said, just because you live in one of these states doesn't automatically mean you'll pay taxes on your benefits. Most states, in fact, offer some form of exemption that lets you off the hook depending on your income.

If you live in a state that taxes Social Security but offers an exemption, and you have a fair amount of retirement income, then you might face taxes on those benefits nonetheless. But if your income is low to moderate, you might dodge that tax bill after all.

Take Rhode Island, for example, which offers an exemption for single tax filers with an adjusted gross income (AGI) of $80,000 or less. Joint filers get an exemption up to $100,000 in AGI.

Utah, meanwhile, does things differently. While Social Security income is taxed, recipients may qualify for a retirement income tax credit that allows them to claim some of their money back. This credit, however, phases out at relatively moderate income levels ($25,000 for single tax filers and $32,000 for married couples filing jointly).

States with no Social Security exemption

Of the 13 states that tax Social Security benefits, there are four that offer no exemption whatsoever: Minnesota, North Dakota, Vermont, and West Virginia. Keep that in mind if you're retiring in one of these states.

Where to live in retirement

At this point, you may be thinking that it doesn't pay to live in a state that taxes Social Security income, because that's just one more tax you'll have to worry about. But in reality, your decision on where to retire shouldn't be based on Social Security taxes alone.

When figuring out where to live in retirement, you'll need to consider factors such as cost of living, transportation, amenities, and climate. It could be the case that while you'll lose some of your benefits to taxes in one of the aforementioned 13 states, your income will go further based on things such as housing prices, fuel costs, and so forth. You might also be happier paying taxes on your benefits but living someplace where you'll enjoy a better quality of life.

Healthcare is another important consideration when choosing a place to retire. Missouri, for example, ranks second on our list of the best states for senior healthcare, so it might be a contender despite the fact that it taxes Social Security benefits. On the other hand, Connecticut is one of the worst states for senior healthcare, so the fact that it taxes benefits might make it an even less appealing choice.

Ultimately, you shouldn't rule out these 13 states just because they impose taxes on Social Security -- which, if you've saved nicely, might constitute just a small portion of your total retirement income. Rather, look at the big picture when choosing where to spend your golden years.