Think you'll never be a millionaire? It's easier than you might expect.

When we think about what it means to be wealthy, our minds can go in a variety of directions. For some, earning $100,000 a year might be enough to propel oneself into the "rich" category. For others, you'd need to double or triple that figure. And while there's no single, clear-cut definition of wealth in America, the general consensus seems to be that you'll need to amass $2.4 million in order to get there. At least, that's the latest from a recent Schwab study, which also defined being wealthy as getting to enjoy life and having the ability to afford whatever you want.

Of course, you may or may not agree with that assessment. But what you are probably wondering is whether you'll ever reach the point where you get to call yourself wealthy by Americans' standards. And I'm here to tell you that amassing $2.4 million is actually easier than you might assume. 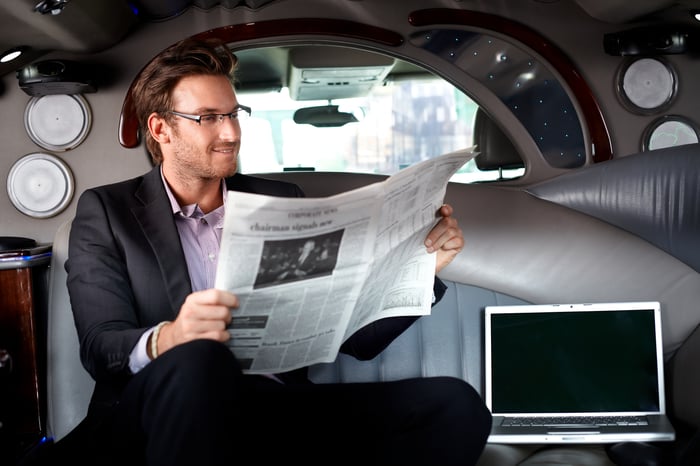 Is $2.4 million within your reach?

Let's be clear about one thing: Unless you win the lottery or come into a major inheritance, you're not going to find yourself $2.4 million richer overnight. On the other hand, if you're willing to save consistently throughout your career, and invest your savings wisely, you stand a solid chance of retiring with that much money or more.

First, the savings part. If you have access to a 401(k), which most working Americans do, you're in luck, because these plans offer an extremely generous annual contribution limit. Come 2018, you'll get to sock away up to $18,500 a year if you're under 50, or $24,500 a year if you're 50 or older. And while you could choose to save in a traditional brokerage account instead, thus negating the need to worry about annual limits, doing so doesn't offer the same tax advantages, such as tax-free contributions and tax-deferred growth on investments.

So let's talk about growth, because while saving a healthy portion of your income is part of what'll get you to millionaire status, investing it wisely is just as important. When you put money into a retirement account, the last thing you want to do is let it sit in cash earning minimal interest. Rather, you should be investing that money, and ideally in stocks, to grow it into a larger sum over time. It's a concept known as compounding, and it's what allows you to turn a series of modest contributions into what could be several million dollars down the line.

That's right -- you don't actually need to max out your 401(k) every year of your career to retire a millionaire. If you start saving consistently from a young age, and generate strong returns on your investments, you don't even have to get particularly close.

Not convinced? Then check out the following table, which shows how much of a nest egg you stand to amass based on when you first start saving:

Notice a few things: First, in our example, we're talking about contributing $800 a month, or $9,600 a year, toward retirement, and while that might seem like a lot, it's only about half the annual 401(k) contribution limit for younger workers. Secondly, our calculations assume an average yearly 8% return, which is actually a bit below the stock market's average.

Finally, these numbers allow for some leeway in the event you didn't start saving for retirement the moment you entered the workforce. In our example, saving $800 a month for a solid 45 years results in a nest egg of nearly $4 million. But even if you miss out on a few crucial years of savings, and don't start putting money until your late 20s, you can still retire with the $2.4 million needed to achieve "wealthy" status. And if you push off saving until your early or even late 30s, you're still looking at over $1 million either way.

And there you have it: You can retire with $2.4 million if you're willing to start at a fairly young age and are smart about how you invest. So the next time you imagine those wealthy folks lounging around in the backyard pool or cruising around town in their fancy sports cars, remember that if you play your cards right, one day, you might easily be one of them.