The good news? IRA and 401(k) balances have risen. The bad news? Countless workers are still far behind.

We hear a lot about how Americans are behind on retirement savings and are therefore putting their future at risk. So it's always nice to get some good news on the retirement front, and in this regard, Fidelity just came through with some encouraging numbers. For the first time ever, average 401(k) and IRA balances hit six figures at $104,300 and $106,000, respectively.

Additionally, long-term 401(k) savers saw sizable increases in their account balances. Among those who have been contributing to an employer plan for 10 straight years, the average account balance increased to $286,700, up from $233,900 just a year earlier. And among those who have been contributing steadily for 15 years, the average balance climbed to $387,100, up from $318,500 in the last quarter of 2016. 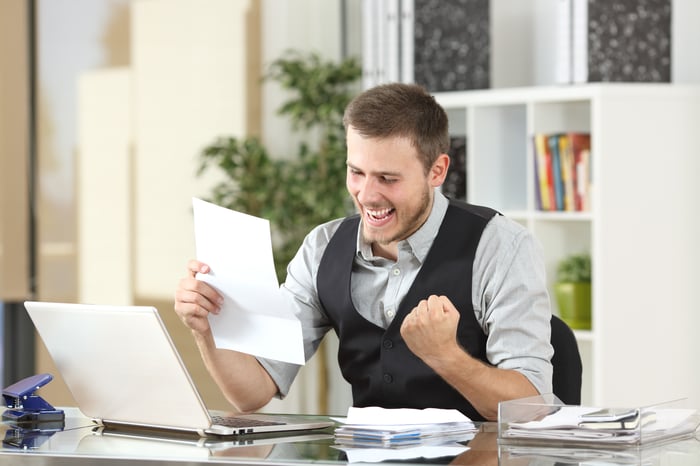 Clearly, this is all positive news. But before we get too excited, let's remember a couple of things. First, 2017 was a killer year as far as the stock market was concerned. And while there's no reason not to expect sizable stock market growth in the future, let's remember that most years probably won't quite mimic the previous one.

Furthermore, while it's encouraging to see that the average retirement plan balance went up for both IRA and 401(k) savers, the figures we're looking at are far from impressive for workers who are already midway through their careers or beyond. In other words, a balance of $104,300 or $106,000 might be fine for a 30-year-old. But for someone in his or her 40s or 50s, that's hardly an amount to get comfortable with.

If your retirement plan balance is hovering around the aforementioned averages right now, and you're already a good 15 years or more into your career, then it's time to start thinking about ramping up your savings rate. Otherwise, you risk falling short when the time comes to call it quits.

How much savings will you need in retirement?

One of the biggest challenges with regard to retirement savings is not knowing exactly how much income you'll need in the future. However, Fidelity recommends aiming for the following savings benchmarks, which are pretty spot-on:

Now, on a national level, the average American under 65 is earning roughly $46,400 per year, which means that if you're 30 years old with that salary and have accumulated something in the ballpark of $104,300 to $106,000 already, you're in pretty good shape. But if you're an average earner who has that same balance at age 45, you're only about halfway toward where you need to be. In addition, if you're hoping to amass 10 times your ending salary by age 67, which is full retirement age for Social Security purposes, then you'll really need to work on getting as close as possible to maxing out your IRA or 401(k) contributions if you're in your 50s or older and your current balance is hovering around the $104,300 or $106,000 mark.

So how do you get there? For one thing, examine your budget and find ways to cut corners. And if you don't have a budget in place, create one immediately. Only once you get a strong sense of where your money is going can you take steps to reduce your expenses and free up more money for savings.

If you're not convinced that eking out a bit more savings will do much, consider this: If you're 40 years old and start setting aside an extra $100 per month for retirement for the next 27 years, you'll come away $105,000 richer provided your investments generate an average annual 8% return, which is still below the market's average. If you make that an additional $200 a month, you'll have roughly $210,000 more to work with as a senior.

Another critical move: If you have a 401(k), be sure to contribute enough going forward to take advantage of whatever match your employer is willing to give you. Snagging an extra $1,000 or so per year could help you catch up significantly if you're currently behind.

While it's reassuring to see retirement plan balances reach an all-time high, let's not forget that part of that could be a product of temporary inflation resulting from unusually strong market performance. In other words, if we check those same balances later this month, there's a good chance they'll have dipped back down given the recent bout of volatility we all experienced.

Let's also remember that while a balance of slightly over $100,000 is impressive for someone with 10 years of work experience or less, it's hardly much to write home about for a 40-, 50-, or 60-year-old. So if there's one takeaway here, it's this: Keep doing your best to save as much as possible, and don't count solely on the stock market to grow your wealth for you. Securing a comfortable retirement requires an ongoing savings effort, but if you make it a priority, chances are, you'll get there.