The average American will spend more than $300,000 on "impulse buys" during their adult lifetime, according to a new study. While most people make unplanned purchases from time to time, you might be surprised at how much of a difference cutting back could make. Here's a rundown of Americans' impulsive spending habits, and how much money a small reduction in your own impulse buying could produce over the long run.

How much are we spending on impulse purchases?

The average American makes three impulsive purchases every week, or 156 per year, according to a recent OnePoll study commissioned by Slickdeals. 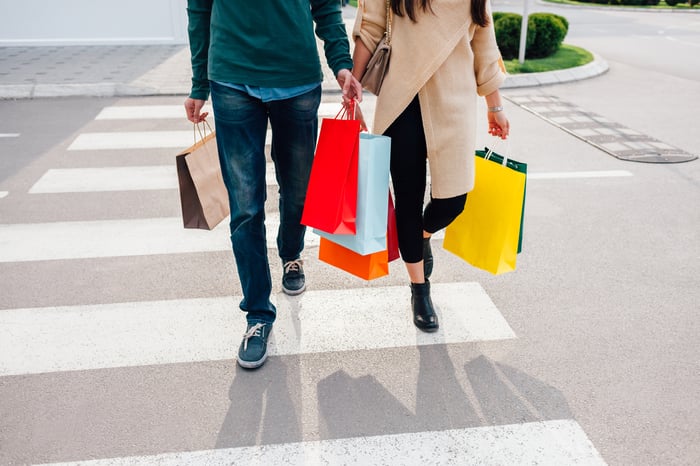 This includes purchases such as vacations, new clothing and household items people saw and had to have, and unplanned food purchases, among others. I'm guilty of this, as well, especially with regard to eating out -- my wife and I will often decide to eat at a restaurant rather than cook at home simply because we were walking or driving by and thought it looked good.

In fact, food items are the most common type of impulse purchase, with shoes and vacations also ranking highly. Impulse purchases are more likely when you're in a good mood, and December is the most active month of the year for impulse buying.

According to the study, the average person spends $450 per month impulsively, or $5,400 per year. Over the average adult's lifetime, this translates to a staggering $324,000 of impulse purchases.

Not all impulse spending is excessive

To be fair, not every impulsive purchase is 100% excess spending. Of course, things like impulsive vacations and spending on luxury items that you can easily live without can potentially be completely avoided, but this isn't always the case.

For example, if you impulsively decide to stop for a fancy dinner because you saw a new trendy restaurant, you still would have had to eat -- you just likely wouldn't have spent quite as much. Additionally, while some unexpected purchases are made because an item is on sale, many impulsive purchases are made at full retail, and if you plan a purchase ahead of time, you're more likely to shop around, use a coupon, or otherwise try to find a bargain.

My point is that although the average American spends $5,400 annually on impulse purchases, this isn't all unnecessary spending. Some of it, but not all, is certainly money that would have been spent anyway.

Better yet, if you were to take that $1,000 you saved and invest it, it could add up to nearly $200,000 added to your retirement nest egg based on 7% average returns. And keep in mind that for the average American, $1,000 per year is a pretty mild reduction in impulse spending.

The takeaway: Think before you spend

The bottom line is that you don't need to completely cut out impulsive spending -- just a mild reduction can make a big difference over the long run. This is certainly something to think about when you see a new state-of-the-art TV that you "need," an expensive pair of shoes that catches your eye, or even the checkout candy in the grocery store. By being a bit more selective about your impulsive spending, it can add up to greater financial security later on.