Thinking of taking benefits as soon as possible? You may need a new plan instead.

The decision to file for Social Security isn't one to be taken lightly. Though your benefits themselves are calculated based on your 35 highest years of earnings, the age at which you initially claim them can cause your monthly payments to go up, go down, or stay the same.

If you file for benefits at your full retirement age, or FRA, which is either 66, 67, or somewhere in between depending on when you were born, you'll get the full monthly benefit you're entitled to based on your work record. But you don't have to wait until FRA to take benefits. In fact, you can file as early as age 62, or hold off until 70 for the maximum benefits boost. 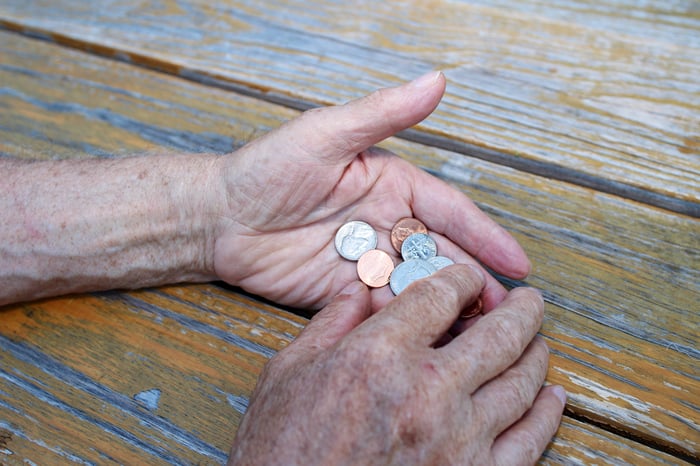 Seniors, however, tend to favor the former option much more so than the latter. While only a small percentage delay benefits until 70, 62 remains the most popular age to file for Social Security. Yet new data from the National Bureau of Economic Research has found that claiming benefits early is associated with a greater probability of living below the poverty line. And that's reason enough to consider waiting on benefits until full retirement age or beyond.

The problem with filing for benefits early

Though you're allowed to get at your benefits up to five years ahead of full retirement age (assuming yours is 67), doing so comes at a cost -- namely, that you'll face the highest possible reduction. How bad a hit are we talking? Let's say you're entitled to $1,500 a month at an FRA of 67. Filing at 62 would reduce each payment you receive to just $1,050.

Still, it's important to understand the impact reduced benefits will have on your retirement. Unless you're kicking off your golden years with a healthy nest egg or have a solid employer pension, Social Security will likely come to constitute your single greatest source of monthly income (even though the program was never designed to serve that purpose). Therefore, slashing that income stream substantially could easily result in a scenario where you're struggling to pay your bills as a senior. And really, you deserve better.

Won't it all just even out anyway?

You may have heard that it actually doesn't matter when you claim Social Security, because the program is designed to pay you the same lifetime total regardless of when you initially file. And there's definitely some truth to that. Much of the time, you'll break even because any reduction in monthly payments you face by filing early will be offset by the greater number of individual payments you collect.

But that all assumes one key thing: that you live an average life expectancy. For better or worse, Americans are living longer these days, so if you end up thriving well into your 90s, you could lose out big time by filing for benefits ahead of FRA.

Let's go back to our example. If you're looking at an FRA of 67 and a full monthly benefit of $1,500, you'll mostly break even if you end up living until roughly 78-1/2. But what if you end up living until 90 -- which, according to the Social Security Administration, one in four Americans turning 65 today will do? Suddenly, you stand to lose out on over $61,000 in your lifetime by pulling the trigger on Social Security at 62 instead of waiting until 67.

Of course, claiming benefits as early as possible isn't always a bad idea. If your health is poor, for example, and you don't expect to live a very long life, then you'll generally come out ahead financially by filing sooner rather than later. Similarly, if you lose your job later in life and can't pay the bills without it, you're better off claiming Social Security than racking up costly debt to cover your living expenses. But unless you have a truly compelling reason to take benefits the moment you're eligible, consider what you stand to gain by waiting and what you might lose by not being patient. An estimated 25 million seniors live at or below the poverty line at present, and the last thing you want to do is make a decision that increases your chances of joining their ranks.