And it's time to do something about it.

Though the student loan crisis is by no means limited to younger adults, millennials in particular are saddled with educational debt, and it's hurting their savings efforts. And while it stands to reason that younger adults with outstanding loans might have less money to their names than those without debt, the actual gap is pretty shocking.

Millennials who carry student debt have 46% less money in the bank than millennials without loans. Meanwhile, those with loans have almost $19,000 less in retirement savings, on average, than younger folks who graduate debt-free. That's the latest from Magnify Money, which found that millennials with debt had a median balance of just $5,500 in savings and checking accounts combined -- not enough to constitute a solid emergency fund for most people. 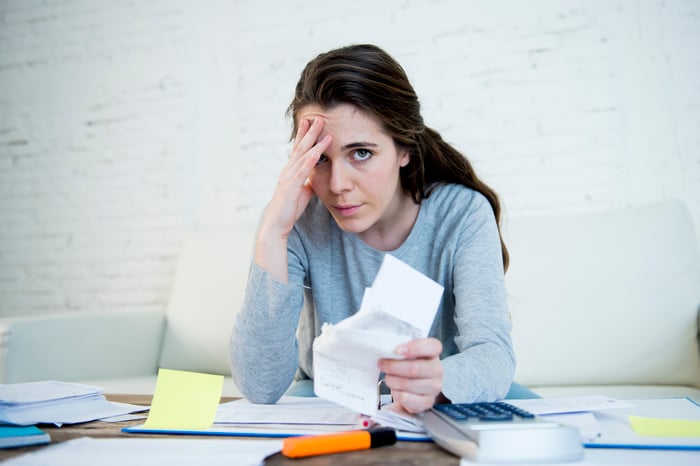 The news on the retirement savings front is somewhat more encouraging. The average millennial with student debt has $21,160 socked away for the future, and that's actually a pretty respectable sum for those who fall on the younger end of the millennial spectrum. On the other hand, younger folks without college debt have an average retirement savings balance of $39,905 -- far more substantial.

Of course, putting any money away is something to be proud of when student loan payments monopolize a large chunk of your income, which is the case for many indebted graduates. At the same time, you need a healthy emergency fund to protect yourself from life's unknowns, and $5,500 probably isn't going to cut it. Rather, you should be aiming for a minimum of three months' worth of living expenses in the bank, and unless your expenses come in at well under $2,000 a month, you're probably falling a bit short.

Similarly, the less money you set aside for the future when you're younger, the less opportunity you'll have to take advantage of compounding. And that could, in turn, cause you to come up short when you are ready to retire.

Now, make no mistake about it: Freeing up more cash to save, whether for emergencies or retirement, is easier said than done when you're grappling with student loan payments. But that doesn't mean that it can't be done. Here are a few tips for boosting your savings even while juggling those pesky loans.

1. Get a side hustle

Side hustles have become extremely common, with an estimated 44 million Americans holding one down. Working a second gig on top of your regular job is a great way to drum up extra cash, especially since that money won't already be earmarked for another purpose. In fact, 36% of workers with a side hustle bring home over $500 a month as a result. And that could go a long way toward not only padding your emergency savings and nest egg, but also chipping away at your outstanding loan balance.

If your student loans are eating up a huge portion of your income, why not look into lowering your payments? If you're able to refinance your existing loans and get a lower interest rate out of the deal, you'll reduce your monthly payments without necessarily extending the life of your loans. And once that happens, you'll have more money at your disposal to save.

While millennials are said to spend an inordinate amount of money on indulgences like fancy coffee and avocado toast, the reality is that housing is a far more substantial expense. Therefore, if you're able to lower that expense, saving money will become a lot more feasible. There are several paths you can take to reduce your housing costs, whether it means getting a roommate, downsizing to a smaller home, relocating to a less trendy neighborhood, or even going so far as to move back in with your parents. And once you do, you'll have a lot more financial breathing room.

Dealing with student debt isn't easy, but don't let yours thwart your savings efforts. Instead, take steps to sock away money in spite of those loans, and know that you'll be more financially secure for it, both now and in the future.