It may seem backwards, but sometimes the best way to achieve a secure retirement is to take more risks with your investments.

The stock market can be intimidating. When the economy is strong, your money could grow exponentially. But if the economy takes a nosedive, your hard-earned savings often go down with it.

That can be dangerous when your retirement is on the line, which is why those who are more risk-averse may choose to play it as safe as possible when it comes to their investments. And those who are risk-averse have good reason to be. The economy hasn't fully recovered since the 2008 financial meltdown, and according to the Federal Reserve Bank of San Francisco, the economic downturn cost Americans an average of $70,000 in present-value income over a lifetime.

In addition, the percentage of people who own stocks has dipped since the Great Recession, according to Gallup. Between 2001 and 2008, 62% of U.S. adults owned stocks. However, that number dropped to 54% between 2009 and 2017, indicating that many investors are still cautious about putting their money into "risky" investments like stocks. 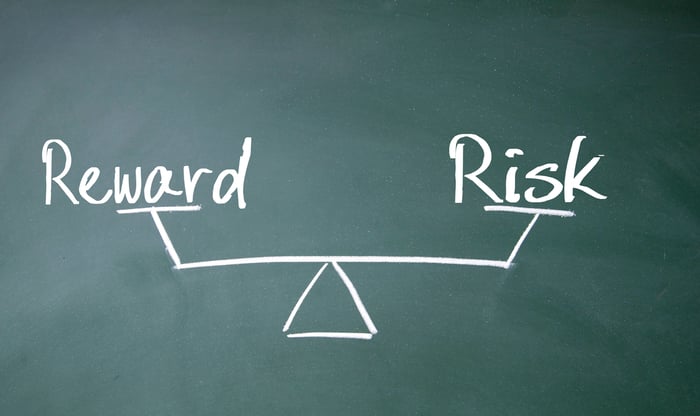 However, there's also danger in playing it too safe with your investments. It's hard enough to save for retirement, but it's even more challenging if you don't earn a significant return on your investments. And with some types of investments, you may not even be earning enough of a return to outpace inflation. That's why, if you want the best shot at enjoying a comfortable retirement, one of the best things you can do is get comfortable with risk.

At the lowest end of the scale, you have investments such as certificates of deposit (CDs), money market funds, and Treasury notes, bills, and bonds. While no investments are 100% guaranteed risk-free, these are about as close to risk-free as you can get. With CDs, for example, you make an initial investment, and the bank promises to pay you back with interest, as long as you leave the CD intact through the entire term.

Money market funds are essentially groups of CDs, short-term debt securities, and other relatively low-risk investments. These investments are more liquid than CDs, meaning you can pull your money out at any time, but they're still relatively safe investments.

Treasury bills, notes, and bonds are issued by the government, and the biggest difference between them is how long it takes them to mature (i.e., when you're paid back the principal and interest). Bills mature in one year or less, notes mature after 10 years or less, and bonds mature after 30 years. You can potentially lose money if you don't wait until the investment matures to cash out, but for the most part, Treasuries are safe bets.

The rate of return you'll see depends on the specific investment. CDs, for example, typically offer returns of 2% to 3% per year, money market funds see returns of between 1% and 2% per year, and Treasury securities typically offer returns of 1% to 3% per year, depending on the type of security (typically, the longer it takes the security to mature, the higher the returns).  Keep in mind, though, that even safer investments aren't immune to market volatility, and in recent years they have seen near-zero returns.

On the other end of the scale, you have the higher-risk investments -- namely, stocks. The riskiest investment you can make with stocks is putting all your money in just one or two individual stocks. That's not recommended, because if those stocks take a dive, you'll quickly lose a lot of your money. However, a diversified portfolio of stocks can work wonders: Though the stock market's returns can vary year by year, over the last several decades, they have seen average total returns of nearly 10% per year.

That's why it's wise to diversify your portfolio with groups of investments like index funds or actively managed mutual funds. Index funds can be either mutual funds or exchange-traded funds (ETFs), though they're more often the latter. The investments in an index funds mirror the composition of a particular index, such as the S&P 500 or the Dow Jones Industrial Average (often referred to as "the Dow"). These two particular indexes are intended to represent the U.S. economy as a whole, so when the economy is doing well, the indexes (and the index funds that track them) will generally be doing well, too. There are also indexes for more niche sectors, such as healthcare or biotech, so you have a wide variety of options.

Actively managed funds funds are typically mutual funds, rather than ETFs. They're called "actively managed" because they have a fund manager hand-picking investments, with the goal of outperforming the broader market or a particular benchmark. Because of the extra labor and expertise required, actively managed funds charge higher fees than index funds -- and the vast majority of fund managers fail to beat their benchmark. However, some do outperform, and their investing strategies may fit well within your portfolio.

What this means for your money

This isn't to say that it's impossible to save enough to retire when you're only making low-risk investments, but you'll need to invest a lot more each month. For example, if you want to save $750,000 by age 70 and you're earning a 2% annual return, you'll need to save around $1,000 per month for 40 years -- which simply isn't feasible for most people.

Also, just because low-risk investments shouldn't make up your entire portfolio, it doesn't mean you shouldn't invest in them at all. In fact, the most balanced portfolios have a mix of stocks, bonds, Treasuries, and other securities. A diversified portfolio helps to hedge your risk, so during the years that the stock market takes a dip and your riskier investments underperform, you'll still have your more secure investments holding steady.

Saving for retirement is never easy, but it's even more challenging when your money has to work harder than necessary. The stock market will always experience ups and downs, but the majority of the time, the rewards outweigh the risks.