Though the job market is in a pretty healthy state right now, recent bouts of stock market volatility have caused many Americans to question whether they're really as financially secure as they'd like to be. In fact, it's circumstances outside their control, like market performance, that keep a large chunk of U.S. adults up at night. According to a new report from Fidelity Investments, the No. 1 concern Americans have going into the new year is none other than encountering unexpected expenses. If you're behind on savings, it's an extremely valid one.

Are you prepared for an emergency?

As of earlier this year, a frightening 40% of Americans didn't have the money to cover a $400 emergency. If you're one of them, you'll need to start rethinking the way you spend money, and fast. 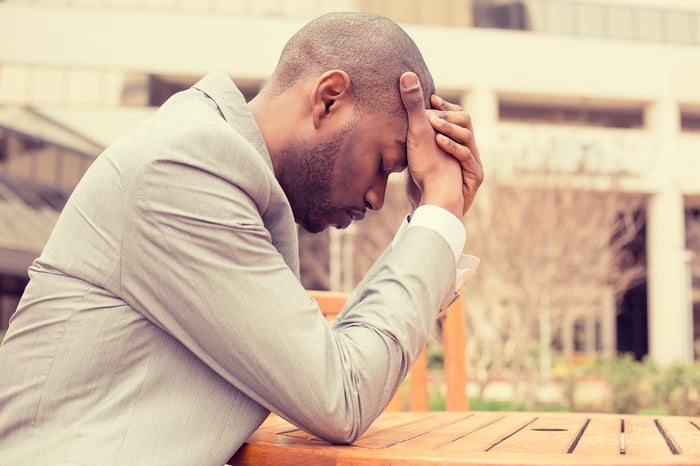 Without savings, you risk landing in serious debt the moment a sizable bill lands in your lap. And that bill could come from anywhere. It could be your car breaking down, your home's heating system dying mid-winter, or your child getting hurt and winding up in the hospital. Or you could lose your job unexpectedly. Unfortunately, there's a host of unlucky occurrences you might encounter in the new year or the year after that, and if you're not prepared financially, you'll make an already trying situation that much worse.

The solution? Build a true emergency fund -- one with enough money to cover at least three months' worth of living expenses. Better yet, aim for six months of expenses if you can manage it, as that sort of sum will really help tide you over if you're out of work for a spell.

If you're starting out with little to no money, you're not going to build a true emergency fund in a couple of weeks or even a couple of months. But if you make the right lifestyle changes, you'll get there eventually, which is better than never.

To start, create a budget so you understand where your money is going. Then pick some expenses from that budget to slash so that you're freeing up several hundred dollars a month to save. You might choose to move to a smaller apartment, get rid of a vehicle you can technically do without, or eat out much less frequently. While smaller changes, like cutting back on lattes and the occasional taxi or rideshare, will help a bit, if you really want to make progress on your emergency fund, you'll have to think bigger than that.

At the same time, look into getting a side hustle. Since the money from that second gig will be additional cash on top of your regular paycheck, you should have no problem banking it all.

Finally, pledge to put any extra cash that comes your way into the bank until your emergency fund is complete. If you get a raise going into the new year, send that additional money into savings automatically so you're not tempted to spend it. (You can set up automatic transfers with your bank.) If you get a bonus, same deal. You can even bank the $50 check your grandmother writes you every year for Christmas, because slowly but surely, even small contributions will add up.

The fact that Americans are more worried about unplanned expenses than anything else underscores the need for solid savings. Whether you believe in resolutions or not, pledge to do better in that regard as the new year kicks into gear. Not only will it buy you some much-needed financial protection, but it'll give you one less thing to actively stress about.