Talk about a major blunder.

The Social Security Administration (SSA) is by no means infallible, and many older Americans are apt to learn that the hard way after a recent blunder. The agency reported that it sent out some erroneous earnings statements in response to individual requests. And if you received one, you'll need to get the matter sorted out.

The SSA issues earnings statements on an annual basis that not only summarize worker income for the year, but also estimate benefits at retirement age. Only adults aged 60 and over get these statements in the mail. Anyone else who wants one needs to either create an account on the SSA's website and access them there, or otherwise specifically request a paper copy. 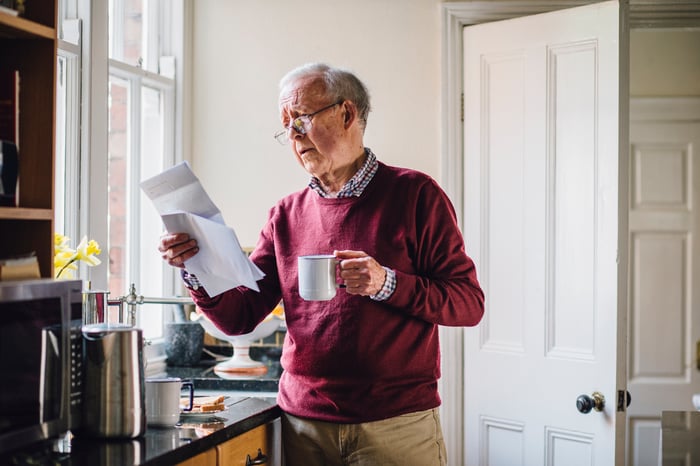 The aforementioned errors stemmed from the latter category -- people asking for paper statements. Now the good news is that of the tens of thousands of paper requests the SSA receives each year, less than 1% have contained errors, according to the agency. The problem, however, is that the incorrect statements in question have been issued since 2017, which means some people have been sitting on the wrong information about their retirement benefits for two years.

What sort of incorrect information did those statements contain? Unfortunately, the worst possible kind: erroneous benefits projections based on filing ages.

Here's how Social Security is supposed to work: Your monthly benefits are calculated based on how much you earned during your 35 highest-paid working years. You're then eligible to claim those benefits in full once you reach full retirement age. That age is a function of your year of birth, and it's either 66, 67, or 66 and a specific number of months

Meanwhile, the SSA allows recipients to claim benefits as early as age 62. Filing ahead of full retirement age, however, reduces benefits, and the extent of that reduction depends on how early they're claimed. There's also the option to hold off on taking benefits past full retirement age and snag an 8% boost for each year they're delayed, up until age 70.

The erroneous statements in question, however, didn't properly break down the difference between filing for benefits at full retirement age versus claiming them at different points in time. One financial planner, for example, noticed that a client's earnings statement seemed off when the retirement benefit listed at age 62 was almost 98% of its value at full retirement age.

But that's not possible. Even with a full retirement age of 66, claiming benefits at age 62 would result in a 25% reduction -- not a mere 2%.

And there lies the issue: Beneficiaries with erroneous statements are at risk of claiming Social Security at the wrong time because they don't understand the true consequences involved. In the above example, the recipient of the incorrect statement in question might've claimed benefits at 62 thinking he'd be looking at a mere 2% reduction, only to receive a substantially lower payment in reality.

Remember, too, that in most cases, the monthly benefit you start out collecting is the same amount you receive for the rest of your life. And that's why an erroneous earnings statement can hurt you.

Thankfully, the SSA has identified the cause of the problem and has taken steps to fix it. The agency also reports that the problematic statements were only issued to people who requested them specifically, and who met the following criteria:

Those who received erroneous statements can expect corrected versions from the SSA. But let this be a lesson to not only review your earnings statements every year, but compare new statements to previous ones. This way, if something looks off, you can dig around for the right information rather than risk being led astray.