It's easy to develop bad habits as we work our way through life. For some of us, it's going to bed way too late on a regular basis. For others, it's eating poorly. These habits can impact your physical health.

But if you're not careful, seemingly innocent habits could also harm your financial health over the long term. Here are a few particularly dangerous money habits you need to be aware of.

Without a budget, you'll have no real way of tracking your spending and seeing where your money actually goes month after month. If you don't have a budget, carve out an hour or so this weekend to set one up.

To do so, comb through your bank and credit card statements from the past year to see what your different expenses look like, and then list them on a spreadsheet along with their average costs. From there, you'll be able to see which bills you might be able to cut back on. 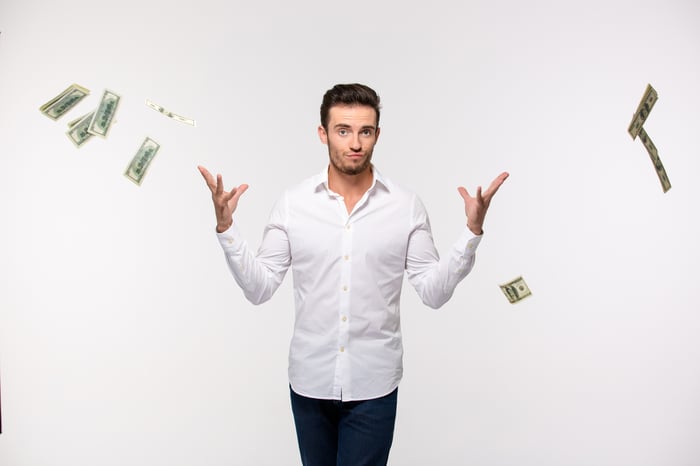 Many Americans live paycheck to paycheck with no money in the bank to fall back on. If that sounds like you, take your newly established budget and use it to make smart financial choices that allow you to save money on a regular basis.

Some of these choices could be living in a cheaper home, unloading a car you can get by without, dining at restaurants less frequently, or canceling services that eat up too much of your income for comfort, like cable or your gym membership. The key is to leave yourself some wiggle room at the end of each month, so you're eventually able to cover your bills even in the absence of a paycheck or two.

3. Relying on credit cards instead of emergency savings

It's easy enough to whip out a credit card and run up a balance when surprise bills come your way. But the longer you continue with that habit, the more debt you'll accrue, the more money you'll throw away on interest, and the more your credit score will take a hit.

A better bet? Cut back on expenses and bank the difference to build an emergency fund -- ideally, one with enough money to cover three to six months of living costs. That way, you'll have cash reserves to tap when unplanned expenses pop up.

It's hard to set money aside for the future when you have near-term bills to address. But if you don't make an effort to build some retirement savings, you'll risk struggling financially once your career comes to an end, especially since Social Security benefits typically aren't enough for seniors to live on without other income.

Though you can contribute thousands of dollars a year to an IRA or 401(k), if you're not used to saving in one, start small and work your way up. Setting aside even $50 a month for your first year or two is a good way to make progress. In fact, if you were to sock away $50 a month in a retirement savings plan for 45 years, and that plan's investments generated an average annual 7% return (which is a bit below the stock market's average), you'd wind up with over $170,000. Make it $100 a month, and you'd be looking at close to $350,000 in your nest egg, assuming the same savings window and average return.

Bad habits are hard to break -- especially financial ones. But if you make an effort to kick these sooner rather than later, your financial picture will improve in a meaningful way.