Please ensure Javascript is enabled for purposes of website accessibility
Log In Help Join The Motley Fool
Free Article Join Over 1 Million Premium Members And Get More In-Depth Stock Guidance and Research
By Maurie Backman – May 31, 2020 at 6:18AM

Older workers who lose their jobs during the pandemic may fear that they'll have no choice but to retire before they want to. But you may be able to avoid that fate.

While some people dream of retiring early, others go that route because they have no choice. In fact, a good 48% of Americans are pushed out of the workforce sooner than planned, according to a recent report by the Employee Benefit Research Institute. But the COVID-19 crisis could result in an uptick in forced early retirement.

So many older workers are out of a job right now, and given the difficulties people of a certain age tend to face when looking for employment, it stands to reason that the current crisis could result in even more unwilling retirees. But before you resign yourself to that fate, consider these options. 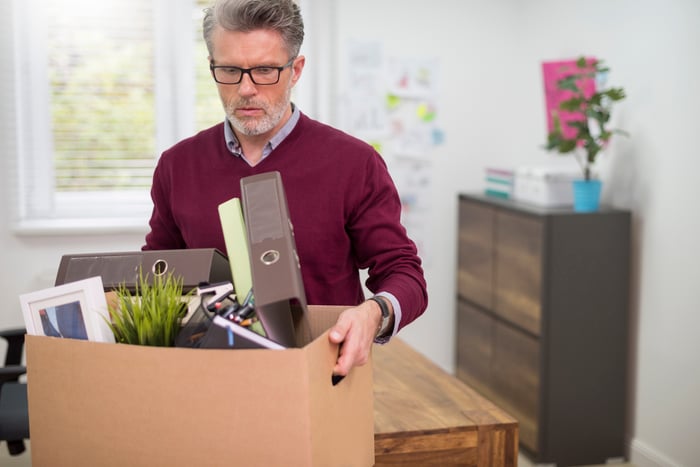 1. Rely on emergency savings and unemployment benefits to ride out the crisis

If you've lost your job during the pandemic, there's a good chance you may unfortunately remain out of work for the better part of the year, and possibly even into 2021. Much will depend on how quickly the economy is able to open up and whether science will find an effective treatment or vaccine for COVID-19. But while the idea of being out of work for that long might drive you to give up on working again, file for Social Security, and kick off your retirement earlier than planned, you may instead be able to ride out the storm by tapping your emergency fund and relying on unemployment income to pay the bills.

Right now, weekly unemployment benefits get a $600 boost, and while that's set to expire in July, lawmakers are pushing to extend it. Similarly, unemployment benefits themselves have already been extended by 13 weeks, and they may get extended further if the economic slump we're experiencing holds steady in 2020's third and fourth quarters. (For context, during the Great Recession, unemployment benefits were extended in several rounds to align with the jobless rate at the time.) Between extended unemployment and whatever money you have in the bank, you may be able to get through a lengthy period of joblessness and find work once the economy reopens fully, thereby staving off early retirement.

Living on credit generally isn't a good way to live. But if you have a healthy amount of savings and can get some leeway on paying your bills, a modest loan may tide you over so you can hold out for a new job once the economy improves. If you own a home, you can look at borrowing against it. And if you're older, there's a good chance you'll have a decent amount of equity in it at this point, thereby making that possible. If you're not a homeowner, a personal loan can be an affordable borrowing solution. Or, you can look into borrowing money from your 401(k) plan. Though there are risks involved in going that route, the upside is that when you repay that loan, you repay yourself -- not a bank.

3. Tap your retirement savings if you need to

If you're at least 59 1/2, you can access the money in your 401(k) or IRA without restriction. If you're younger than that, you'd normally face a 10% early withdrawal penalty for raiding your retirement plan, but right now, that penalty is waived if you've been impacted by COVID-19 and your withdrawal doesn't exceed $100,000. While it's generally best to avoid taking a 401(k) or IRA withdrawal ahead of retirement, doing so could actually help you avoid an early retirement. If you remove the minimum amount you need to keep up with your bills, get through the next year, and then find a new job in 2021, you'll have an opportunity to ramp up your savings at that point, replenish the money you took out of your 401(k) or IRA, and then retire at a later age as planned.

Early retirement can be a wonderful thing, but not when it's forced upon you and you're not ready for it. Even if you're out of work or your income has been compromised due to COVID-19, don't jump to the conclusion that early retirement is inevitable. A few strategic moves on your part could make it feasible to stick to your original plan.