Please ensure Javascript is enabled for purposes of website accessibility
Log In Help Join The Motley Fool
Free Article Join Over 1 Million Premium Members And Get More In-Depth Stock Guidance and Research
By Maurie Backman - May 16, 2020 at 8:47AM

The jobless rate among older workers shot up in April. If you've lost your job but aren't ready to retire, here are some options.

Read the news, and you'll see staggering numbers on the jobless front. The unemployment rate reached an all-time high of 14.7% in April, and while employees of all ages have been impacted by the COVID-19 crisis, older workers have been hurt to an alarming degree.

Of course, losing a job can be financially and emotionally traumatic at any age. But older workers face unique challenges when it comes to unemployment. During the last recession, it took workers aged 51 to 60 an average of nine months to find another job, whereas for workers aged 25 to 34, the average time out of work was less than six months, according to the Urban Institute. 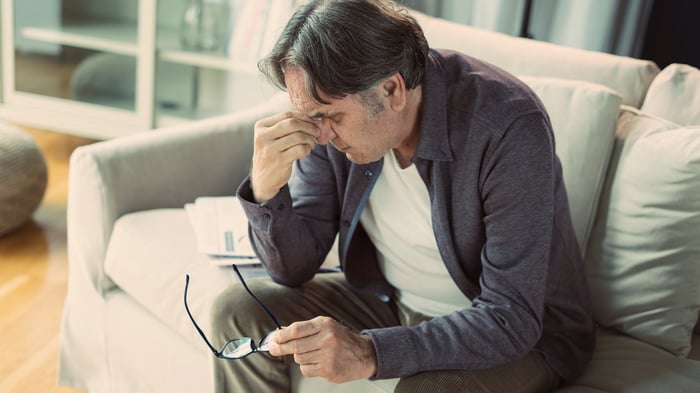 Part of the problem boils down to age discrimination. Many companies don't want to invest in older workers for fear that they'll sink time and resources into people who will up and leave shortly afterwards to retire. And then there's the perception of older workers lagging in skills and technology -- a concern that may be valid for some older members of the workforce, but one that certainly shouldn't be applied universally.

If you're an older worker who's lost a job during the COVID-19 crisis, and you're not ready to retire, you may be under a world of stress. Here are some options for riding out the crisis and keeping your career going.

1. Cut back on expenses so you can live on unemployment benefits

If you were a higher earner and are suddenly stuck with the prospect of living on unemployment benefits, that income may not be enough to sustain you. But if you were earning a more modest salary at your last job, you may be able to get by for the next few months by spending less and collecting unemployment. Right now, unemployment benefits are getting a $600 weekly boost -- meaning you get $600 on top of the benefit you'd otherwise qualify for, which in some cases may be around half of your salary. If you're able to reduce your spending simultaneously, you may find that you're able to get by on your unemployment income without having to dip into savings.

The purpose of an emergency fund is to have a means of covering your expenses during a crisis -- and a late-in-life layoff during a pandemic certainly qualifies as a crisis. Assess your savings balance and see how many months of living expenses it can cover. Remember, if you lost your job through no fault of your own, you should be entitled to unemployment benefits. If you can't live on those benefits alone, you can supplement them with money from your emergency savings.

If you're at least 59 1/2, you can remove money from a 401(k) or IRA without penalty. And right now, because of COVID-19, you can withdraw up to $100,000 from either account penalty-free even if you're not yet 59 1/2, but you've been impacted by the pandemic. Raiding your retirement plan has its drawbacks -- the money you withdraw won't be available to you once your career truly comes to an end, and if you remove funds now, you won't be able to invest that money for added growth between now and your target retirement date.

On the other hand, the investment growth you'll lose out on won't be as extreme as it would be for someone in his or her 30s or 40s. If you're 60 years old and are planning to stop working at 65, you're looking at five years of lost investment growth if you take a withdrawal now, which isn't great but also isn't terrible. That said, taking a retirement plan withdrawal now could mean locking in losses, so be careful when going this route.

4. File for Social Security early (but plan to possibly undo that filing afterward)

If you're out of work and are at least 62, you'll have the option to claim Social Security and use those benefits to tide yourself over while you look for work or wait for your employer to be in a position to rehire you. The downside of claiming Social Security early is potentially locking in a lower monthly benefit for life, but if you're desperate for money, it's an option worth looking at.

Furthermore, you should know that you can collect Social Security and unemployment benefits at the same time, and that you can also undo your Social Security filing if your circumstances change for the better. You get one year to withdraw your Social Security application and repay the money you received in benefits, and if you do, you'll get to file for benefits again at a later date and avoid a lifelong reduction in your retirement income. This solution may be feasible if, say, you claim Social Security now because you're out of work, but the economy opens up later this year and you're able to not only return to a job, but also to save enough of your salary to repay the Social Security Administration what you need to.

Losing a job during a pandemic is difficult, but having that happen when you're older can be downright catastrophic. If you've been laid off later in life, don't assume that you'll have no choice but to retire early. Rather, explore the income sources that may be available to you, and make an effort to keep your skills current and network extensively while you're unemployed. We don't know how long the COVID-19 crisis will drag on, but if you do your best to avoid early retirement, there's a good chance you'll be able to delay that milestone until you're really ready for it.