Please ensure Javascript is enabled for purposes of website accessibility
Log In Help Join The Motley Fool
Free Article Join Over 1 Million Premium Members And Get More In-Depth Stock Guidance and Research
By Maurie Backman – Jun 21, 2020 at 10:36AM

Forced retirement can have serious consequences, and right now, it's a lot of seniors' reality.

Millions of jobs have gone away during the COVID-19 outbreak, with U.S. unemployment levels reaching a record high in April. But not everyone has lost work in the course of the pandemic. In fact, many people have managed to retain their jobs by shifting to remote work. It's certainly a viable solution, and a better alternative to losing a job -- but it's also an option many older workers can't take advantage of.

There are an estimated 10.5 million members of the workforce over the age of 65, but many of them hold down jobs that can't be performed remotely. In fact, almost 80% of workers 65 and over can't telecommute, reports the Economic Policy Institute. By comparison, the same holds true for only 60% of those between the ages of 35 and 44. 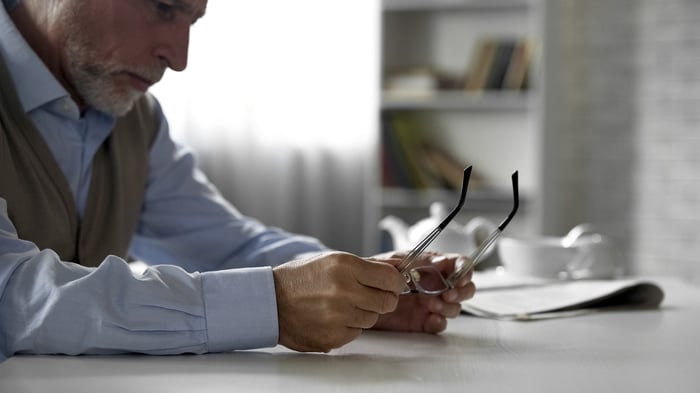 As such, most older workers have two choices right now: Keep plugging away at their jobs while risking their health, or quit and risk being forced into early retirement. Neither, unfortunately, is ideal, and as such, a lot of senior workers are having to make some very hard choices right now.

Older workers are being forced into retirement

The unemployment rate for workers aged 65 and over has already tripled since March, climbing from 3.7% to 13.2% as per the Federal Reserve of St. Louis. And while that's consistent with May's overall unemployment rate of 13.3%, after the pandemic hit, there was also a 7% increase in the number of Americans classifying themselves as retired. From that, we can deduce that a large chunk of older workers who couldn't shift to remote employment during the pandemic may have lost or left their jobs instead, thereby kicking off retirement sooner than planned.

Of course, there's a danger in that. Workers who leave the workforce ahead of schedule risk falling short on savings, and they can also land in a position where they can't maximize Social Security benefits.

And unfortunately, there's no great solution here. Older workers whose jobs aren't conducive to telecommuting may not be in a position to simply shift gears and take up skills that allow for remote employment. For example, an older bus driver can't just pivot to accounting because it's work that can be done anywhere. But one thing older Americans who are still in the workforce can do is advocate for themselves and their safety. Specifically, workers 65 and over who don't want to quit their jobs due to health concerns should demand that their employers take appropriate measures to establish a safe workplace. That could mean providing gloves and masks to employees, screening workers for fevers or concerning health symptoms at the start of each day, and implementing sanitizing procedures.

For some older workers, starting retirement early means setting themselves up for financial struggles and stress. Older workers may not be immune to layoffs as the country grapples with a recession, but those who want to stay in the workforce should press their employers to do everything within their power to allow them to safely keep their jobs.