Social Security is in a world of trouble. According to its 2020 Trustees Report, the program's trust funds are expected to run out in 2035, slashing benefits by around a quarter. While the trustees have not yet released their 2021 report yet, a memo released last November indicates that the COVID-19 pandemic probably knocked another year off the trust funds' lifespan.

As if that weren't enough, 2021 is bringing with it another massive challenge that threatens to knock even more years off the Social Security Trust Funds' lifespan: inflation. According to the Bureau of Labor Statistics, inflation has run at around a 5.4% rate over the past year. Social Security indexes benefits to inflation, and current projections suggest that benefit increases may even top 6% in 2022. That will probably put even more pressure of Social Security's already stressed trust funds. 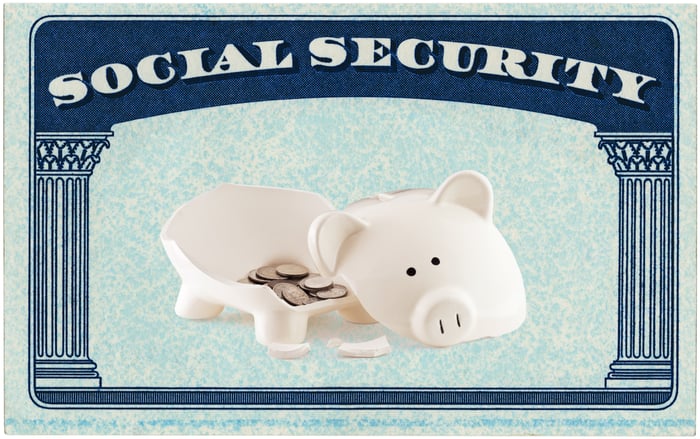 Why inflation is so damaging to Social Security

The big challenge inflation poses to Social Security's trust funds comes from the fact that Social Security is only allowed to invest in US Treasury securities. At current interest rates, that means Social Security is earning a bit below 2.4% on the nearly $2.9 trillion it holds in those trusts. A 2.4% return doesn't keep up with a 5.4% inflation rate or a better than 6% expected benefit increase, which means those already pressured trust funds are about to face an even bigger challenge.

Social Security's trustees have already signaled that COVID-19 will knock a year off the trust funds' lifespan, making it likely that the 2021 report will show the trust funds emptying in 2034. If trends continue, it would not surprise me if the 2022 report shows them emptying another year earlier -- in 2033 -- thanks to inflation.

Remember that inflation has a compounding effect on benefit costs. Social Security currently pays out around $93.2 billion in benefits each month. A 6% inflation increase adds around $5.6 billion to the bill  -- each month. And then, whatever the inflation rate winds up in 2022 would add additional costs above and beyond what would then be a closer to $98.8 billion monthly tab.

Those cost increases, combined with an asset base that by law can't earn more than what Treasuries offer, add up to even more problems for an already troubled program that millions rely on.

What this all adds up to

Although the challenges Social Security is facing appear to be accelerating, they're not exactly new news. The big change isn't that the trust funds are emptying, but rather how quickly they're probably going to empty. Two important things to recognize are the risk that implies to your retirement and the likelihood that if there's a patch to the program, you're probably going to pay for it one way or another.

After all, there are only three ways to help shore up Social Security: cut benefits, raise taxes, or improve the rate of return on the trust funds. If taxes are raised, you'll pay for it as a worker, as Social Security is largely funded through payroll taxes. If benefits are cut, you'll pay for it as a retiree, as you'll get less than you would otherwise expect based on your currently projected benefit levels. If the program's invested rate of return increases, it requires either a major act of Congress or higher interest rates.

Higher interest rates may seem like a good thing for investors looking to increase their returns, but there's good reason to believe that many stock prices are high because interest rates are low. As a result, if you're an investor when rates go up, stock prices may be at risk of falling, which could hurt your overall net worth.

One of the most powerful things you can do right now to cover for Social Security's looming problems is to invest to attempt to cover the impact the gap will have on you. Even with the collapse of Social Security's trust funds accelerating, the biggest impact is still likely to be a bit more than a decade away. That gives you time to start adjusting now and be better prepared when the program's changes come.

If taxes go up to shore up the program, it's easier to cut back on your investing to cover the take home income gap that creates than it is to cut back on your core lifestyle costs. On the flip side, if benefits go down, then the money you've saved up by investing can be used to help cover the income gap created by the lower benefits you'll receive. Either way, making small, voluntary changes now to enable you to invest will likely put you in a much better spot than being forced to make bigger changes later.

For a reasonable target for how much you should be investing to cover the gap, take a look at your most recent paystub. You should see a withholding line item for Social Security or FICA taxes. Take that amount, divide it in two, and work to figure out how to invest that much more each payday.

Since Social Security is half paid by you and half paid by your employer, half of your payment amount works out to about a quarter of the overall tax paid on your behalf. That amount every payday, invested until a patch is passed or the trust funds empty, can provide you with a solid buffer to reduce the net impact to you of whatever changes come about for Social Security.

Social Security provides a foundation for most Americans' retirement plans, but that foundation is crumbling. The sooner you get started protecting yourself against the impact of the trust funds emptying, the easier it will be for you to handle the disruption that will cause. Whether changes are driven by the trust funds dropping to zero or by Congress passing a patch, changes are coming to the program. So get started now, and give yourself your best chance of shoring up your own financial future.