Please ensure Javascript is enabled for purposes of website accessibility
Log In Help Join The Motley Fool
Free Article Join Over 1 Million Premium Members And Get More In-Depth Stock Guidance and Research
By Maurie Backman - May 17, 2018 at 7:04AM

Here's a guide to that potentially difficult conversation.

At some point during your tenure at a given company, you're apt to reach a point where you're tired of doing the same thing day in, day out. And if a promotion isn't possible, your next best bet may be to switch over to a different team.

A lateral move can help your career in a number of ways. There's just one challenge: How do you ask for that transfer without offending your current boss in the process? If you're looking to jump from one team to another, here's how to approach that delicate but necessary conversation. 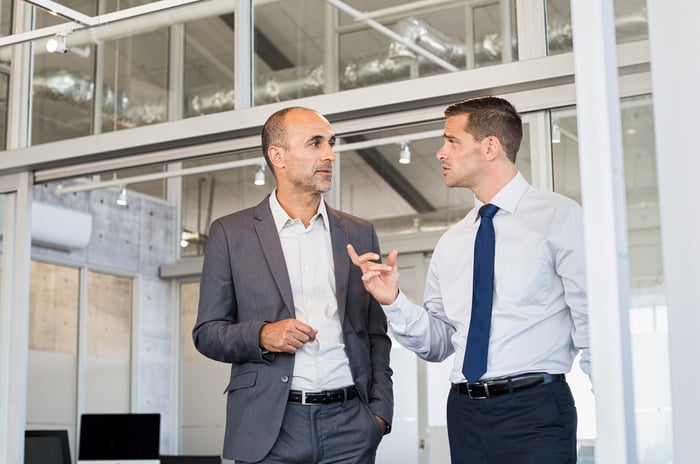 1. Schedule a sit-down at the right time

Telling your manager that you no longer wish to work for him or her can come as a blow, so don't have that discussion on the fly. Rather, schedule a face-to-face meeting where you can share your thoughts and hear your boss's thoughts at length. That said, choose a time when your boss can really focus and listen, which means don't have that meeting first thing on a Monday or at 5 p.m. on a Friday. Also, don't schedule that conversation the same week a major project your boss is overseeing is due. The last thing you want is for your manager to approach that sit-down in an already frazzled frame of mind.

2. Make it clear that it's not personal

Moving from one team to another isn't necessarily a reflection on your boss's management style -- so make that clear. Tell your boss that your career has taken a shift but explain how you got there so that your manager doesn't think you're making excuses. For example, if your boss runs a marketing team, but you've been growing increasingly interested in the analytical end of things, it makes sense that you'd want to move over to the data team. In that case, explain how reviewing that team's weekly reports piqued your interest and drove you toward that decision.

3. Thank your boss for a great experience

Your manager might feel a little hurt that you're looking to work for somebody else, even if you make it clear that it's the nature of your daily tasks that's fueling that move. Therefore, it never hurts to express your gratitude to your boss for all the things you've learned under his or her watch. You can also affirm your desire to continue working together in some capacity -- perhaps as a cross-collaboration with your new team.

4. Offer to help train a replacement

Moving to another team doesn't just mean potentially offending your current boss; it also means leaving him or her in the stressful position of having to find someone to replace you. So, make your manager's life as easy as possible in that regard by offering to train the person who takes over your role, even if it means working evenings or weekends to keep up with your new duties all the while. Your manager will no doubt appreciate that courtesy, and if your new boss is a good one, he or she will most likely agree to share you during that transition period.

There's nothing wrong with switching teams within your company. Just do your best to be mindful of your boss's feelings in the process. The last thing you want is to spoil an otherwise solid relationship when you have the ability to make a clean break.