Please ensure Javascript is enabled for purposes of website accessibility
Log In Help Join The Motley Fool
Free Article Join Over 1 Million Premium Members And Get More In-Depth Stock Guidance and Research
By Maurie Backman – Nov 10, 2018 at 5:48AM

Anyone who's put in some time in the workforce most likely has his or her share of regrets. And while it's easy to reflect on our mistakes and beat ourselves up for not being wiser, those of us who have regrets can take the opportunity to learn from them.

So how do your regrets compare to other people's? Career site Zety conducted a survey to find out what American workers regret the most, and here's what they had to say.

Many people would rather sit back and let others take the lead at work. This especially makes sense if you're new to your career or company and feel more comfortable being told what to do than making those decisions yourself. But not taking initiative is something you might regret in the short term, especially if it ends up costing you a promotion or raise. So think about the things you could be doing to add more value to your team or company and run with them. Chances are, your boss will take notice and reward your efforts. 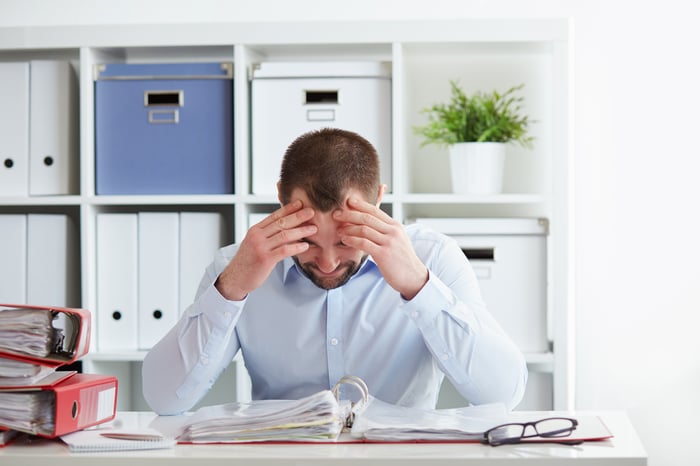 Regret #2: Not having enough mentorship or guidance

Having a mentor can help you grow professionally and avoid many of the mistakes your peers might otherwise make. If your company doesn't have a mentoring program in place, find your own. Get to know some of your more seasoned associates at work and let it be known that you're looking for direction. Or invite some of your more experienced colleagues to lunch here and there and pick their brains. You don't need a formal mentor to benefit from one, so get creative in getting the guidance you need to excel.

The last thing you want is to get excited about a novel idea only to have it blow up in your face. But actually, it's often better to try and fail than to never try at all, so the next time you're in a work situation that involves taking some risks, go for it. Granted, you'll want to think things through before moving forward to avoid a potentially embarrassing situation, but if you have reason to believe that an idea of yours will work, don't give up on it just to play it safe. If you do, you might lose out on the chance to advance your career and impress others with your innovation.

Regret #4: Not maintaining a business network

When it comes to succeeding at your career, the people you know are often your greatest asset. And while building a business network is a smart move that can help you in the long run, you shouldn't make the mistake of letting those connections fall by the wayside. So comb through your list of contacts and set up a schedule wherein you're checking in with those people on a regular basis. Set calendar reminders to send out quarterly or monthly emails, and keep tabs on the latest industry conferences and seminars to snag some face time with your contacts. The more of an effort you make to maintain your relationships, the better they'll serve you in the long run.

There are plenty of reasons to stick things out at a bad job. Maybe your work is dull and uninspiring, but your salary is decent. Or maybe your boss is a nightmare, but you get along well with your colleagues. No matter the circumstances, once you get to a place at which your job is actually making you miserable, and you're carrying that misery outside the office and into your personal life, it's time to cut the cord. Quitting a bad job doesn't make you a failure; if anything, it's a sensible move that can lead to better opportunities that not only make you happier but help your career move forward.

It's easy to look back on the choices we've made and wish we could've done things differently. Now that you know what career decisions Americans tend to regret the most, you can do your part to avoid falling victim to the same set of circumstances.