Earlier this week, Fuel Systems Solutions (NASDAQ: FSYS) announced that its shareholders had approved its planned merger with Westport Innovations, Inc. (USA) (NASDAQ:WPRT), even after a very public "no" vote by a co-founder with a large stake. The merger was finalized on June 1, and the new company will officially be called Westport Fuel Systems, and trade under the current Westport tickers on the Nasdaq and Toronto stock exchanges.

Despite the controversy created by a disgruntled co-founder, Fuel Systems shareholders overwhelmingly approved the deal. Frankly, it's almost certainly in their best interests to see the two companies combine. Here's a look at why.

Breakdown of the merger agreement

That means current Westport shareholders will see their individual pieces of the company pie get cut down; but let's remember that the pie is getting bigger as a result of the deal.

What Westport gets from the deal

To start, Fuel Systems has a much-better track record than Westport of profitable results, and much-better cash-generating operations: 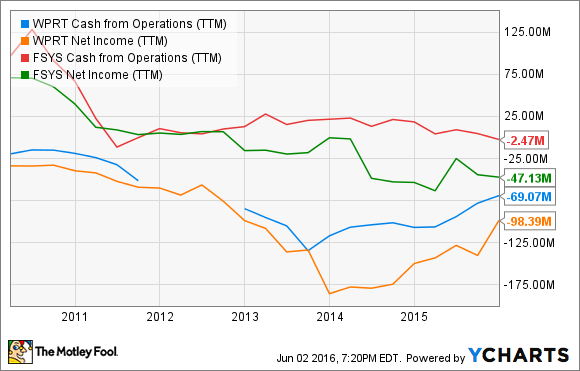 There's a big difference between cash from operations and profits, but profits can be a product of non-cash items -- so it's not a perfect measure, either. At the same time, Fuel Systems also brings a clean balance sheet into the marriage, with basically zero debt, and almost $50 million in cash and equivalents.

Combined with its own ongoing operating cost improvements, Fuel Systems' operations and cash infusion will make a big difference in helping the Westport side of the family become sustainable. Frankly, as things stood coming into the merger, Westport's own cash flows and income from its joint ventures weren't likely going to be enough to keep the company afloat long enough for one of its in-development products to catch on.

In no uncertain terms, this deal may have been a lifesaver for Westport's future as a stand-alone company.

Why it's good for Fuel Systems

As the table above shows, Fuel Systems' revenue, like that of Westport, has been heading the wrong way during the past several years. This has been partly due to the cyclical impact of the oil crash significantly reducing demand for natural-gas vehicles in North America. Furthermore, a weak economy in Europe -- one of the things that has been partly responsible for the oil crash -- has also weakened demand for NGVs in those markets, where there is a significantly larger market for natural-gas-powered automobiles.

By combining the two companies -- which have less overlap in the areas in which they compete than one would think -- Fuel Systems becomes part of an organization that participates in essentially every segment of the natural-gas-vehicle space, from small, purpose-built industrial engines all the way to heavy-duty trucking, and even locomotives. The result should be a company with high-quality cash flows that help sustain it through cyclical downturns. It also means it can continue to make investments in next-generation technology across the entire NGV and industrial alt-fuels space.

There's no getting around the short-term winner being Westport, because the bolstered balance sheet, and more-reliable cash flows provided by Fuel Systems will help bridge the gap to the commercial launch of HPDI 2.0 later this year. But in the long term, there's hope that, by joining the two small companies together, the larger entity should be in a better position for growth, and to fund product development. And that's good for the industry, as well as the company.

Will it play out that way? Only time will tell, and a lot of that responsibility will fall on Chief Operating Officer Nancy Gougarty to combine the two companies. It's not easy to keep what makes a company great while cutting out the fat. The cuts need to happen, though, and only time will tell if the right ones are made.