U.S. stocks suffered sharp losses on Friday in the wake of the U.K.'s "surprise" vote to secede from the European Union, with the benchmark S&P 500 (SNPINDEX:^GSPC) and the Dow Jones Industrial Average (DJINDICES:^DJI) down 3.6% and 3.4%, respectively.

The UK's loss is your gain: 3 Stocks to capitalize on Brexit

Perhaps this column ought to be taking a victory lap. On Tuesday, I wrote in Why Financial Markets Are Getting Brexit Wrong, that: "[P]rofessional investors appear to be significantly underestimating the odds of a "Leave" victory in this Thursday's [Brexit] referendum... The numbers suggest to me that [the risk of Brexit] is highly significant."

Today's carnage in currency and equity markets suggests that investors were ill-prepared for this possibility. But the reality of human affairs in the modern world is infinitely complex, and it's best to remain humble.

As I observed in the conclusion of Tuesday's article: "Will we know what the ex-ante probability [of Brexit] was once the outcome of the vote is known? No, and that what's makes the financial markets so fascinating."

In other words, even after the fact, there's no way to know how probable yesterday's "Leave" vote really was. Still, the point I was trying to make on Tuesday is that, given the available polling data, I didn't see how any rational observer could conclude the vote was much different than a 50:50 proposition. There was certainly no way to categorize Brexit as "tail risk," which is what professional investors -- and many other "professionals" – did.

The market pendulum: From complacency to overreaction

However, because the markets underestimated the odds of Brexit going into the referendum, I think investors are effectively overestimating the impact of a result it did not expect. Rather than accept the uncertainty inherent in the situation, and bear the resulting near-term price volatility, isn't it easier to assume the worst, and sell indiscriminately? I'm describing the market's logic -- this is not my advice.

The most obvious example of this can be found in the financial services sector, and particularly, with regard to banks – which are particularly sensitive to sentiment regarding the macroeconomy and fear of financial instability. U.K. bank shares suffered heavily today, which was predictable, but the KBW NASDAQ Bank Index, which is made up exclusively of U.S. banks, was also caught in the downdraft, down 7.3%.

It's very difficult for me to come up with a rational explanation for giant custodian banks Bank of New York Mellon Corp (NYSE:BK), Northern Trust Corporation (NASDAQ:NTRS), and State Street Corp (NYSE:STT) being worth between 8% and 9% less today than they were at Thursday's close. Take Bank of New York Mellon: Just more than three-quarters of its entire balance sheet is U.S. assets, with Europe representing just less than one-fifth.

Yes, there are second-order effects that go beyond banks' business in the U.K. It's likely that yesterday's vote will have pushed back the Federal Reserve's calendar for future interest-rate hikes, to name but one. (The Fed Funds futures market certainly adjusted its view sharply today.) That is not particularly bullish for the ability of banks to earn higher net interest margins.

Nevertheless, a 8% to 9% haircut looks like a stiff haircut; too stiff.

The nation's 3 universal banks on sale

The same looks true of the top-three universal banks: Bank of America Corp (NYSE:BAC) (-7.4%), Citigroup (NYSE:C) (9.4%), and JPMorgan Chase (NYSE:JPM) (-6.9%). Their shares looked reasonably priced yesterday -- hardly a "gimme" in the current stock market -- and they look even more attractive today, by my reckoning. The world is different today, yes -- just not negative 9% worth (in Citi's case). 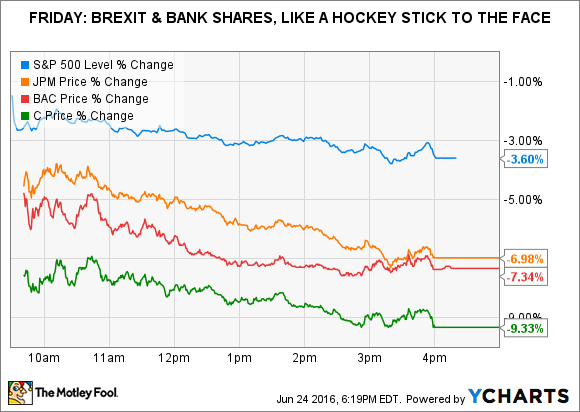 There is even a potential positive catalyst for these banks in the near term: On Wednesday, after the market close, the Federal Reserve will release its assessment of the largest banks' capital return programs. Look for the banks to announce plans with regard to dividends and/or share repurchases in the wake of these results, which could reverse part of today's losses. Stock pickers ought to look at these banks before then.