After a quick glance at Baker Hughes' (BHI) second-quarter net income result, you might ask yourself where the heck that $3.5 billion merger breakup fee from Halliburton (HAL 2.59%) went. Don't worry, it's in there. It just helped to cover up for the $2.8 billion in asset and goodwill writedowns the company took in the recent quarter as well.

Let's take a little deeper look into Baker Hughes' second-quarter numbers to see where the company stands now that we know it's going to be on its own for a while.

There's a lot to unpack in this result because the company took some pretty large charges to the income statement while also getting a decent injection of cash from the acquisition termination fee. So, here's how it all broke down.

Taking large asset writedown and goodwill charges has been a pretty common theme this quarter. Schlumberger did its own $2.5 billion in writedowns this quarter, and Halliburton's charges were $3.6 billion since it was on the losing side of that merger termination fee.

The figure that should be concerning, here, is that Baker Hughes' cost of revenue was higher than its total revenue numbers. We can suppose that since the company was caught up in merger talks for more than a year, it may not have done as much cost cutting as it should have since it assumed some of its business segments would have to be sold off. Today, that's coming back to bite the company a bit, so hopefully it will be able to correct this issue in the coming quarters. Based on the geographic breakdown of earnings, this is an issue across all segments of the business. 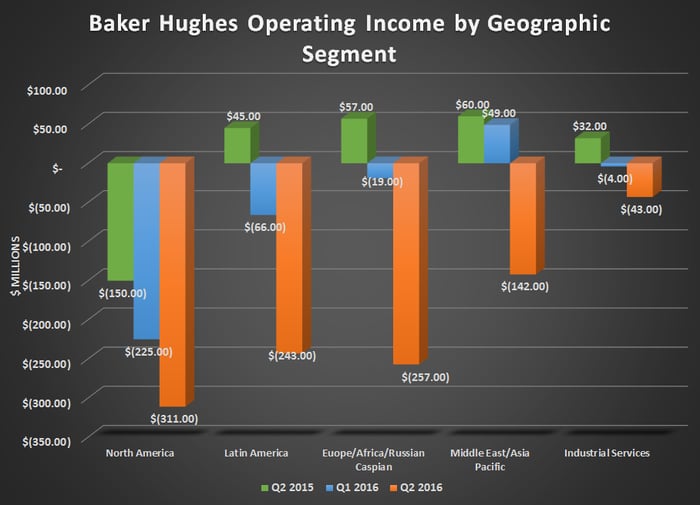 Immediately following the breakup in May, the company did lay out a strategic plan that will involve removing about $500 million from its cost structure by the end of the year. That will certainly help get the business back on the right foot, but it will likely take more than that over the next couple of years to get Baker Hughes up to the levels of returns its peers have been achieving as of late.

Bad for earnings, good for the balance sheet

For all the faults in the company's earnings result, Baker Hughes used that $3.5 billion cash injection rather wisely to clean up the balance sheet. In the quarter, it extinguished $1.1 in long-term debt to give the company a much healthier total debt to capital ratio of 17.4%, which put it in much better shape than Schlumberger at 32%, or Halliburton at 57%, and it even has more cash on hand than total debt. If there was an opportunity out there to make a smaller acquisition in the oil services industry, Baker Hughes is by far in the best shape financially to do it.

At the same time, the company also used $500 million of that cash to buy back its own stock. With shares trading at some of their lowest levels since the recession in 2008, you can't really blame the company for buying highly valued stock today.

Although the company did lay out a plan it thinks will work for it in the coming years, Baker Hughes doesn't think demand for oil services will do it any favors. According to CEO Martin Craighead, the company is doing its part, at least.

In the midst of these structural changes, and while we are facing an extremely tough market environment, I am encouraged to see that our second quarter revenue declined only 10% sequentially despite a 19% drop in the global rig count. The decrease in revenue is driven primarily by a continued steep decline in activity and pricing pressure, mainly in the Eastern Hemisphere. Operational losses for the quarter increased sequentially as a result of inventory writedowns, provisions for doubtful accounts -- primarily in Ecuador, and valuation allowances on indirect taxes. Cash flows from operating activities for the quarter were $3.6 billion, largely as a result of collecting the merger termination fee.

In the second half of 2016, excluding the seasonality in Canada, we do not expect activity in North America to meaningfully increase, as our customer community requires a more sustained oil price improvement before committing to any material increase in spending. On the other hand, activity internationally is expected to continue to decline in most countries, with a steeper decline in markets with higher lifting costs. As a consequence of this outlook, we expect pricing to remain challenging. Margins across all of our segments are expected to improve sequentially as we begin to see the full benefit of the restructuring actions taken this quarter.

Baker Hughes' results didn't look great this quarter, but the company did put that $3.5 billion to good use, and it should set up the company's balance sheet rather well as it works through its operational issues. The potential deal with Halliburton put a lot of restructuring efforts on pause, so the company has some catching up to do. For investors, it will be worth watching to see if Baker Hughes can get its costs under control in the next few quarters and start delivering returns. Until it does, though, this is still a company to watch from the sidelines.

Tyler Crowe has no position in any stocks mentioned. The Motley Fool owns shares of Halliburton. We Fools may not all hold the same opinions, but we all believe that considering a diverse range of insights makes us better investors. The Motley Fool has a disclosure policy.