If you bought Starbucks' (NASDAQ:SBUX) stock during its initial public offering in 1992 -- and simply held onto it -- you'd be sitting on a mountain of caffeine-fueled profits. Starbucks is up 160-fold since the IPO, compared to a quadrupling of the broader market.

You'd also be holding many more shares than you started with, since the stock has split six times over the years. 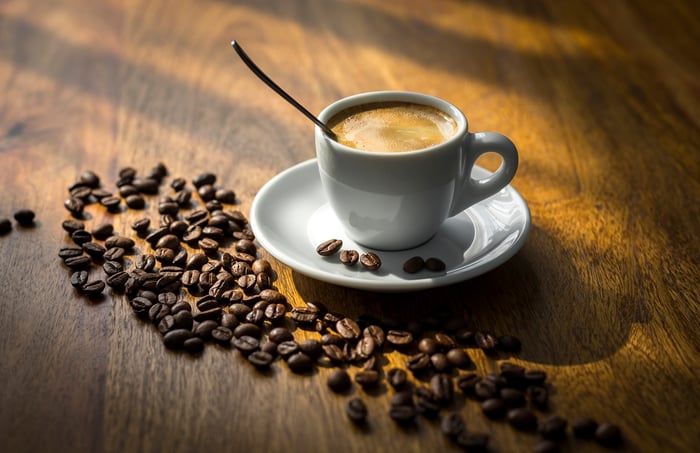 Starbucks' stock splits have all been two-for-one transactions, meaning that shareholders received two shares for each single share that they owned. The company made its first split in early July of 1993. Starbucks' most recent stock split was on March 18, 2015.

Every two-for-one split effectively doubles your share count. For example, 100 Starbucks shares held on June 30, 1993, would have turned into 200 shares after the first split occurred on July 1.

A split has no effect on the value of your investment. Starbucks' total share count doubled each time that it split the stock and so a shareholder's ownership level remained unchanged by the shift.

It's as if Starbucks made additional cuts to a pizza so that an 8-slice pie became a 16-slice one. Each diner still claims the same amount of pizza relative to the total, but their slice count has doubled.

While there's been no financial benefit from the stock splits, they have produced huge growth in the volume of Starbucks' shares. Sticking with the earlier example of buying 100 shares at IPO and holding, you'd be looking at 6,400 shares immediately following the last split. Benefits of a split

There are benefits to a stock split even though it doesn't raise the value of your investments. By lowering the price of Starbucks' stock, management makes it easier for individual investors to buy and sell shares. Had the stock not split at all it would be priced at nearly $3,000 today, putting it out of reach for many investors to even purchase a single share.

A stock split also signals that executives are optimistic about the company's future. While announcing the last split, CEO Howard Shultz said it "takes place at a time when Starbucks shareholders are experiencing an all-time high in value as we continue to deliver world-class customer service and, in turn, record profits and revenue."

Starbucks' business has gotten stronger since Shultz said those words. Revenue is up 10% through the last nine months and operating profit has grown even faster -- up 12%.

Share price appreciation has been muted, though, as the company just revealed a growth slowdown in the key U.S. market. Comparable-store sales gains fell below 5% there for the first time in over six years.

Schultz and his team believe they'll quickly get back above that 5% mark, with help from a hugely popular loyalty program, along with initiatives like an improved food menu, online ordering and delivery, and small-footprint stores.

It last took about a decade between stock splits for Starbucks' business -- and its share price -- to climb to the point where another split made sense to management. It's anyone's guess when the next share count boost could happen, though, and that's why shareholders are better off following trends in operating metrics like comps and profitability.

More than most other stocks on the market, Starbucks has rewarded its patient shareholders with epic long-term returns. Net income was $2.4 billion last year -- up from $500 million a decade prior. Stock splits have been a consequence of that impressive growth and so they're likely to continue as long as the coffee giant keeps outgrowing the market.