Ford's annual Investor Day conference for analysts is on Wednesday. Here's what Ford will likely address -- and why it matters to investors.

Ford CEO Mark Fields discussed the Blue Oval's future "mobility" strategy in a presentation earlier this year. Expect that strategy to get a lot of play during Ford's conference for investment analysts this week. Image source: Ford Motor Company.

Ford Motor Company (F -0.75%) will host a daylong conference for investment analysts on Wednesday, as executives seek to reassure wary investors that the Blue Oval remains on a positive course.

What this conference is about

Ford's Investor Day conference is an annual event. Typically, senior executives including CEO Mark Fields and CFO Bob Shanks review Ford's recent performance around the world, dig into the company's current initiatives and plans for the near future, and present the company's guidance for the coming year.

In the past, the sessions have been full of good news for investors. But this year's event might be a different story.

The big questions that Ford will be asked to address

Investors are clearly concerned about the Blue Oval. For starters, Ford's stock has had a rough ride in 2016. 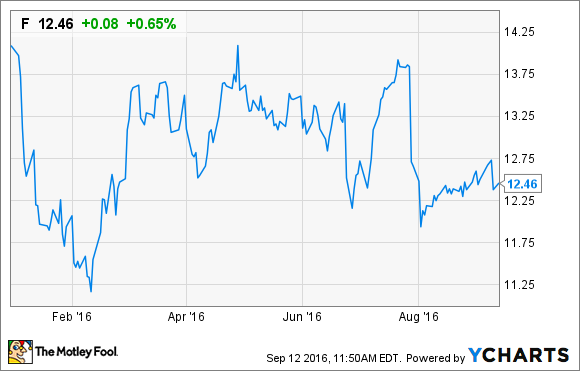 While Ford continues to execute well, generally speaking, there are some real concerns. I expect Ford's leaders to dig into these in some detail.

What Ford will want to discuss

Of course, Fields and company will have their own list of things they want investors to know about Ford's current and future efforts.

The upshot: An important day for Ford investors

Only Wall Street analysts are invited to attend the conference in person. But your humble Fool will have a copy of Ford's presentation and will be able to listen in by phone. It's very possible that some of what Ford says (particularly its 2017 guidance) will have a near-instant impact on its stock price; if so, I'll have all the details to share with you.