Rooftop solar could be SunPower's savior in 2017. Image source: SunPower.

If one only follows stock prices, SunPower (NASDAQ:SPWR) looks like a solar company that should be lining up a bankruptcy filing any day now. The stock cratered after the second-quarter 2016 earnings report (covered here) and has accelerated its slide this week. The question is: Is SunPower really close to bankruptcy, or does the market have this stock wrong? 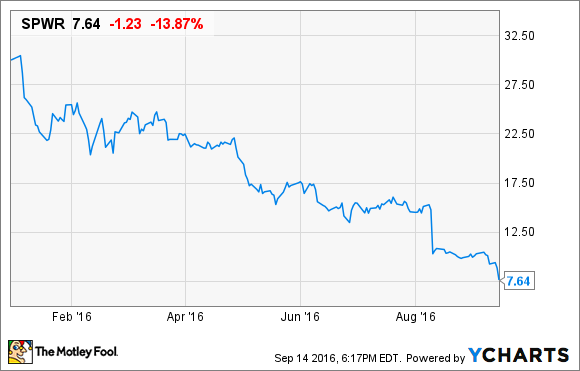 When solar manufacturers have gone bankrupt, it's been primarily because they borrowed money to build out manufacturing capacity and then didn't generate the cash flow, or gross margin, they needed to justify the investment. Eventually they were done in by investors lacking interest to provide new debt and/or equity to stay afloat. In an environment of falling solar-panel costs, you can see how that could happen. Suntech Power, LDK Solar, and Energy Conversion Devices are just a few companies done in by this phenomenon.

The more recent challenge solar companies have run into is a continual need of financing that eventually breaks down. This happens to companies that build and own solar systems. I call it the house-of-cards effect. It's what did in SunEdison and is currently haunting SolarCity (NASDAQ:SCTY.DL).

This house-of-cards effect develops because a solar company builds solar projects and then wants to hold them on the balance sheet -- or, in SunEdison's case, in a yieldco -- long term to extract maximum value. You build a project; sell tax benefits, state or federal incentives, and future cash flows to investors; and pocket the profit that's left over. Hypothetically, a company could lather, rinse, and repeat in perpetuity.

Problems with this model erupt only when investors lose confidence in your business for some reason, making it more costly to borrow money for the next project. If borrowing costs go up enough, projects are built at a loss and that causes investor confidence to fall further -- the downward cycle has begun.

I highlighted this house-of-cards phenomenon in SunEdison over a year ago, and SolarCity is starting to show some similar signs of stress as its cost of capital rises. The canary in the coalmine is rising interest costs on a business in continual need of debt.

What's unusual about SunPower is that it has manufacturing and builds projects on the balance sheet. So both financial problems could be converging in one company.

Does SunPower have a debilitating debt problem?

The core of the problem when solar companies go bankrupt is really about too much debt. And with $2.04 billion in debt, it looks like SunPower has a real problem on its hands. But we have to go beyond the headline debt number to show where that debt comes from to get a true picture of what's going on.

Below I've broken down the sources of SunPower's debt, as well as the interest rates and maturities associated with that debt.

When it comes to the liquidity of running the business, there aren't any big maturities on the horizon until June 1, 2018, when the 0.75% convertible note is due.

What's notable is that all of this $871.2 million in debt is associated directly with projects, and none of it is recourse to SunPower. And the company is planning on selling most of those projects in the next six months, so a lot of the debt could be erased by the end of the year. For example, Henrietta and 68 MW of the Stanford project are on 8point3 Energy Partners' (NASDAQ:CAFD) right-of-first-offer portfolio for 2016, so they have a buyer already.

By the end of the year, SunPower will likely sell the first five projects listed above, which would reduce debt by $642.3 million. And it could generate net positive cash from those sales, meaning it could add to its $590.1 million in cash on the balance sheet.

This doesn't take into account the recurring funding needed to build power plants in the future, though, which should be examined. What's unusual this year is there's very little needed for new funding after 2016 ends. SunPower is in the process of completing 575 MW of projects, and the only project on the horizon in 2017 is a 111 MW project in Chile that will likely be purchased by SunPower's parent, Total (NYSE:TTE).

SunPower will likely be deleveraging its balance sheet by the end of the year by selling projects and has very little in the way of large, new financing needs in 2017. It has to fund commercial and residential projects that will go on the balance sheet, but the company sells about 70% of its residential solar systems for cash, and it recently got $200 million in financing for commercial projects that allow it to fund 100% of those projects with debt.

It looks like SunPower is dismantling a potential house-of-cards effect right now, rather than making it worse by trying to grow the number of systems on the balance sheet.

What about rising financing costs?

On May 4, SunPower entered into a revolving credit facility with Mizuho and Goldman Sachs for up to $200 million at LIBOR plus 1.5%. That's an incredibly low rate when you consider that on the same day SolarCity entered into a revolving aggregation credit facility at LIBOR plus 3.25%. And SolarCity's 18-month solar bonds just sold with an interest rate of 6.5%.

It looks like SunPower still has industry-low cost of capital and isn't anywhere near panic mode on the financing front. Alarm bells went off when SunEdison got financing for LIBOR plus 10%, but you'd be hard-pressed to find a large company with borrowing costs as low as SunPower's today.

SunPower isn't built on a house of cards, because its project funding needs are going down, not up, and interest rates look like they're still very low. Plus, there are no major debt maturities for nearly two years. So where is the risk in the company?

The answer lies in SunPower's need to continually sell solar panels and components to customers to generate cash to fund operating costs. SunPower has a little over $400 million in annual operating costs, and if it can't generate that much in gross margin, it will start to burn through the $590 million in cash currently on the balance sheet. On top of this, SunPower has contractual obligations to buy polysilicon and other raw materials from suppliers for solar panels.

In other words, if demand for solar panels drops, SunPower is in trouble. And if you look at the anticipated drop in U.S. utility solar demand in 2017, it's easy to see how next year could be really bad. I highlighted in a recent article that fundamental utility solar demand will fall from about 18.5 GW for 2016 at the end of last year (many projects were delayed after the ITC extension) to just 3.1 GW of new demand for 2017. That kind of demand drop is how solar companies start losing money.

The risk for SunPower is a wholesale drop-off in solar panel demand and pricing, resulting in a huge cash burn to keep manufacturing plants running and pay operating costs. And that's possible in 2017, which is probably a bigger concern than a credit crunch.

The savior waiting in the wings

SunPower has a lot of risks ahead with uncertain solar demand in 2017, but it has an ace up its sleeve as well. Total owns two-thirds of the company and probably doesn't want to see that investment go up in smoke if there's a gap in demand for a year or two (2018 and 2019 projects are already flowing in). Total could provide a line of credit or back a debt offering, as it has done in the past, keeping SunPower afloat until better days arrive.

That's worth considering if you're betting on a SunPower bankruptcy. Total would have to allow it to happen, and I don't see that being likely, given Total's financial interest in the company.

Is disaster on the horizon?

When you look at the full picture at SunPower, there's a lot of uncertainty and risk, but I don't (yet) see the telltale signs of a solar company that's in serious financial trouble. It doesn't continually need cash to finance projects, debt costs aren't rising rapidly, and there are no debt maturities on the horizon.

SunPower has to get through a rough next 18 months, but after that, U.S. demand will start to pick up again and the company can start building 800 MW of projects that are already contracted in Latin America.

Of course, all of this can change if panel prices drop too far or if SunPower generates lower margins than anticipated. So stay tuned for my updates on the company's health in coming quarters.