Smaller Fords like the Focus have long been popular in South America. But a steep recession in Brazil, the region's largest market, has made profits hard to come by in recent quarters. Image source: Ford Motor Company.

Ford Motor Company (NYSE:F) had said that its third-quarter profit would be much smaller than it had been a year ago, and it was right. The Blue Oval earned $957 million in net income last quarter, down 56% from $1.9 billion in the year-ago period.

Much of that drop had to do with events in North America, some of which were one-time factors. But a $295 million loss in South America didn't help. Here's the story.

Ford is trying to make the most of a tough market

Ford's loss in South America was a significant decline from its $165 million loss a year ago. It wasn't a fluke: All of the key metrics were down year over year. 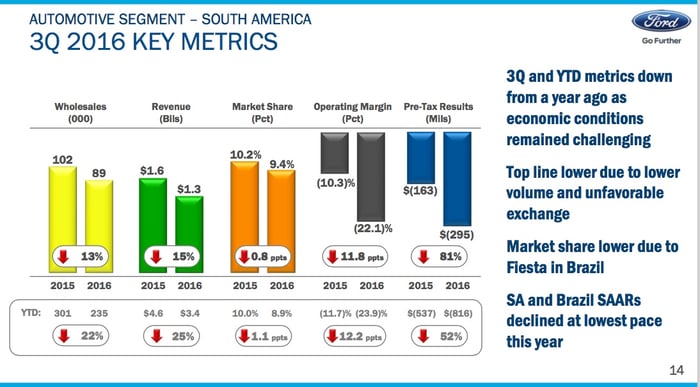 As CFO Bob Shanks explained during Ford's third-quarter earnings call, that drop was due to one big factor: Times are tough in places like Brazil. Shanks said:

You can see both for the third quarter and year-to-date, all the metrics were lower. This is driven by the external conditions in South America, which remain challenging. If you look at the metrics, the top line [revenue] was lower. That was driven both by [sales] volume and by the weaker currencies. Our market share was lower. That was due to Fiesta in Brazil. And in terms of SAAR ["seasonally adjusted annualized rate", a metric showing the pace of auto sales], South America itself was down 400,000 units or 10%. That was entirely driven by Brazil, which was down 400,000 units or 17%. 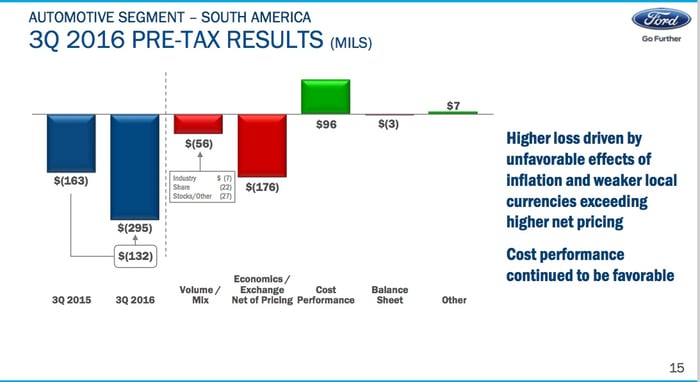 He said, "Turning to the next page, looking at what's behind the $132 million decline in South America. It's a very, very similar pattern to what we showed you in the first and second quarters."

Shanks said during Ford's second-quarter call that Ford was fighting the effects of inflation and weakening local currencies, as well as competitors that had resorted to very steep discounting. Ford responded by focusing on its most profitable products in an effort to limit losses, but lost market share.

The story wasn't much different this time around, Shanks said. But he pointed out that Ford's team in the region was able to offset some of the losses with cost cuts:

While we're pricing as aggressively as we can, you can see that it's not enough to offset the effect of high inflation as well as a negative operating exchange effects. The volume and mix is a bit lighter than what we've seen in the past, but we're still going after cost improvements. And you can see that we generated nearly $100 million [in cost savings] in the quarter that was both contribution cost and structural cost.

Looking ahead: Reasons for optimism?

Shanks reiterated Ford's previous guidance for South America: It expects its full-year loss in the region to be greater than the $832 million it lost in 2015. But he hinted that the light at the end of the tunnel might be starting to come into view. Shanks stated:

We are starting to see a number of economic indicators that, while they're still negative, they're starting to turn upwards. And so I think we feel comfortable that at least the direction of the economies in South America seemed to be moving in a positive direction and supportive of our view that we could see next year the first positive growth, although very, very modest compared to where it's been in the past. But there are positive signs.

How positive? We'll know a little more when Ford presents its 2017 guidance in January.