Low-cost leases have helped Ford and its rivals sell more higher-priced vehicles like this F-150 King Ranch. But with so many vehicles coming off lease, falling used-car prices are denting profits at Ford's financing unit. Image source: Ford Motor Company.

On Thursday, Ford Motor Company (F -5.55%) lowered its 2017 pre-tax profit forecast for its financial-services unit by $300 million to about $1.5 billion, on declining auction values for used vehicles.

What Ford said about its lowered guidance

During a briefing for analysts on Thursday, CFO Bob Shanks said that Ford Credit, the company's in-house financing arm, is lowering its outlook for auction values across its portfolio. That in turn led it to lower its 2017 profit forecast.

What does that mean? Ford Credit offers lease contracts to Ford customers. The biggest factor in pricing a lease contract is what we call residual value, the estimated value of a vehicle at the end of the lease -- or more precisely, the difference between that and the vehicle's price when new. It's that difference that the payments under the lease have to cover.

Over the last few years, more U.S. new-car buyers have chosen to lease their vehicles. That means that more vehicles are coming off lease and going to used-car auctions, where they're resold to dealers -- but demand for used cars isn't rising enough to keep up. 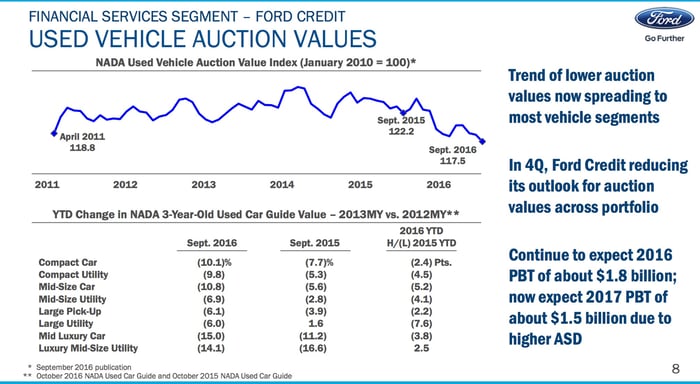 As we all know, when the supply of something increases while demand remains stable, prices tend to fall. As you can see from the slide, the data shows that used-car values are now falling in nearly every market segment. That in turn means when Ford Credit resells the vehicles returned from leases, it's getting a bit less for them than it expected at the beginning of the leases.

The upshot is that Ford expects no significant impact on Ford Credit's fourth-quarter 2016 result. But its 2017 profit will be less than Ford had anticipated a few months ago.

During his presentation at Ford's Investor Day in September, Shanks said that Ford Credit expected to generate about $1.8 billion in pre-tax profit in 2017. Thursday's forecast trims that by $300 million, to $1.5 million.

But, he said, that doesn't change the general direction of Ford's profit guidance for the next couple years. 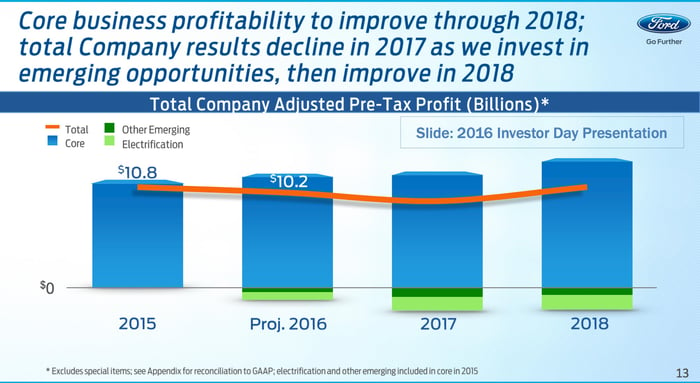 For the most part, Ford has only given broad guidance for 2017 and 2018. Shanks said in September that Ford expects total pre-tax results for its "core business" (auto-making and Ford Credit) to improve in both 2017 and 2018 over 2016. But it expects overall pre-tax profit to be lower in 2017 than in 2016 because it's making a bunch of investments in future technologies and emerging mobility-related opportunities. It expects its overall pre-tax profit to rise again in 2018.

Shanks reiterated that general guidance on Thursday, with the caveat that pre-tax profit in Ford's core business will be trimmed by $300 million from his expectation in September.

The upshot: Get ready for higher lease prices, and not just from Ford

Ford won't be the only company giving this kind of guidance. It has been clear since the beginning of the boom in leasing that eventually all of those leased vehicles would find their way to used-car auctions, creating the possibility of a market glut.

"Glut" probably overstates the current situation. But there are more vehicles coming to auction now than there were a year ago, and demand hasn't kept pace. That will impact other lease providers -- and lower residual values for new cars will make leasing a bit more expensive going forward.

Will that hurt new-car sales -- or lead buyers to choose less-expensive vehicles? It's not clear yet, but we'll be watching.