Even CEOs have to answer to somebody.

Who calls the shots at a public company?

CEOs run businesses on a day-to-day basis and are often in the limelight. But there's a group of people, you may not know about, who have the ultimate authority: the board of directors. 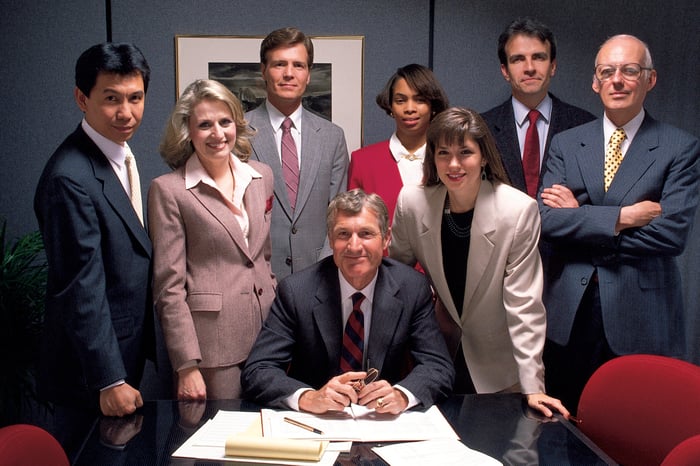 Generally, "the role of the board is to oversee the affairs of a company from 50,000 feet, to ensure the long-term sustainability of the company," said Henry Stoever, chief marketing officer of the National Association of Corporate Directors (NACD). Activist investor board members, though, may take on a more involved role.

"They are there to hire and fire management -- and monitor them in between," added Charles Elson, the director of the John L. Weinberg Center for Corporate Governance at the University of Delaware.

Corporate board requirements are largely governed by the state or country in which a company is incorporated, but boards are also increasingly subject to federal legislation and stock exchange listing standards.

Directors' actions can have a critical impact on a company's profitability. As such, it's important for investors to understand the role of corporate boards -- and their role in electing them.

What are some of the key duties of directors?

Directors weigh in on such matters as strategic planning, mergers and acquisitions, share repurchase programs, declaring dividends, and nominating future board members.

Boards are organized around committees that focus on special tasks. For instance, the audit committee works with a company's auditors, while the compensation committee determines executive pay.

Some types of board committees are required for public companies and must meet certain standards for independence, while others are up to the discretion of the company. It's not uncommon for working groups to pop up from time to time to address special issues as needed.

An independent director must meet an even higher standard. On top of being an outsider, he or she must have "no material ties" to the company. For instance, a close relative of a high-ranking executive, or an individual with substantial financial dealings with a company, would be seen as having "material ties."

In the wake of the Enron Corp. accounting scandal of 2001, and the recent financial crisis, institutional investors, regulators, lawmakers, and stock exchanges have pressed for stronger corporate governance and for more independent boards. As a result, in recent years, public companies have moved to increase their ranks of independent directors.

Since the early 2000s, "a considerable number of substantive governance and related disclosure requirements have been imposed on boards and board committees through federal legislation, implementing rules and stock exchange listing standards," the law firm Weil, Gotshal & Manges wrote in a 2015 report.

In 2003, the Securities and Exchange Commission approved listing standards related to corporate boards, proposed by the New York Stock Exchange and the Nasdaq. The rules mandate that that the majority of board members of companies listed on the exchanges be independent.

Even so, critics have questioned whether directors labeled independent actually fit that description.

"In a perfect world we would hope that independent managers are truly independent from management," Elson said. "It's not always the case."

Who typically serves on boards, and for how long?

Outside directors "typically have strong corporate experience, often as CEOs of their own company, or, occasionally, have experience as politicians or college presidents," said Erik Gordon, a professor at the Ross School of Business at the University of Michigan.

A recent survey conducted by The Wall Street Journal found that at 24% of the country's largest companies, a majority of the board had been in place for at least 10 years.

On one hand, longtime directors can offer deep insight into a company, the Journal noted. On the other hand, longtime board members might become too close with management, critics say.

Should CEOs also serve as chairmen of the board?

In recent years, there has been considerable pressure from activist investors and corporate governance experts to split these two roles. Critics see an inherent conflict of interest when the person who runs the company from day to day also heads the board tasked with supervising the company.

Even so, many CEOs still wear both hats. About 56% of S&P 500 companies have a combined chairman and CEO, roughly the same percentage as in 2012, according to an analysis by Mercer.

Companies where the CEO and chairman are one and the same have increasingly added another role, "lead director," to monitor such issues as CEO performance.

How often do shareholders vote on directors, and what should they do to make a wise decision?

Once a year, during proxy season, shareholders have an opportunity to vote on at least some members of the board of a public company. This is your chance to have a say over who leads the company.

You'll want to scrutinize the proxy materials. Take a close look at who has been nominated to serve on the board and ask questions before you make your decision.

"Does this person have skills that would be accretive to the future of company?" Stoever said.

"How independent do they appear to be from management?" said Elson. "Do they have integrity?"

For more information on proxy season, read our primer on proxy statements and shareholder meetings.