Please ensure Javascript is enabled for purposes of website accessibility
Log In Help Join The Motley Fool
Free Article Join Over 1 Million Premium Members And Get More In-Depth Stock Guidance and Research
By John Bromels - Mar 6, 2017 at 8:51AM

The fundamentals of this materials science company may look strong, but there's a big red flag you should know about before you buy.

It's tough to know what to make of Raven Industries (RAVN). This unique little company's stock jumped 62.7% in 2016, handily beating larger peers like 3M (MMM 3.21%), as well as the S&P 500. But companies that defy description can sometimes be hidden buys.

If it's tough to describe Raven, it's even tougher to figure out where the company -- not to mention its stock -- is likely to head in 2017. That's partly due to a huge issue with the company that should worry investors who are interested in buying top-quality stocks. Raven Industries was formed in 1956, when a group of businessmen left General Mills, of all places, to form an industrial balloon company. Over the next few decades, Raven invented the modern hot air balloon and dabbled in other materials science industries like fiberglass tanks, parachutes, cold-weather sportswear, and utility truck bodies. The company branched out into the businesses of flow systems and agricultural control systems in the 80s and 90s.

Even with its 2016 performance, Raven is still a small company, with a less than $1 billion market cap. So, let's look at how such a small-yet-diversified company managed to crush the market last year.

As you might expect with a small-cap company, Raven's growth was very lumpy throughout 2016, in sharp contrast to the much larger 3M and the S&P: 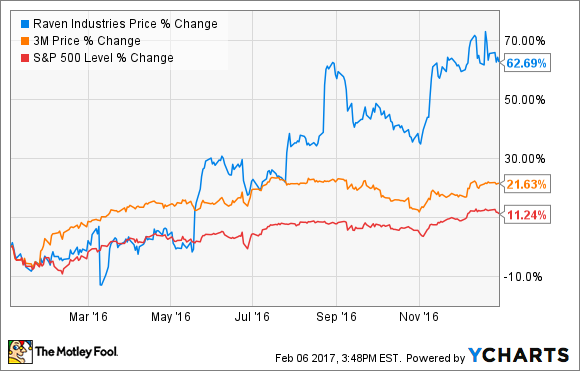 But as you can see, one of the biggest jumps of the year for the company came, unsurprisingly, in the wake of Donald Trump's upset win in the November election. Such a win was seen as a boon for construction companies because of a potential major infrastructure package, for defense contractors because of potential increases in military spending, and for energy companies because of the potential removal of environmental regulations.

Raven Industries operates in all of those fields, manufacturing films for the construction industry, surveillance balloons and equipment for the military, and films to contain fracking waste. No wonder the market has high hopes for the company going into 2017.

Of course, considering the amount of opposition on Capitol Hill to some of President Trump's policies and proposals, it would be a risky bet to buy Raven's stock solely on speculation about his agenda without more details about how it might be implemented -- and whether Congress is buying in to his proposals. But there's an even bigger risk for potential Raven investors.

Raven is in an unusual situation in that, as of early February, it was in non-compliance with NASDAQ rules for failure to submit quarterly reports to the SEC. Since then, the company has filed five quarterly SEC reports, including amended Q3 2016 and full-year 2016 reports, as well as an amended Q1 2017 report and Q2 and Q3 reports.

The company hadn't held an earnings conference call since March 2016, but it finally held one on February 16th. On that call, as you can imagine, there was a heaping helping of humble pie served up by CEO Dan Rhykus. "I'd like to address our reevaluation of our internal control framework and the controlled deficiencies we identified," he began, before stating the following:

We are responding with the utmost urgency and diligence to remedy the situation and to ensure that we maintain a more proactive approach to adapting the changes in the future, so that our framework design appropriate adapts to whatever changes our business may experience in the future or to changes in the regulatory environment. As we work to remediate these material weaknesses and enhance our control's framework, we will keep you fully informed and updated.

Essentially, management discovered that "The  Company's  controls  relating  to  the response  to  the  risks  of  material  misstatement  were  not  effectively  designed," according to the company's amended 2016 10-K. Specifically, these control issues could -- and did -- lead the company to misstate items including goodwill, long-lived assets, income taxes, and inventories on its quarterly and annual reports.

While many of these misstatements were comparatively small -- selling, general, and administrative expenses, for example, were revised upwards by just $20,000 for FY 2016 -- some were far more significant. Long-lived asset impairment losses of $3.8 million, for example, weren't even included in the original 2016 10-K, and contributed to a $6.7 million drop in EBIT on the amended report. That in turn helped to drop annual EPS from $0.23 (original) to $0.13 (restated), a major change.

What's of more concern than these identified issues, however, is the possibility that there are other problems that haven't yet come to light.

There's certainly a case to be made that -- with its reporting now up-to-date and with remediation efforts under way -- Raven's troubles are behind it, and it's a safe investment moving forward. Plus, the company's reported third-quarter earnings were actually pretty impressive. Operating income was up 175% year over year, for example. So maybe I'm being overly cautious when I say that I don't feel comfortable investing in Raven until it can provide concrete assurances that it has its house in order (remember, the company hasn't yet been able to guarantee the issues are solved).

In the third-quarter earnings call, Rhykus has promised to keep investors updated, so I'll be eagerly awaiting those updates. In the meantime, there are plenty of other companies that are generating strong earnings that don't seem to be having the internal problems that Raven is having. If you're interested in materials science stocks, you could consider 3M, despite its middling outlook. For now, though, cautious investors should probably look elsewhere.