Though there are other contenders for the title, AT&T (NYSE:T) may be the best dividend stock on the market today. The telecom giant offers a rare and powerful mix of current yield, long-term dividend growth, and an increasingly strong competitive position within its core markets.

An income powerhouse with few rivals

For starters, AT&T stock currently yields 5% -- which is more than double the current 1.9% yield of the S&P 500 -- better still, the company's actual average yield over the past five years is a slightly higher 5.1%. AT&T has increased its dividends per share annually for the past 32 years, earning it the vaunted title of dividend aristocrat. It has already increased its quarterly dividend by 2% from $0.48 to $0.49 at the beginning of the year.

That may not seem like much of an increase, and indeed, if there is a weak point regarding AT&T's dividend prowess, it lies here. From 2007 through 2016, the company increased its quarterly dividend per share from $0.35 per share to $0.48 each quarter, which equates to an average annual growth rate of just 3.2%. The flips side is that the current yield is already quite generous.

Moreover, AT&T's balance sheet and interest coverage ratios seem safe. Last year, AT&T generated $24.3 billion in operating income, which easily allowed it to service its $4.9 billion in interest expense. The company did, though, pay out approximately 70% of its free cash flow in the form of dividends, which is a bit high. However, given the company's growth outlook, AT&T should be able to fuel further dividend increases by expanding its free cash flow, thanks to some savvy recent moves on the part of its management. 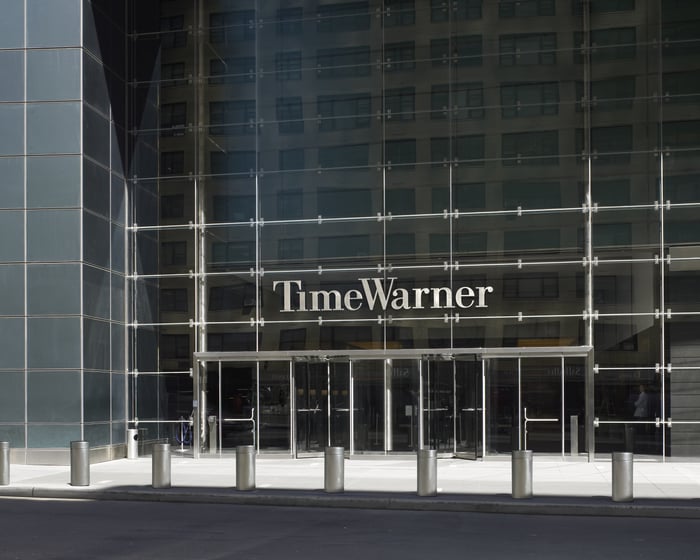 Aside from the massive sticker price -- the 50-50 cash-and-stock transaction will cost AT&T a whopping $85.4 billion -- the deal also helps align AT&T's business with the likely direction of the telecom industry in the coming years. Specifically, this deal should allow AT&T to become one of the first names in the telecom or media industry to package wireless bundles with broadcast cable content, which would see the company playing both offense and defense.

In a world of ever-increasing media-consumption options, content has proved to be a valuable asset. Just think of the number of companies that have been rumored to be working on, or have already launched, video content of some kind, especially among tech companies. Apple, Alphabet, Amazon.com, Sony,Twitter, and Netflix are just a few names to spring to mind. This trend also coincides with ambitions from many of the same tech companies to launch telecom-esque services -- think Google Fiber. In this sense, owning Time Warner's content will increase AT&T's moat and make it hard for tech companies to challenge it for its wireless and broadband subscribers. That's the defensive part of the deal.

Buying Time Warner will also position AT&T to go on the offensive against other telecom and cable distributors. As I've mentioned before, this deal will allow AT&T to pair cable packages with its various wireless and telecom bundles. At a point when only Comcast appears to be headed in a similar direction, taking pole position in the movement to stream cable channels directly to smartphones and tablets should create a powerful incentive to steal consumers away from Verizon, Sprint, and T-Mobile.

Putting all of this together, we see that AT&T shares provide income investors with one of the most potent combinations of current yield and long-term dividend growth. Better still, the future looks increasingly bright for the company, thanks in large part to its Time Warner deal. Combined, these factors are what make AT&T a winning option for retirees seeking the best dividend stocks to own on the market today.