When Donald Trump won the presidential election in November, the unexpected outcome reverberated through the markets. Equities climbed, bonds fell, and the so-called fear index, the VIX, began its descent to today's eerily low level.

Few sectors in the stock market benefited from these trends as much as banks did, and the big banks in particular, including JPMorgan Chase (NYSE:JPM), Bank of America (NYSE:BAC), and Citigroup (NYSE:C). All of these stocks have handily outperformed the broader market since the beginning of November: 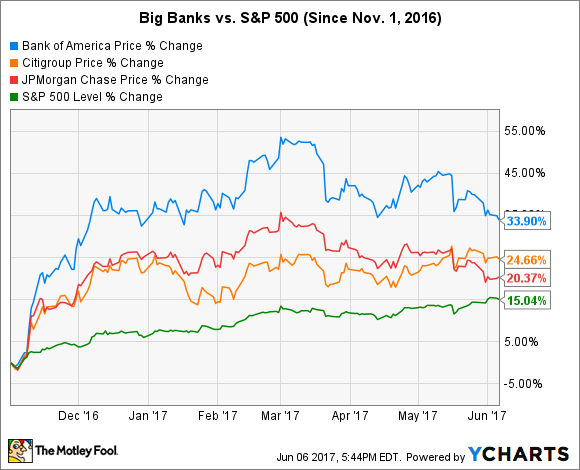 The rationale for this performance has been threefold. First, Trump vowed on the campaign trail to dismantle the Dodd-Frank Act, which was passed in 2010 to combat the abuses that fueled the financial crisis. This would lower compliance costs at banks, and none more so than the too big to fail lenders like JPMorgan Chase, Bank of America, and Citigroup, all of which face heightened regulatory scrutiny under Dodd-Frank given their status as global systemically important banks, or G-SIBs.

Second, Trump also promised to lower the corporate tax rate, from 35% down to 15%. There are short-term downsides to lower taxes from the perspective of Bank of America and Citigroup in particular, as a result of deferred tax assets (click on the link to learn more), but over the long run a 15% corporate income tax rate would allow banks like these to retain or distribute billions more in profits every year as opposed to giving that money to the government.

Finally, Trump's promise to pour money into infrastructure projects, combined with other initiatives, could spur inflation, which would presumably prod the Federal Reserve into raising interest rates. In the immediate wake of the election, in fact, that's exactly what happened, with the yield on 10-year Treasury bonds gaining nearly 100 basis points, or 1 full percentage point. That's a huge move given the size of the market for 10-year Treasuries. 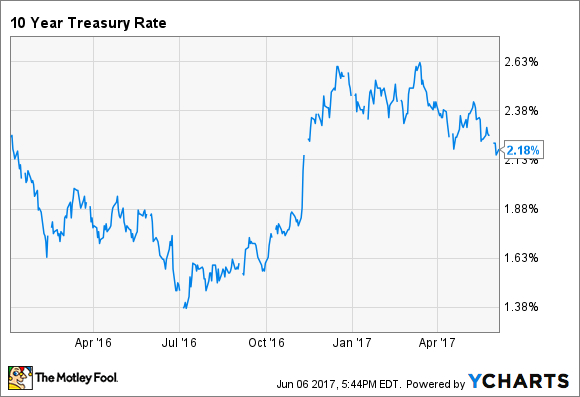 The Fed followed this up in December and March by increasing the Fed funds rate, which is the key short-term interest rate benchmark in the United States, by a combined 50 basis points. These moves have already translated into substantially more profit at JPMorgan Chase, Bank of America, and virtually every other bank in country. The 25-basis-point boost in December alone increased Bank of America's net interest income by just under $600 million a quarter. The further increase in March of this year should add another $150 million a quarter in net interest income.

The bad news for banks now, however, is that interest rates are heading in the opposite direction. The yield on 10-year Treasuries is currently at its lowest point of the year, as investors flood into what many perceive to be the world's safest asset. And assuming that things continue to heat up in Washington, D.C., which seems like a safe assumption, this could get even worse.

The net result is that banks' previous forecasts for higher revenue from net interest income may need to be tempered. And if that does turn out to be the case, then investors shouldn't be surprised to see the news weigh on big bank stocks.